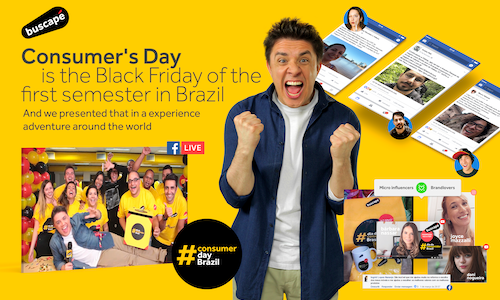 Buscape is the largest website and app to compare prices of products and services in Latin America. The target audience was all consumers, all genders, ABC classes, 18+, connected to the internet. In Brazil, the second semester brings together the biggest promotional dates as Father's Day, Children's Day, Black Friday and Christmas. In the first semester, only Mother's Day. With only this date in the first half, sales are traditionally lower in this period. In order to bring about a new momentum in sales, we've launched Consumer's Day Brazil in 2014, based on Consumer's day created by the UN in 1962. The goal of the 2017 campaign was to boost sales on the date, turning it into the Black Friday of the first half, and reinforcing the buying experience provided by Buscapé, which has everything from the best retail products, at the best price, to the possibility purchase of a complete trip, through the recently launched "Buscape Travels".

The strategy was to match multi-media communication into a cross performance action by unifying traditional offline media, online media, influence marketing and live event. The creative line had the challenge of making people feel represented by the campaign, and as a consequence, relying on the promotional date offerings. We invited the multi faceted comedian Oscar Filho as leader of the action, which used about 15 characters to give life to the different types of Brazilian consumers in TV movies, posts in social networks and acting as hosting the first Live of Consumer's Day Brazil, which happened on Facebook and YouTube of Buscape. Through a robust planning based on Social Data Intelligence*, we've identified clusters of the most searched categories in the Buscape with regard to travel (which was the motto of the action of pre-ConsumerDay), and we set up an influence marketing strategy considering three levels of influence: Influencers Blockbusters, Micro-Influencers and Brand Lovers. We recruited the famous creator Mauro Nakada, well-known by traveling the Wonders of the World and discovering exotic curiosities of the places; Andre Pilli, famous by exploiting cinematic technology in travel around the world; and Tati Romano, of the Panelaterapia channel, which explores the flavors of the world in gastronomy videos. We've created a promotion that dealt with a kit created by each of the influencers: cultural kit with trip to Machu Picchu, Peru; gastronomic kit with trip to Buenos Aires, Argentina; and adventure kit with trip to Bonito, Brazil; in which the winners would be revealed at the live event. All kits had products that could be used for travel or related themes. The Micro Influencers, the Brand Lovers and Oscar Filho played the role of promoting the promotion and preparing the audience for the event live. The exclusive content created in video used storytelling techniques to insert Buscape naturally into the narrated adventure, showing the concept of shopping experience provided by the platform. The creators used the service or spoke subtly about Buscape in a well-planned context, giving truthfulness and naturalness in the story told.
Buscape official channels, the artist's and the digital influencers' on Youtube, Facebook, Twitter, Instagram and Stories were used to reinforce teaser content of the promotional date and to promote the exclusive video content created by the creators, which contained links parameterized to the Landing Page of the promotion. On socials we've defined a voice tone to provoke relevant interaction with users and brands. In order to promote the action, we've explored on FB diverse memes and unusual posts, besides the promotion of all the inventory of FB products, such as Events, Videos, GIFs, Photos, Carousel, Post 360, PPL, DPA, R&F, Canvas and Instagram Stories for mobile and desktop.
In the offline universe, TV commercials with Oscar Filho showed the various faces of the Brazilian consumer and prepared the audience for the event live on Social Networks. Daily reinforcements in the country's top radios also reminded consumers of such a date.

The live event featured a television structure with over 14 hours of programming, and was packed with a host of activities that made youtubers famous in their channels, as well as the participation of micro-influencers and selected brandlovers. Oscar Filho embodied 8 characters so as to present first-hand offers and promote the team of social customer service that was doing curation of offers in real time via interactions in social networks. The multi-platform strategy culminated in a record sales that beat Buscape's Black Friday the previous year. 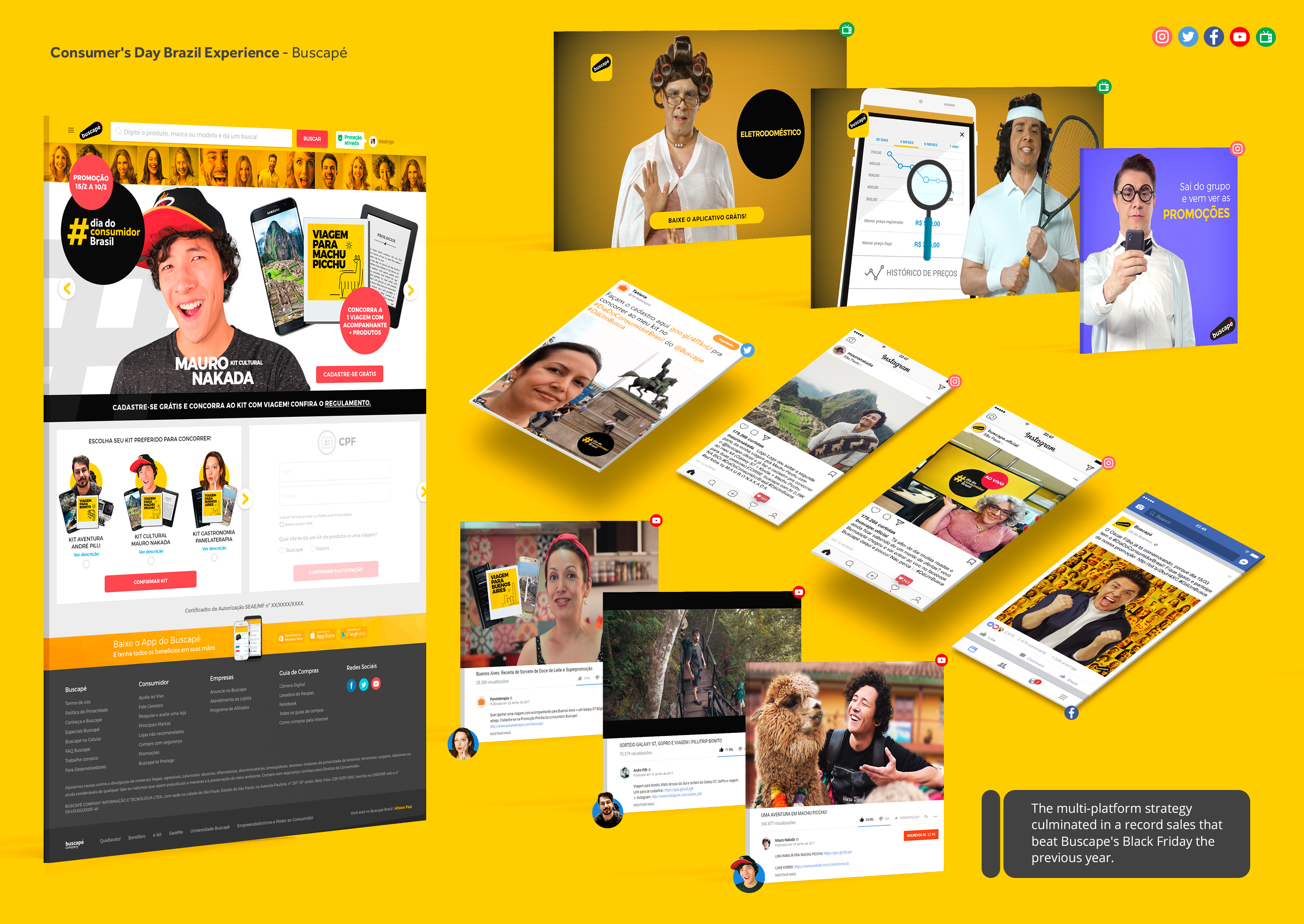 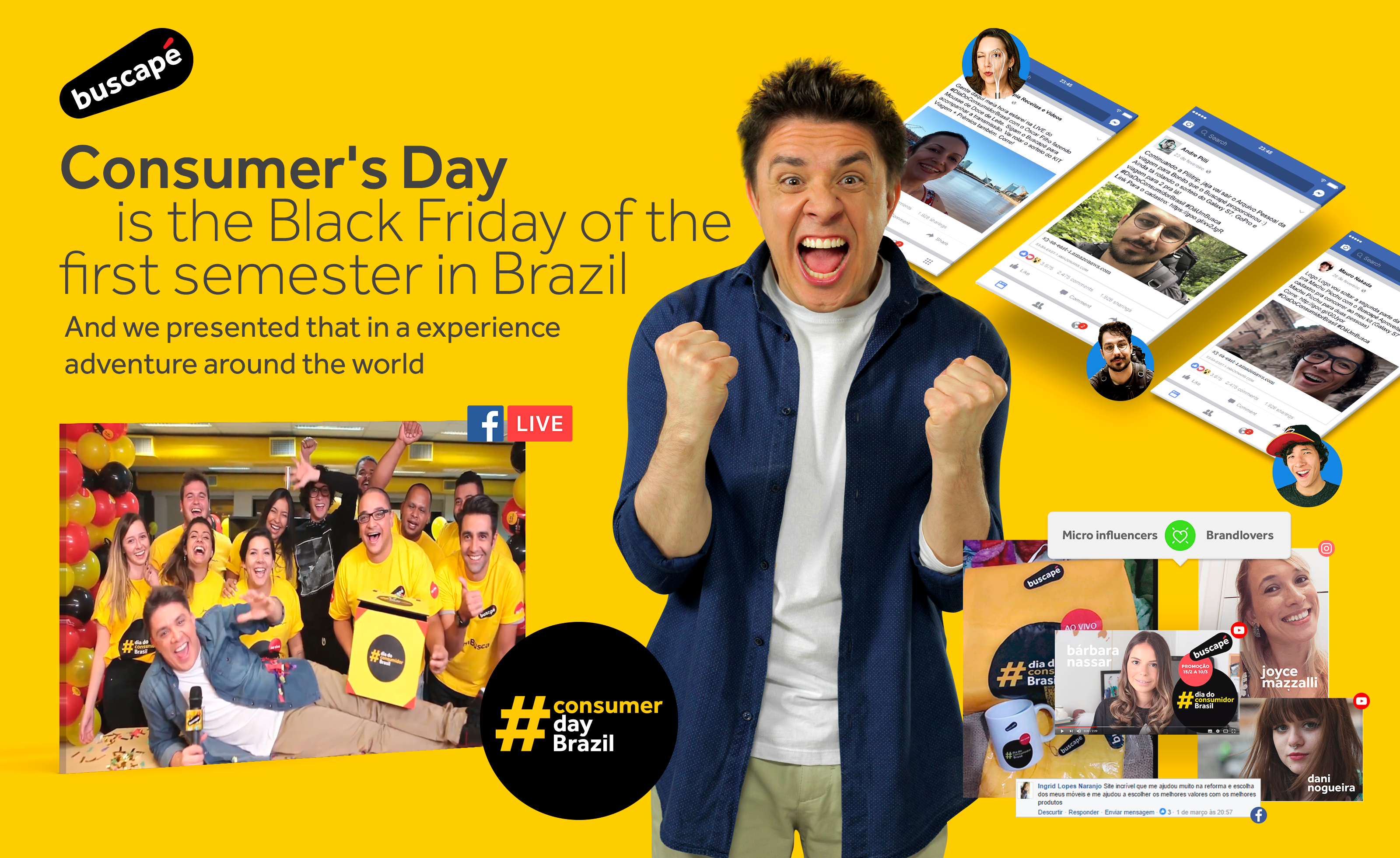 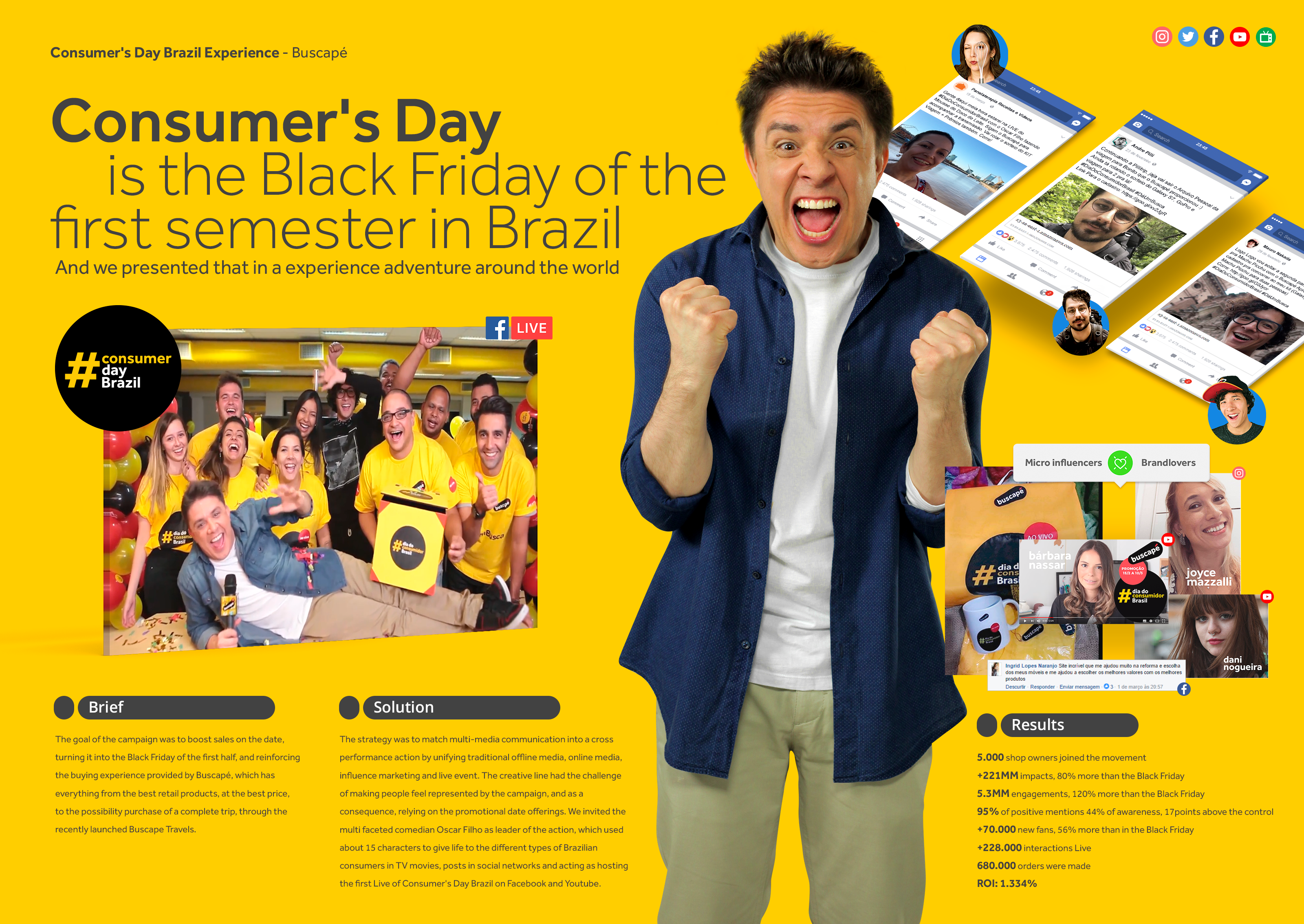