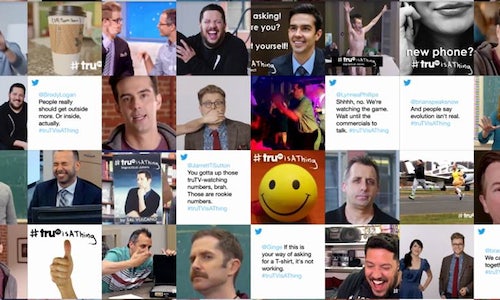 Every March, sports fans search for one of 4 networks carrying NCAA Men's Basketball first round tournament games (including truTV), then take to Twitter complaining about truTV's perceived obscurity and irrelevance. Not willing to be a Twitter target, truTV jumped into these live threads with humor and a self-aware campaign, seeking to co-opt these conversations and talk back to the trolls.

We seized the conversation from the haters, complainers, trolls and the clueless. We knew some folks on Twitter were waiting to see what we would do this year, so we went beyond explaining our existence (prior year's #HaveUFoundtruTV), it was now time to Clap Back. With our rebrand and with more comedy than any other network – we took a bolder attitude in both hashtag and creative messaging - (#truTVisAThing) and this drove the core idea:

We're not going to let your snark or sniping go unchallenged – we're here, you should know it, in fact we're already a thing1.

Focus on overall brand voice: approach the conversation in a purposefully self-deprecating and self-aware manner. Talk back like humans, not like a corporate brand.

Creative Integration: bring the talent and shows organically into the conversation. We made a conscious choice to anchor all brand conversations using our talent, while always focused on the immediate conversational imperative – What and Where is truTV?

Build direct engagement at scale: call and respond with an expanded social war room. Our goal - pump out the volume with tens of thousands of real-time conversations.

A war room of +30 folks used +800 creative units, crafting customized responses and relying on continuous optimization to deploy the most impactful. Over 7 days, we responded to +28,200 unique Twitter authors, blowing away past benchmarks for real-time engagement. We designed for mobile, since the vast majority engages via mobile (+96%). This year's campaign drew upon a full palette of potential responses, with each group of creative units designed for specific Twitter channels.

We set out to be seen, heard, and appreciated. And we accomplished just that. We redirected conversations about our March Madness schedule of games into an opportunity to showcase our comedy content and raise our brand perceptions.