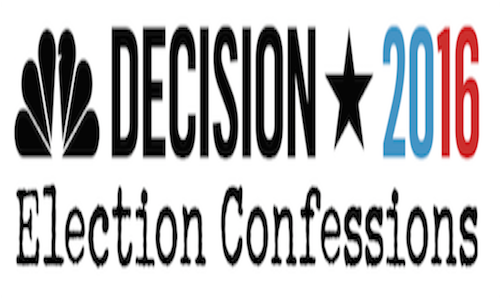 Tell us what you really think. What are your thoughts on the presidential candidates? How do you feel about the election and the state of our country?

Throughout the 2016 campaign, NBC has asked Americans to share their innermost thoughts anonymously—in numerous formats, across many mediums—on an election that people have very strong opinions about, but may not want to share with their name attached to it.

"Election Confessions" began an experiment on an Instagram account, and grew into a multimedia, multi-platform experience across the many arms of a global news network. NBC started by soliciting "confessions" ("I work in finance and love Bernie Sanders;" "I only vote so I can post a selfie;" "My husband of 28 years informed me 'A vote for Hillary is grounds for divorce.' I replied 'File the paperwork.'") in bars across New York City; people wrote them out on Post-It notes and we posted them to Instagram. Then, armed with these first examples, we built a platform that maintained the personalized, low-fi feel of these first confessions, but allowed us to reach across the country.

We invited users to send photos, videos, texts and even participate in an on-the-ground physical option at the conventions and other political arenas. We then curated all of these and shared the best on electionconfesssions.com. We also shared the most notable with our on-air producers to be included in various politics packages on TV.

NBC brought "Election Confessions" to life at both the Republican National Convention and Democratic National Convention in July. There, we had a "confessional" experience with mock voting booths, where people could come in and write down their confessions about the election and physically fold it up and stuff it in a ballot box. We had multiple voting booth locations at both conventions, from inside the media spaces to the streets of Cleveland and Philly.

Prior to the conventions, "Election Confessions" tested out a physical confessional experience at Politicon—think: ComicCon for political nerds.

"Election Confessions" leveraged multiple technologies, old and new, to bring forward the hidden political thoughts of tens of thousands of Americans—secret Donald Trump supporters, secret Hillary Clinton supporters, people who claim to vote but have never done so, even boyfriends, girlfriends, husbands and wives contemplating break-ups over their significant others' politics--and shed light on a previously hidden aspect of the American body politic to tell a, sure, non-scientific, but human, complex, nuanced story about one of the most contentious elections in recent memory.

Since February, people have called, texted, and sent photos to (424)-353-2016; their voicemails, messages, and photos are curated at electionconfessions.com. These submissions have been featured in stories on NBCNews.com, MSNBC.com, TODAY.com (among notable online publications, such as The New Yorker, Mashable, Salon, Mediaite, AdWeek, Bustle, and The Huffington Post). They have also been shared across our numerous social channels, and have been featured on old-school TV, including the "TODAY Show," MSNBC dayside and primetime, "Meet the Press," C-SPAN, and "The View." (Chelsea Handler herself read some of her favorite Election Confessions on live TV)

We did this by:

In total, we saw more than 250,000 submissions over the election period. 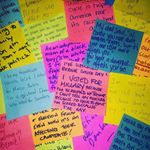 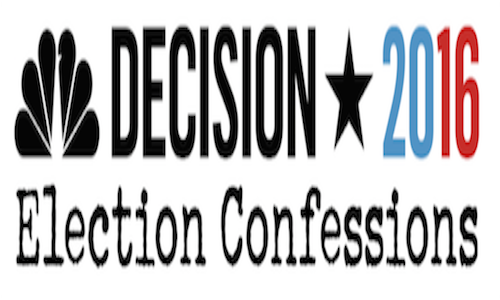