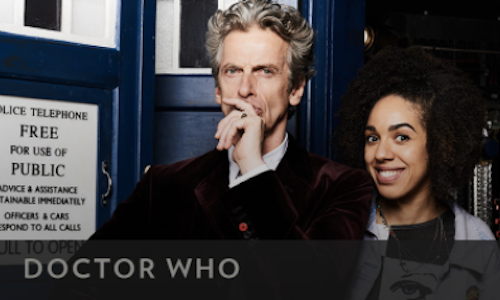 The real stars of Doctor Who are Whovians– the fans of the show who always surprise and inspire us with their endless creativity, love for the show, and love for each other. Whovians make their presence known on social― they are creators and curators. Friendships, relationships, and culture are the product of the fandom's devotion to the show. For these reasons, Doctor Who is a show without an off-season.

Our objective in 2016 was to honor Doctor Who's amazing fans. To keep Whovians engaged and thriving, we aimed to present exclusive or "first" content, create amazing social experiences, participation campaigns that engaged fans, and celebrate our fans by reflecting the audience and their work back to themselves. 2016 was about traveling further than ever before through the Doctor Who universe to give fans a new perspective despite no new season, creating an immersive social experience.

Honoring our incredible fans and connecting them with talent and each other was at the core of our strategy. This year we aimed to maintain fan engagement and grow our audience despite a year-long hiatus.

We focused on publishing compelling content and facilitating participation campaigns that kept Whovians engaged, and piqued curiosity for what's ahead in Season 10. We grew audience on Instagram and Snapchat, reaching new fans with content that resonated.

We built excitement and intrigue around the reveal of the new companion, Bill, played by Pearl Mackie. We announced the new companion through a social teaser campaign, which garnered momentum through a series of 'alert' posts, and clues about Pearl's character before making the big reveal.

We welcomed Whovians into a new era for Doctor Who, by releasing the first footage from the new season globally, in advance of the Christmas Special. To engage Whovians, attract new fans, and drive tune-in, we eventized the premiere, through all-day fan interaction and live social coverage.

We created new experiences and innovative participation campaigns through emerging platforms. For the first time ever, we created behind-the-scenes Instagram stories from production and developed an interactive Snapchat event grounded in Doctor Who culture. These well-received campaigns served to bolster ongoing conversation, provide interaction, and grant access to talent and production from an entirely new perspective.

Celebrating our fans meant diving deep into the Doctor Who universe and culture, celebrating traditions, and crafting new ones together. We supported and amplified notable fan work and cosplays, eventized beloved Doctor Who holidays and traditions (such as Wholloween), and engaged in social tentpoles, including #NationalSuperheroDay and #NationalBowtieDay.

In 2016, fan growth and conversation volume were at a historical high since the 2011 launch of the show's handles, unaffected by the hiatus.

Despite a year-long hiatus, with only one episode airing on Christmas, Doctor Who handles performed far better than other programs, as compared to ListenFirst's Top 140 Networks benchmark.

The Return Of Doctor Mysterio was ranked the #1 most social program on Christmas night across Facebook and Twitter (according to Nielsen Social), remaining #1 for a second year. It garnered 109K post interactions from 83K unique profiles, and trended in 77 cities worldwide. 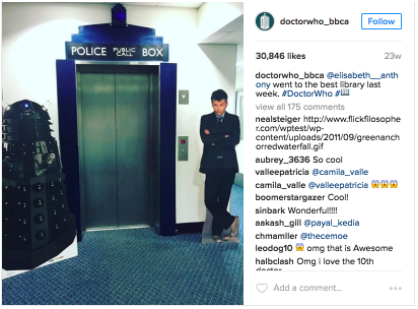 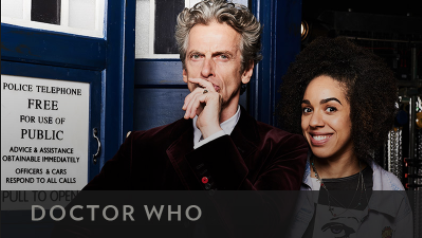 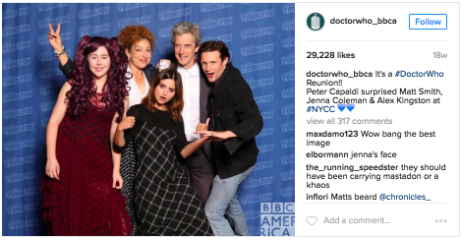 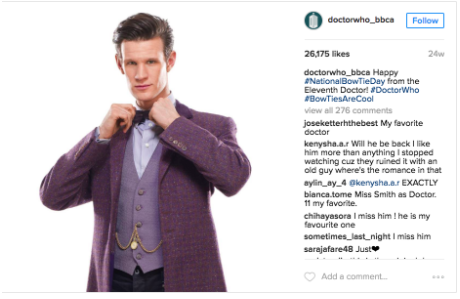 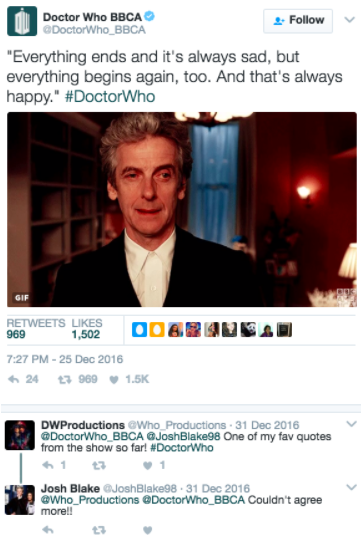