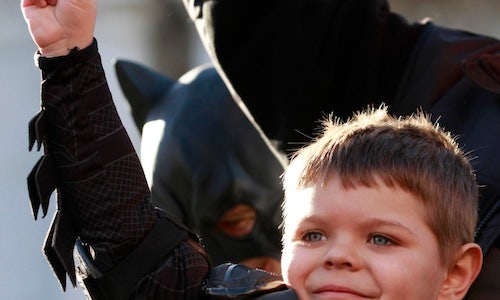 On Friday, November 15, 2013, five-year-old cancer fighter Miles, aka #SFBatKid, got his wish to become a superhero with the help of Greater Bay Area Make-A-Wish Foundation and a social media campaign created by Clever Girls Collective. San Francisco was transformed into Gotham, complete with bat signal and Police Chief Greg Suhr's plea for help. Miles, in full Batgear, and a grown-up Batman rescued a damsel tied to cable car tracks, stopped the Riddler's bank robbery, paused to eat a burger, then thwarted the Penguin's attempt to kidnap beloved SF Giants mascot, Lou Seal. To cap the day, Mayor Lee presented Miles with a key to the city. Tens of thousands of supporters lined the streets to cheer for Miles. And online? Those ranks swelled to hundreds of thousands. Well-wishers including President and First Lady Obama; famous Batman actors Val Kilmer, Christian Bale, and Ben Affleck; other celebrities including Britney Spears and Enrique Iglesias; sports teams including the San Francisco Giants, the San Francisco 49ers, and the Golden State Warriors; and even an astronaut at the International Space Station. They sent their encouragement via tweets, Instagram photos, and Facebook updates—and the president notably congratulated Miles via his first ever Vine video, saying: "Way to go, Miles. Way to save Gotham!" Thanks to social media, "regular" people also added their voices to the chorus of support for Miles, and created an electronic outpouring of emotion that generated an estimated 1.7 billion social impressions. On November 3, roughly two weeks before Miles' big day, Clever Girls Collective founder Stefania Pomponi contacted the San Francisco chapter of Make-A-Wish after reading a blurb on a local blog about San Francisco being turned into Gotham for a five-year-old Batkid. She knew that with a social media push, the wish had the potential to go viral. Make-A-Wish Greater Bay Area Executive Director Patricia Wilson quickly accepted, saying she hadn't even had time to issue a press release about the event. Within 24 hours, Clever Girls Collective created the social media plan and began coordinating with partners like Twitter, Livefyre, and Simply Measured, which monitored all of the social media activity. Within 48 hours, Twitter secured the @SFWish and @PenguinSF Twitter handles, and on Friday, Nov. 8, just five days after Clever Girls Collective first contacted Make-A-Wish — and exactly one week before the big event — the social media plan was launched and pre-promotion began. Clever Girls works with big brands every day that want "something viral." Although you can't force virality, a great story and authentic engagement can help it happen. People respond to significant stories via social media, whether you want them to or not, and whether you participate or not. Goal one is a story worth telling. The second goal is to do everything possible to steer the conversation and make it easy for people to contribute to your narrative. Batkid is pretty much the greatest story ever, so that was easy. We knew the real work was steering activity. We focused on setting the social media stage so that the story — which deserved to go viral — actually could. Step 1: Social Media 101 set-up We made information easy to find and understand, including a Facebook page, and detailed blog post distributed through a single URL. We used the official @SFWish Twitter handle for real-time information and the @PenguinSF "villain" to amplify the narrative. Most importantly, we established #SFBatKid as the official hashtag, and set up Simply Measured social media listening tools to monitor and measure activity. Event organizers were involved from the get-go and everyone was enthusiastic about what would happen, how, and when. Step 2. The script Much "day of" activity was unscripted and off-the-cuff, but the entire scope of social media support was planned well in advance. Using Batkid's itinerary, we wrote a Twitter script identifying key points, photos, and videos to include, and when. Step 3. Staffing We had a dozen people on-point, starting at 6 a.m. One team traveled with Miles, reporting and photographing goings-on, and supporting Tweets from @SFWish, including the photo retweeted by President Obama. A second team pushed scripted Tweets to the #SFBatKid hashtag. Dedicated staff watched news feeds and Tweet streams to stay on top of the story as others were telling it, adjusting ours as needed, and responding to the many high profile tweeters. Hugely important? Every member of the Clever Girls team was empowered — and encouraged! — to engage. A successful social campaign requires authentic, in-the-moment interactions to resonate with people and bring the story to life. Step 4. Measure the impact From November 5 until about 5:00 PM on Saturday, November 16, Clever Girls Collective has tracked over 500,000 individual tweets using the official #SFBatKid and the unofficial #batkid hashtags, generating over 1.7 billion impressions.

Read more about the social media campaign behind #SFBatKid in Fast Company, Mashable, and Digiday. 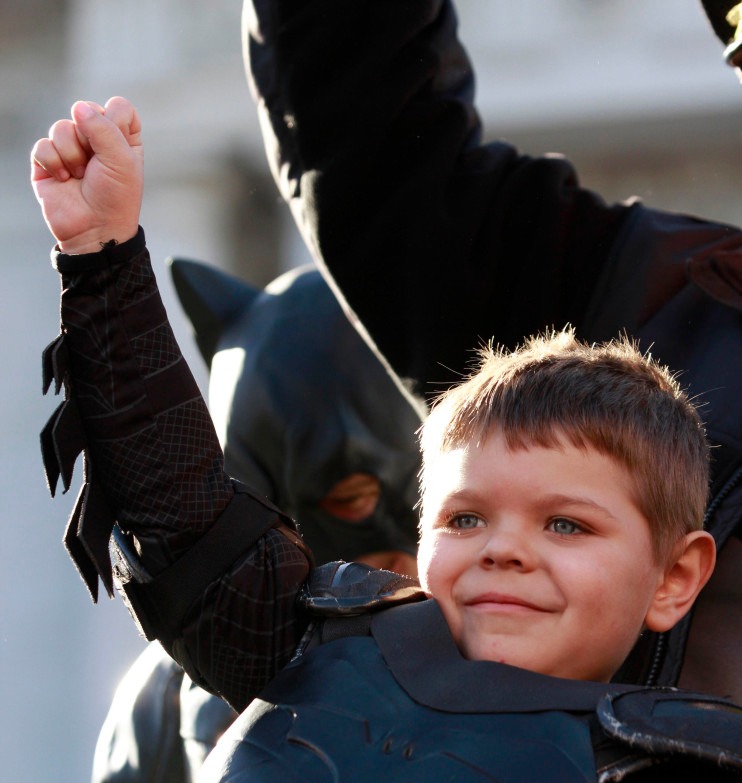