On Tuesday, April 16, the Federal Aviation Administration (FAA) advised Airlines for America (A4A) and carriers that furloughs of air traffic controllers would begin that following Sunday. Carriers were told to plan for imminent, widespread delays on a scale the industry had never seen. The “Don’t Ground America" campaign sought to achieve one sole objective, to stop unnecessary flight delays resulting from air traffic controller furloughs. Within 10 days of the FAA’s briefing, the airline industry secured congressional passage of bipartisan legislation that took the unprecedented step of eliminating the impact of the FY'2013 sequester on a specific industry. Strategy A4A responded immediately to approach the problem from all angles, alerting Capitol Hill and the media to the coming crisis via social media and traditional means, garnering a coalition of unified support from the following major associations: Air Line Pilots Association, Regional Airline Association, Consumer Travel Alliance, International Association of Machinists & Aerospace Workers and Professional Airline Flight Control Association – United States. A4A Communications held a National Press Club press conference (see embedded video above), promoting the conference via A4A and member social media channels, as well as offering the conference on our YouTube page. A4A issued statements to multiple media outlets resulting in extensive coverage and social media mentions. As part of the grassroots media effort, A4A launched the “Don’t Ground America" campaign website and worked with carriers to drive customers and interested parties to engage via social media channels. During this time, A4A developed strategies for social media promotion (encouraging followers to reach out to their senators and congressional representatives and targeting our A4A members) and encouraging the flying public to sign the Don't Ground America petition. In addition, A4A created and placed several digital advertisements to coincide with the social media grassroots efforts. Tactics In addition to harming passengers, shippers, jobs and the economy, A4A made a compelling case that the pending furloughs were unnecessary, ill-conceived and potentially crippling to the air traffic control (ATC) system. Carrier outreach to employees and customers directly corresponded to website traffic spikes, and generated meaningful contacts to the Administration, the FAA and Congress. Congress responded quickly due to the unified, high-profile pressure and consistent social media attention reporting on potential or actual consumer outrage and impact. As part of its social media promotion, A4A shared statistics daily on the growing number of delays to Congress and the Administration. Execution In less than 10 days, A4A built grassroots support and social media awareness that urged the FAA to end furloughs of air traffic controllers as a result of sequestration. On Friday, April 19, A4A held a press conference made available on YouTube with ALPA and RAA and issued a social media release on the launch of the “Don’t Ground America" campaign and our lawsuit. In addition, the press conference was live-tweeted for those who were unable to watch the press conference on YouTube. Digital ads promoting the campaign ran on Politico.com beginning April 23, and social media conversations surrounding the furloughs remained intense. At that point, nearly 9,000 letters had been sent to the White House, DOT, FAA and Members of Congress from concerned members of the flying public via A4A's microsite: www.DontGroundAmerica.com. To continue interest via social media, A4A promoted news stories that garnered attention on the subject via its social media channels. On April 24, A4A SVP Communications Jean Medina appeared on NBC Nightly News to continue messaging against the furloughs on behalf of airline customers. The Wall Street Journal ran an editorial entitled, “The FAA Strikes Again, the FAA Brags," the Chicago Tribune ran the editorial, “Hostages on the tarmac!" and USA Today editorialized that “Aviation cuts are a disgrace." Southwest Airlines CEO Gary Kelly appeared on CNBC, mentioning the “Don’t Ground America" campaign on April 25 and Medina was interviewed for the Today Show. The following day, April 26, Medina appeared on Fox Business, and that evening, the U.S. House of Representatives passed a bill allowing the FAA to reallocate funds and end furloughs for air traffic controllers. During this time, A4A tweeted a recap of events from the television interviews and distributed articles with social media followers, encouraging people to comment within these news stories to share their story, as well as including their senator's Twitter handle/Facebook page when voicing their opinion. In addition, A4A relies heavily on its success via its relationships with its members, whom combined, have millions of followers. Throughout the course of the campaign, A4A submitted strategic messaging to member airlines for consideration to use on their personal social media channels. As a result, A4A members contributed in the following ways: linked to the campaign website from internal and external websites, directed employees to encourage customers to visit the campaign website, linked to the campaign website in news releases and used their social media platforms and traditional media contacts to promote the campaign. Evalution of Success/Results/ROI Ultimately success was defined by completing the target objective – to stop unnecessary flight delays resulting from air traffic controller furloughs – in just a matter of days. The number one priority was to mitigate and prevent negative impacts to airline customers. Through group effort, A4A and its member airlines were able to claim success in this endeavor on behalf of the customer and the U.S. economy. The campaign resulted in nearly 21,000 people writing letters which resulting in 124,728 letters sent to the White House, Department of Transportation, FAA and Congress via DontGroundAmerica.com. As a result of A4A's promotion, there were more than 400 online articles regarding the furloughs, resulting in 107 million online impressions. Online advertising garnered nearly 2 million impressions with nearly 10,000 click-throughs from online advertising. Social media efforts resulted in nearly one million Twitter impressions from @airlinesdotorg and a Facebook reach of nearly 250,000 from A4A's National Airline Policy Facebook page, with more than 1,000 shares, nearly 3,000 likes and nearly 1,000 comments. 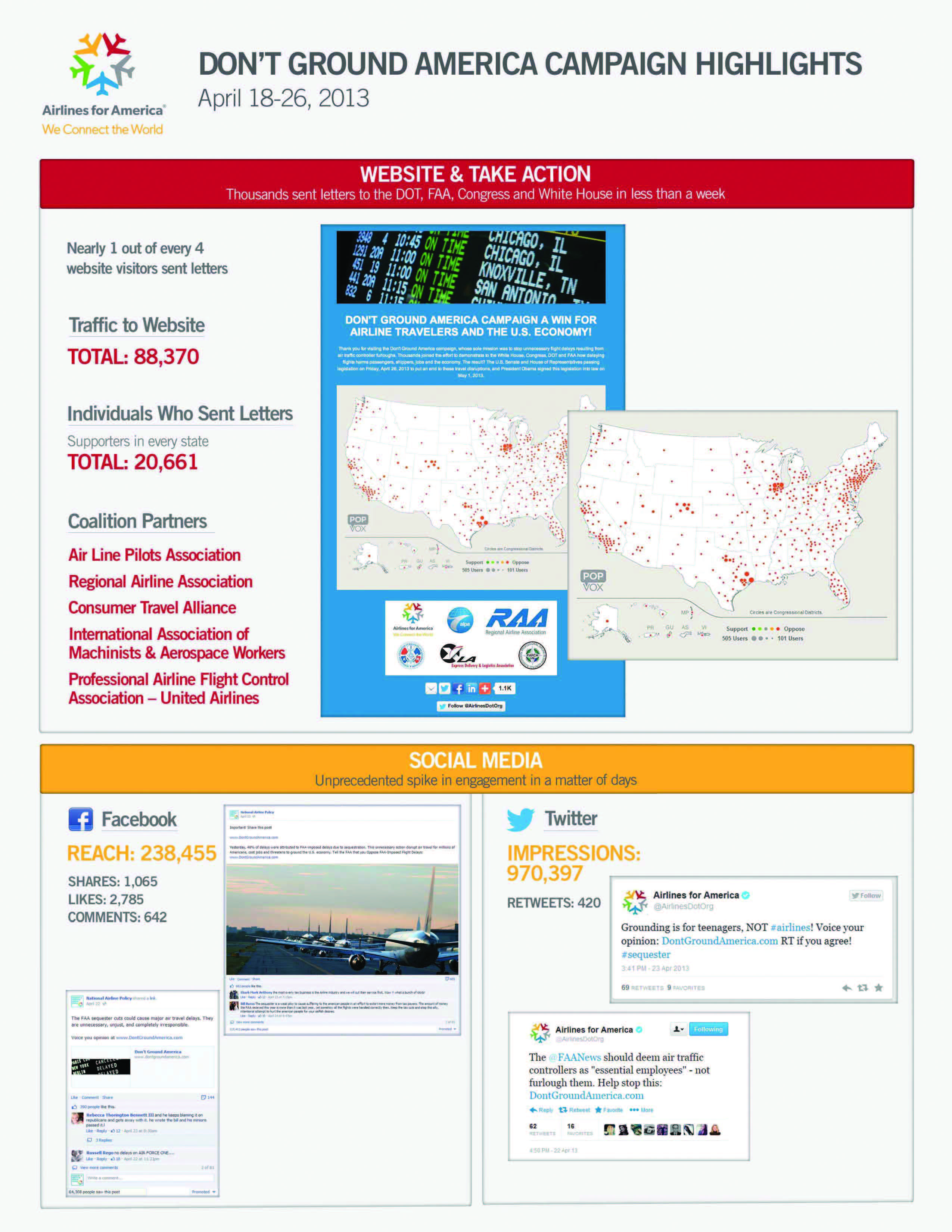