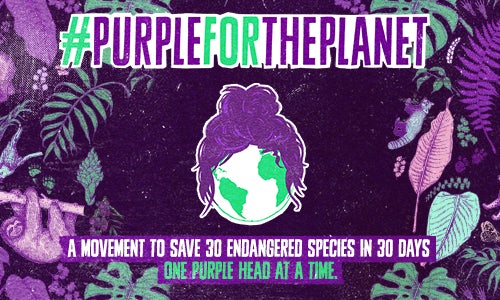 Sambazon has been fighting to protect the rainforest for almost two decades. As a brand that was founded on a commitment to social and environmental consciousness, the industry pioneer and market leader in the organic açaí category has been actively at the forefront of environmental protectionism in the Amazon since the beginning. Even the name, Sambazon, is an acronym for "Sustainable Management of the Brazilian Amazon".

So when the Sambazon team learned that scientists estimate one species is forever lost to extinction for every 584 acres of rainforest that are cut down, they decided to step up their game. As part of their continued engagement with creative agency of record, Mistress, Sambazon saw an opportunity to not only rally behind a cause that was near and dear, but also one that sits at the core of the company's ethos: to operate as both a financially-responsible and environmentally-responsible company.

With the goal of saving 30 endangered species in 30 days, Sambazon launched #PurpleForThePlanet, a social-good campaign that harnessed user-generated content to protect biodiversity in the heart of the Amazon rainforest. The initiative tapped social, digital, and experiential channels to champion environmentalism in a unique way—by pledging to protect five acres of Amazon rainforest for every person who colored their hair purple (either digitally or IRL) and uploaded a photo to social media.

The initial goal was to garner around 3,500 purple-headed posts to ensure the protection of 30 endangered species during the timeframe.

Starting on Earth Day 2018, #PurpleForThePlanet ran the 30 days to May 22nd: World Biodiversity Day. The integrated campaign consisted of four main pushes: a social media campaign, a celebrity and influencer program, digital and web content, and an experiential activation. Harnessing user-generated content, Sambazon championed biodiversity in the heart of the Amazon rainforest, not only through awareness but through an impactful partnership with The Rainforest Trust and its "Save-an-Acre" Program.

The social-first campaign's call to action centered around the #PurpleForThePlanet hashtag, which tapped students, environmental activists, and general consumers to use social media as a tool for genuine change. Understanding modern social media culture and how an action as small as a selfie can trigger a global movement, Mistress looked to empower people to show their true colors and become part of making a greater change and tangibly impact their world. Mistress used the selfie as the cornerstone of the campaign, turning volunteers into the face of Purple for the Planet —the face of change was suddenly the face of the public. Through a combination of Instagram, Instagram Stories, Facebook and Twitter, the campaign inspired people to color their hair purple, and upload a picture online to share support for the cause.

While the organic social media engagement was substantial, it was amplified through the power of influencers and paid media. To help fuel participation, the açaí powerhouse partnered with notable celebrities such as Riverdale co-stars Madelaine Petsch and Vanessa Morgan, Queer Eye star Jonathan Van Ness, Olympic Gold Medalist in Gymnastics, Jordyn Weiber, and actress Jenna Ortega, known for her role in Jane the Virgin and a number of Disney Channel shows. Not only did Hollywood personalities lend their voices (and hair) to the cause, Sambazon tapped influencers like The Merrell Twins, Christie Ferrari, Krispy Shorts, Science.ig, and even Fuck Jerry.

To further support the social conversation around Sambazon and protecting biodiversity in the Amazonian rainforest, a video was produced to build awareness and educate volunteers about going #PurpleForThePlanet. Complemented by a landing page, digital artwork, and other assets, the video boosted the social media's resonance by providing sharable content with a clear call to action: to share a purple-hair selfie.

#PurpleForThePlanet wasn't limited to the online community. While the campaign engaged consumers on social media, it also called on the Los Angeles community to attend an experiential activation on Venice, California's famed Abbot Kinney Boulevard. The event featured hairstylists, hair coloring stations, Instagrammable backdrops, and photo booths, all to help guests go purple for the planet. This in-person branded footprint brought together people from all walks of life, to celebrate the environment and Sambazon's açaí offerings.

#PurpleForThePlanet was an overwhelming success. Surpassing the initial goal of saving 30 species in 30 days, Sambazon protected a grand total of 216 species from extinction. By securing 126,270 acres of Amazon rainforest, in just 30 days, Sambazon tapped the public to help reach its biggest achievement yet with regards to saving the rainforest and protecting biodiversity in the region.

The initial goal of 30 species was achieved less than halfway through the activation window, and in the end, #PurpleForThePlanet over-delivered by 81% above the original participation goal. Overall, the campaign inspired over six thousand volunteers to go purple and help protect hundreds of Amazon species, including animals like the endangered Giant Otter, the White-Bellied Spider Monkey, and the Jaguar. With so much engagement coming from consumers and fans, the Rainforest Trust also increased their contribution to the activation, helping the Sambazon team make an unprecedented impact on the Amazon.

#PurpleForThePlanet united thousands of people under Sambazon's banner to make a tangible difference to the world we live in. Over the course of nearly 20 years, the brand's continued commitment to the Amazon rainforest has protected 2.5 million acres total, an area larger than Puerto Rico. And it continues to lead the way in both sustainability and in the açaí market.

Video for Going #PurpleForThePlanet with Sambazon 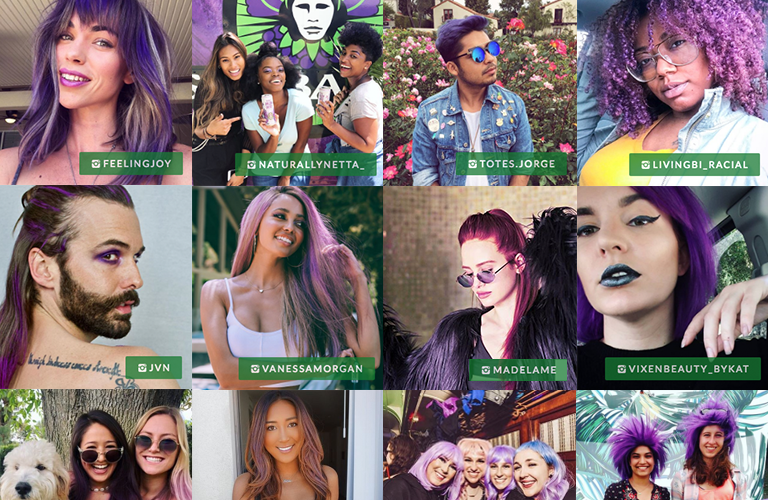 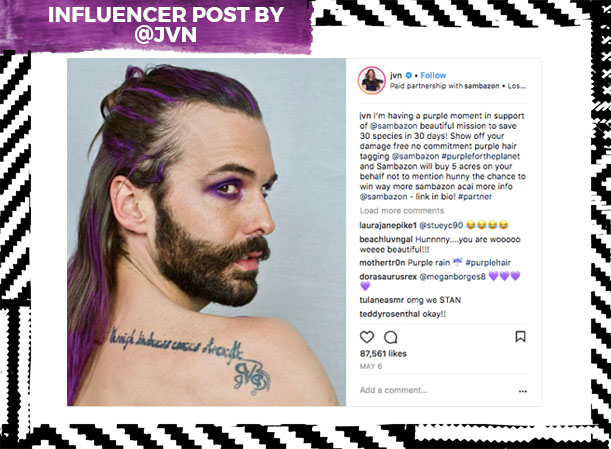 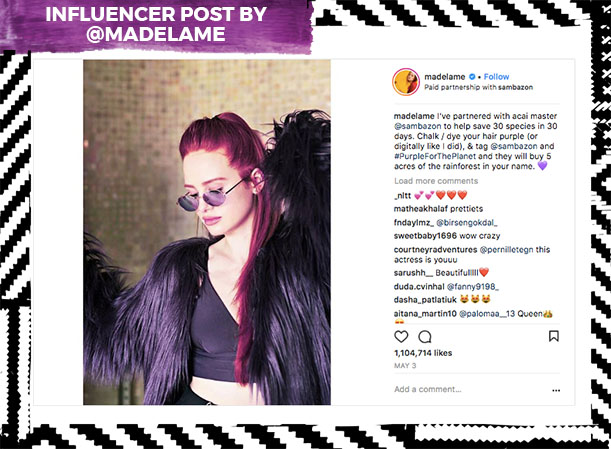 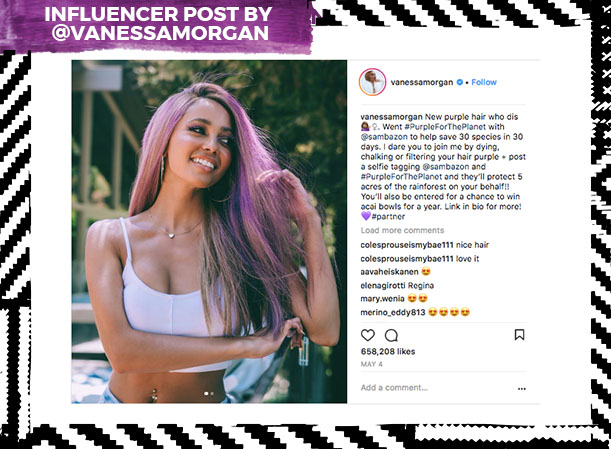 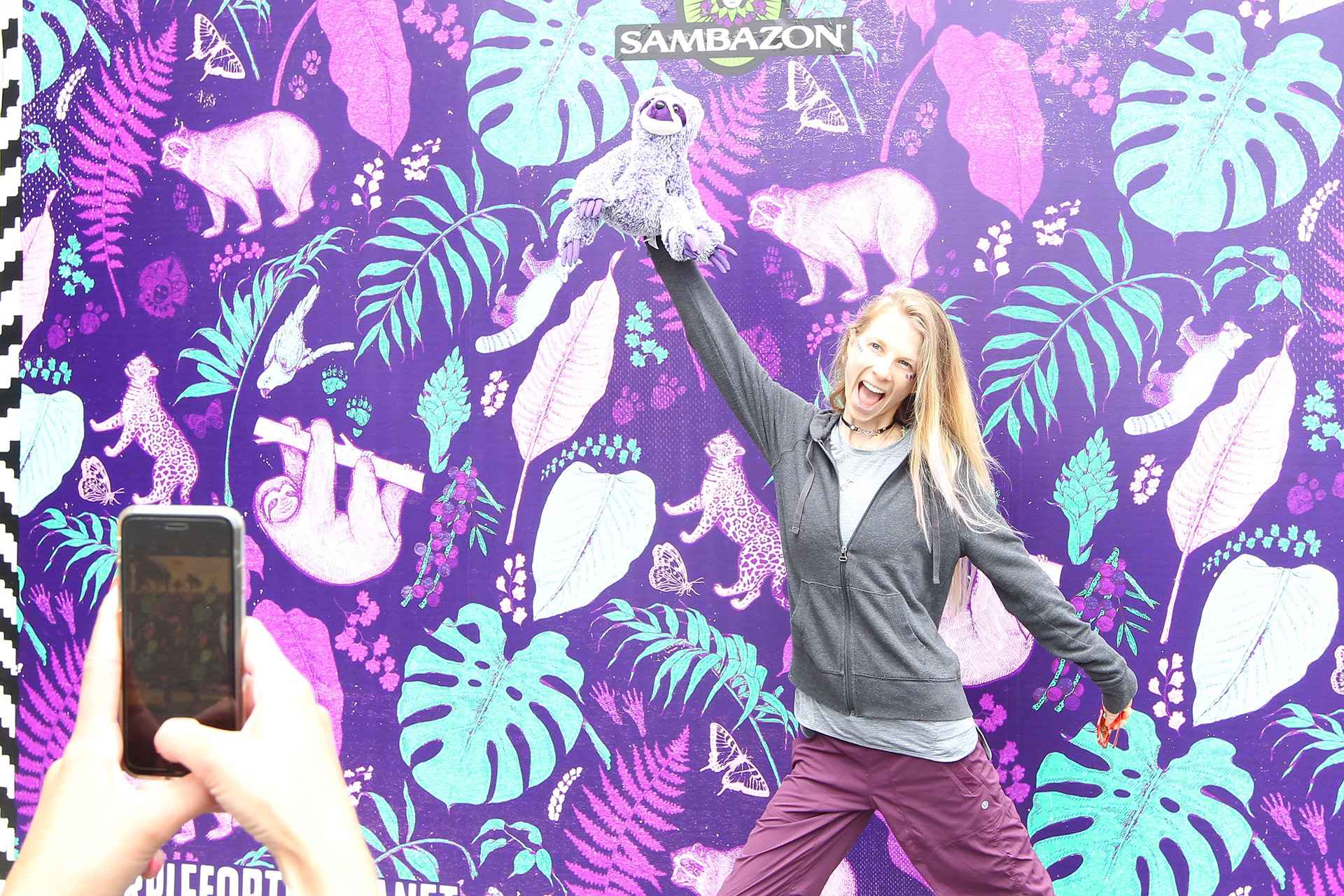 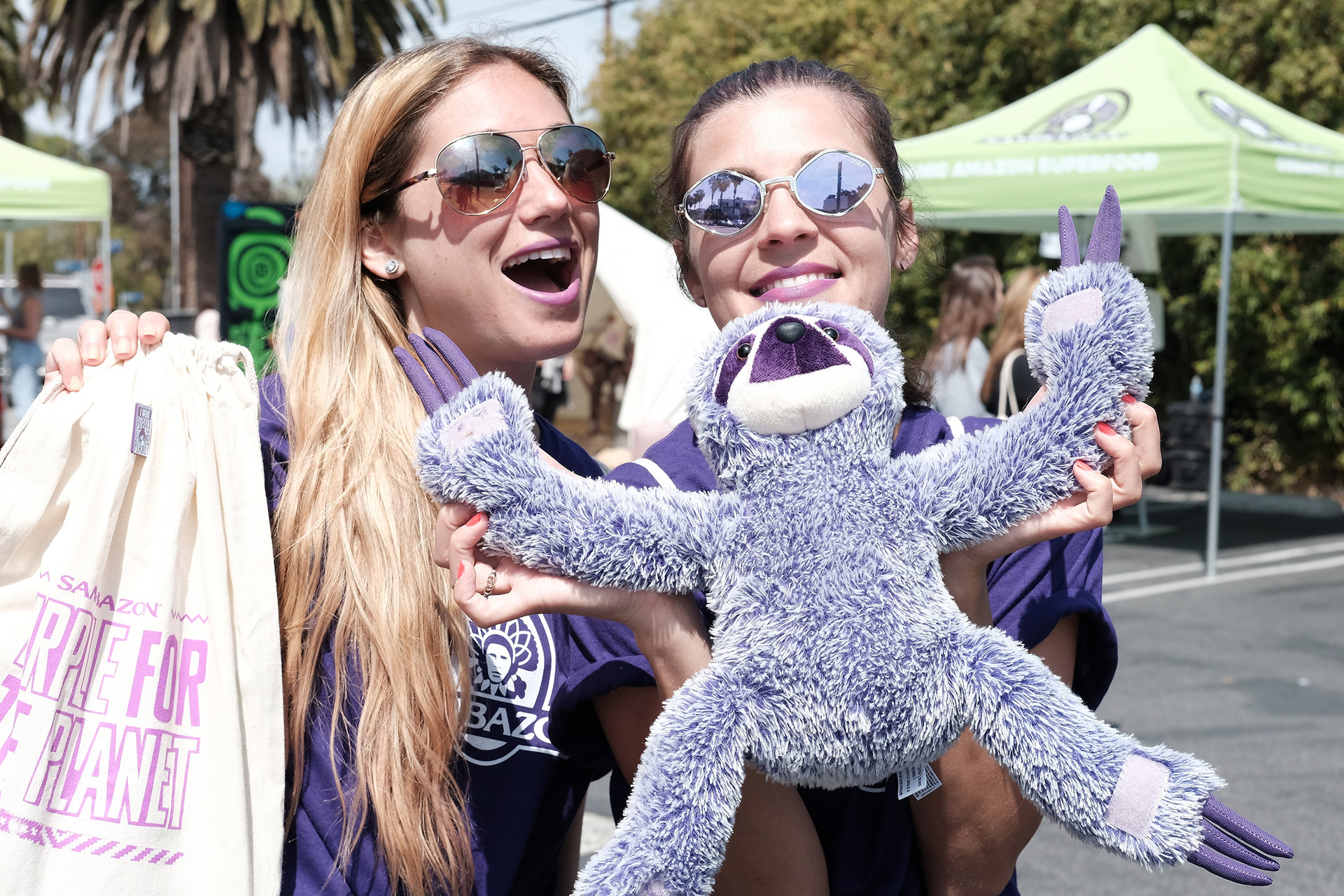 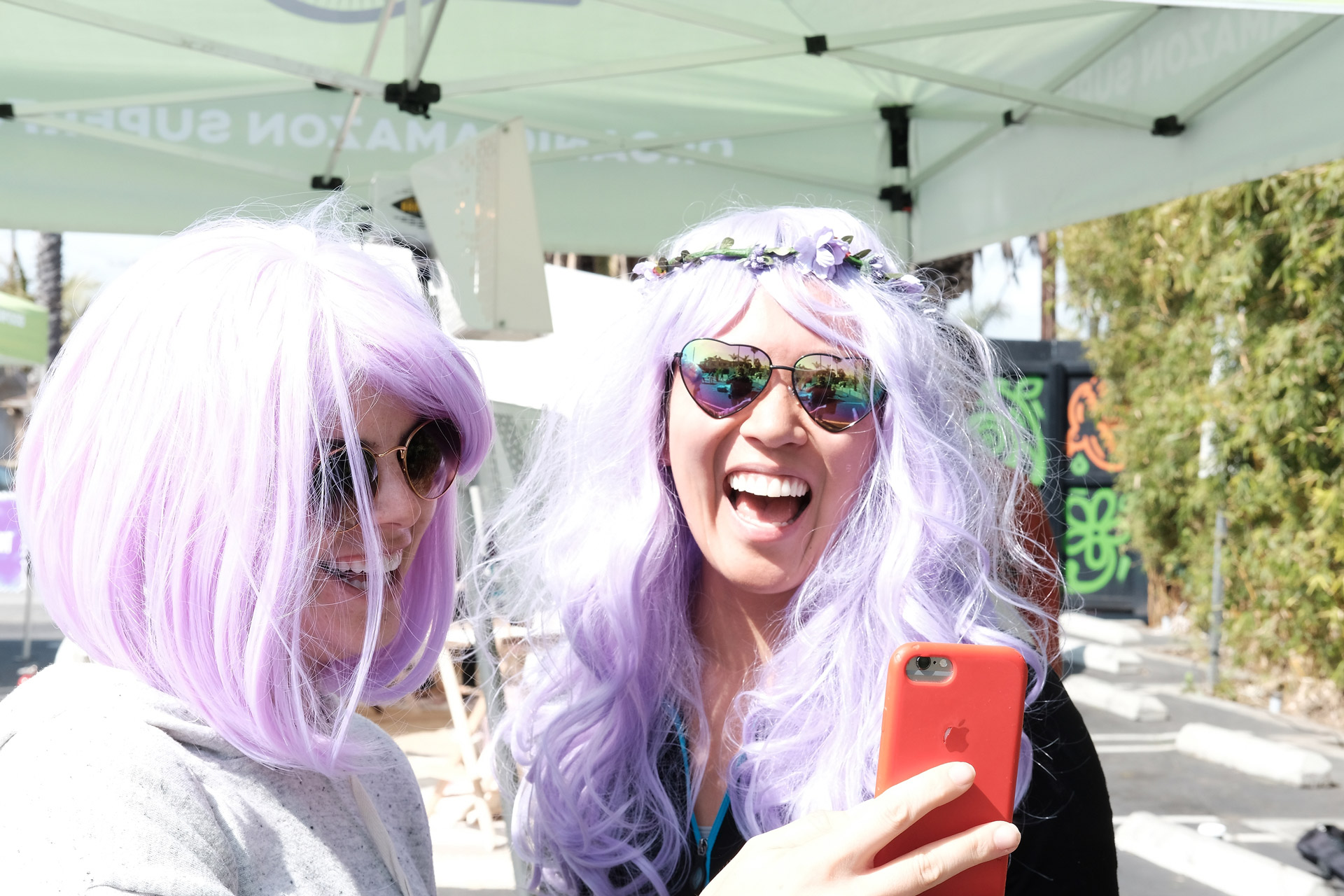 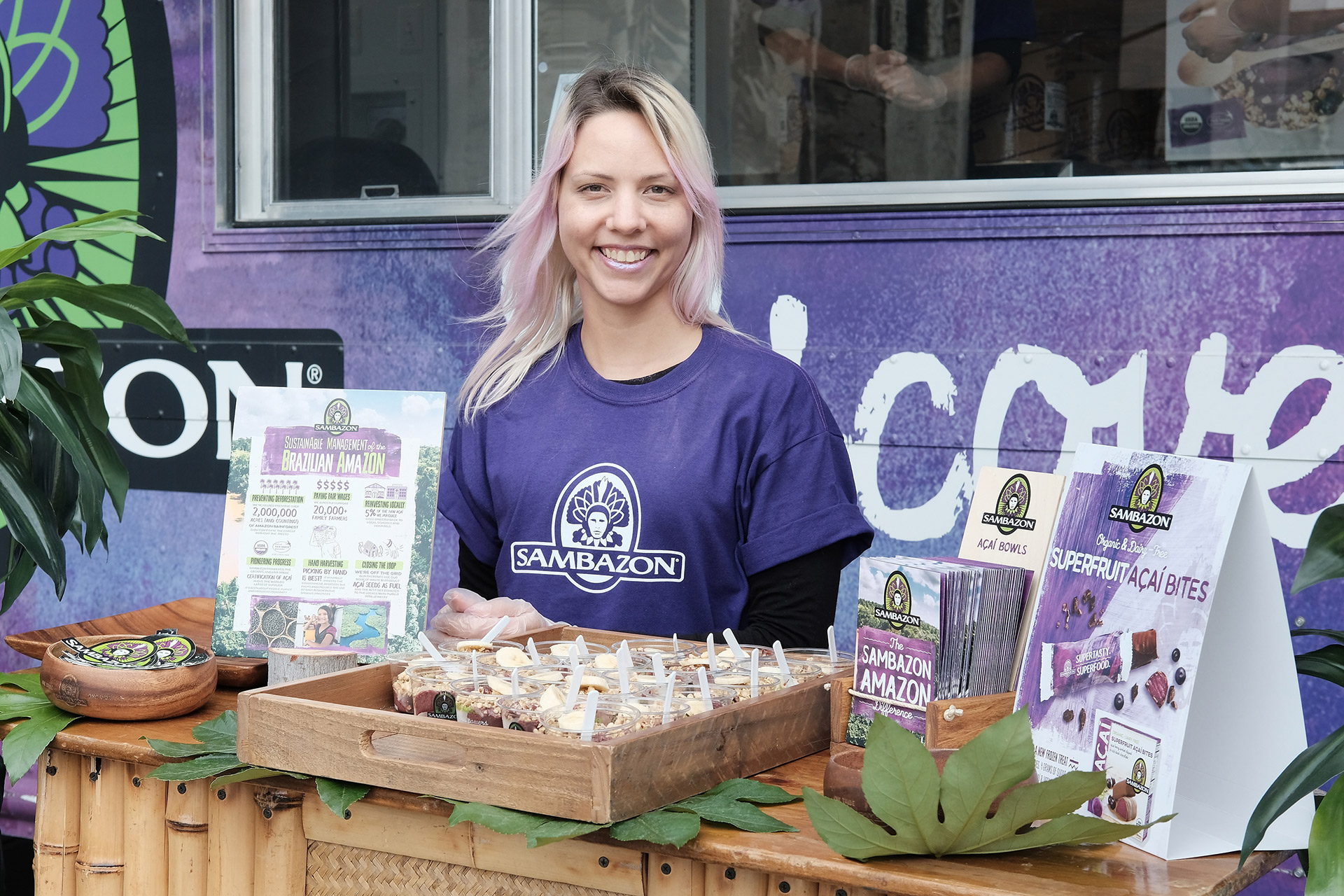 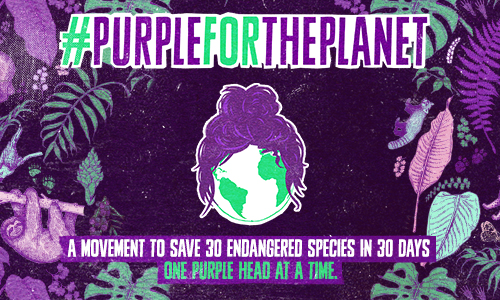 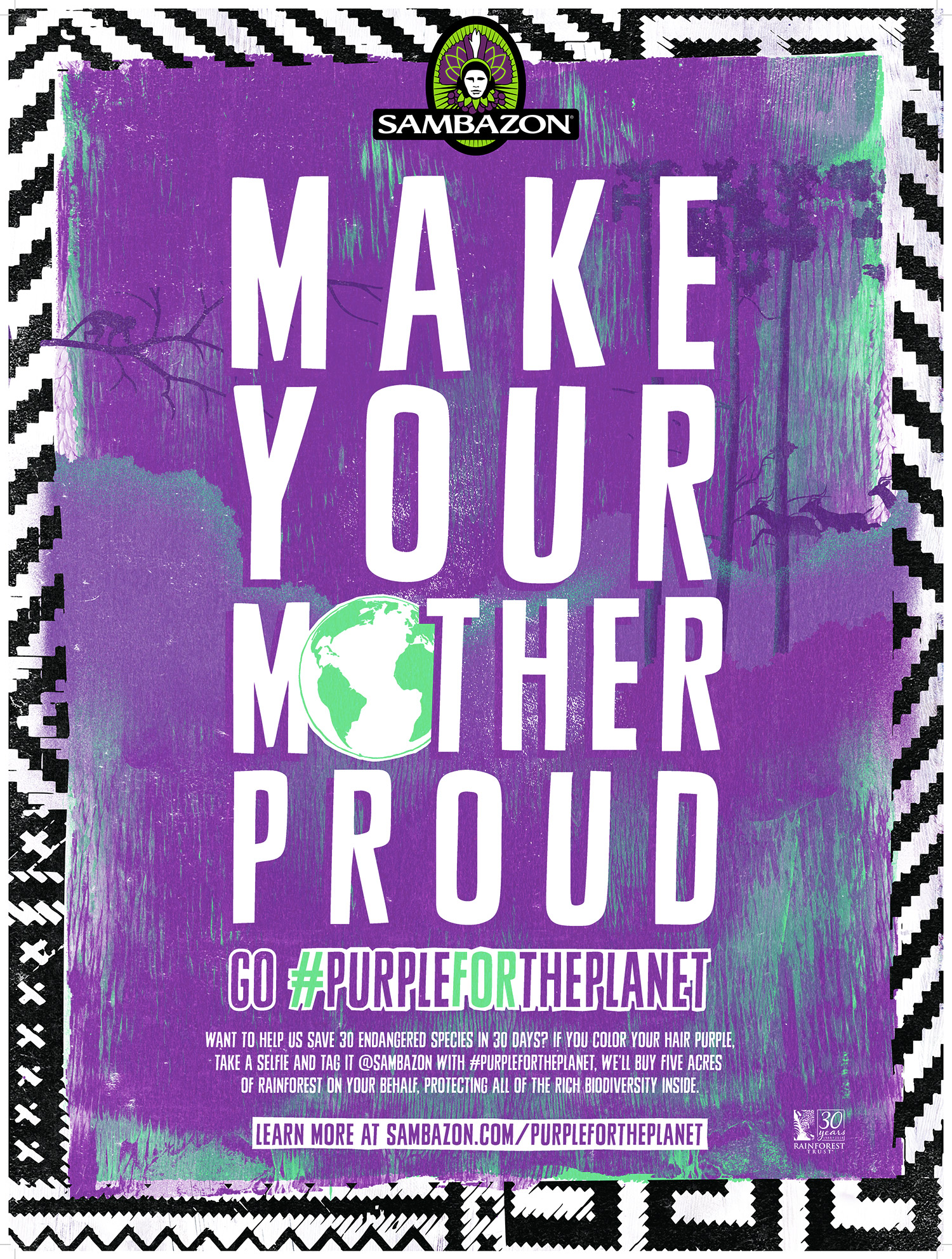 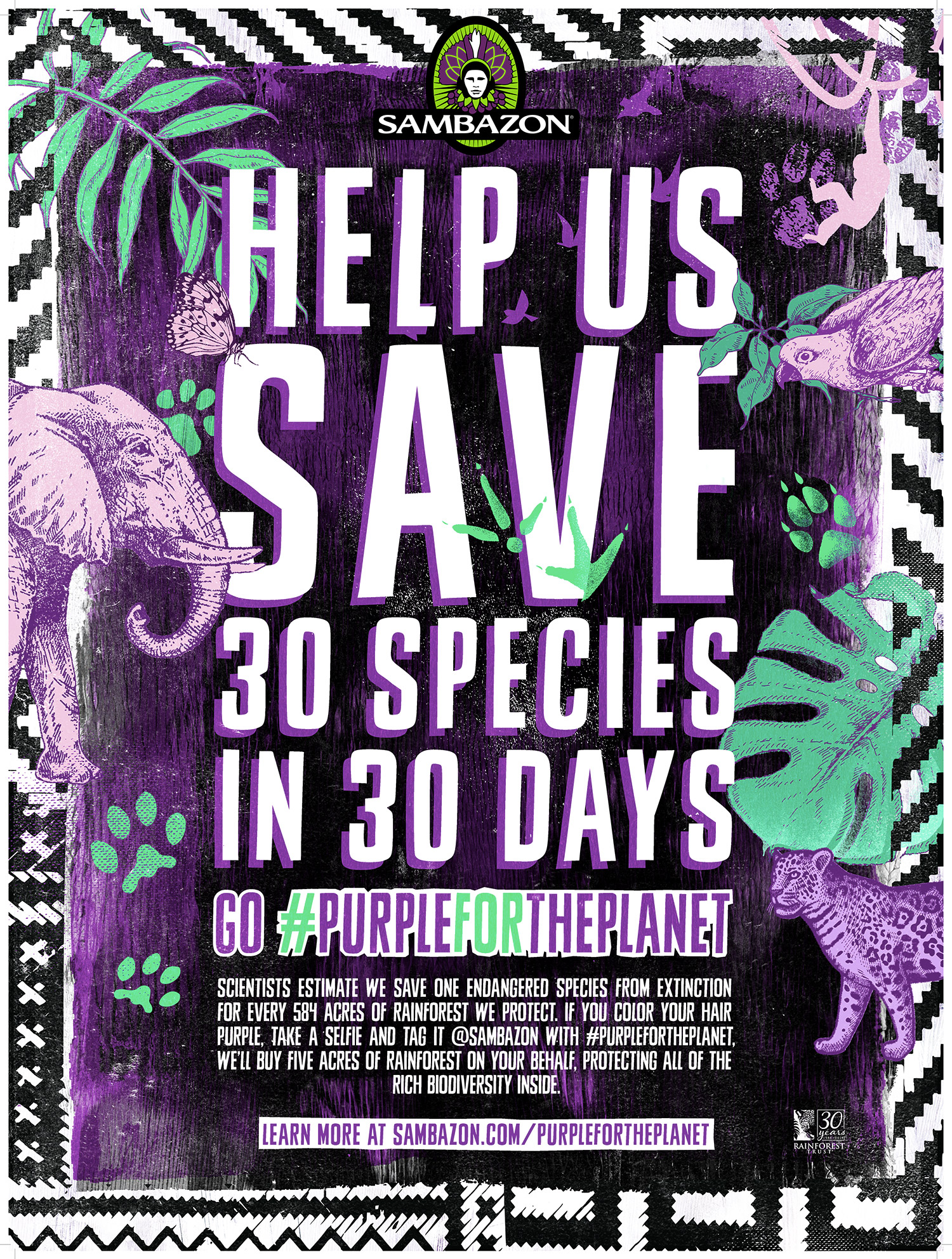 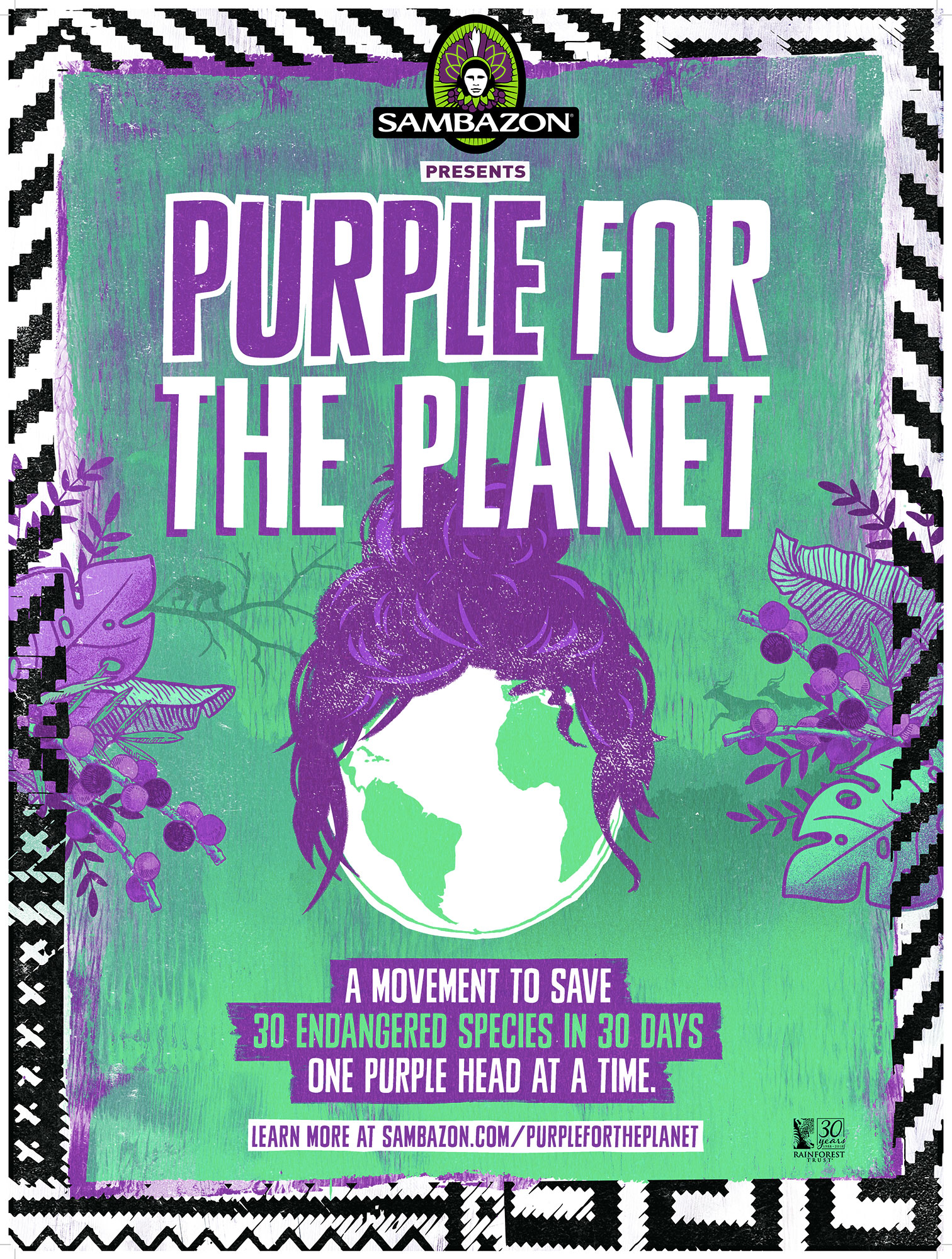 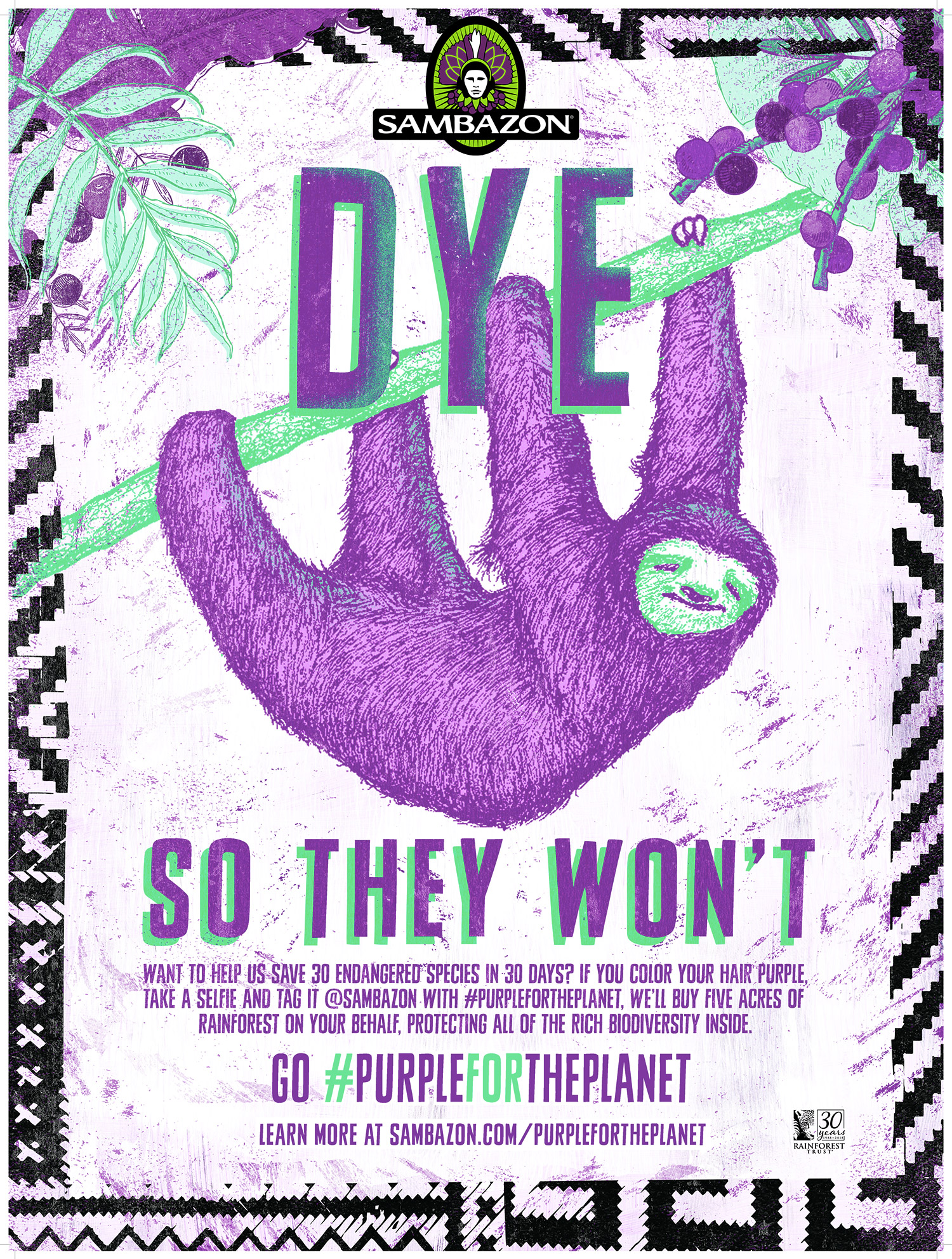