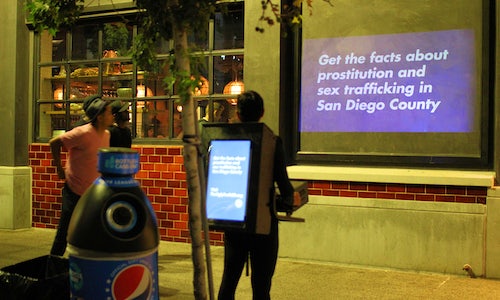 “The Ugly Truth” public awareness advertising campaign aims to shine a light on the realities of sexual exploitation, prostitution and trafficking in the U.S. by challenging commonly held perceptions about prostitution, exposing the myths, and bringing to light the cold hard facts about the problem, of which most people are unaware. We also wanted to challenge public attitudes that too often encourage us to turn a blind eye to the exploitation of women and girls in our community.  “If you’re paying for sex, you could be paying for someone’s pain.” is one example of the shuttering tagline from the creative, which hopes to change sentiments about this victimizing and damaging problem in the San Diego County.

The campaign launched in the San Diego market in partnership with the San Diego District Attorney’s Office. On any given day, over 8,100 women and girls are sexually exploited in the greater San Diego area. The vast majority entered the sex trade after fleeing abusive homes, often while still in their teens. Most will experience violence at the hands of their pimps or traffickers in a trade that has staggeringly high mortality rates: according to a comprehensive mortality study funded by the National Institutes of Health, the average age of death for a prostituted or trafficked person is a startling 34- years old. The scale of the illicit sex economy is a staggering $810 million a year with each trafficker controlling about four victims and making an average of $670,625 per year.

“The Ugly Truth” campaign grew out of a simple belief: that until the public understands the truth about the conditions that drive women and girls into the sex trade—and the violence prostituted persons are likely to encounter while working in it—we will lack the community consensus or public will that can lead to change. Media can play a critical role in creating this awareness, particularly in an era where TV, print, film and online representations of prostitution are often so glamorizing.”

CREATIVE. This is not an “old school” public service campaign. We believe that a logo + a photo does not = a good advertisement.
BOLD. We didn’t want to ignore what the public really thinks (or doesn’t) about trafficking and sexual exploitation. We wanted to call it out.
PROVOCATIVE. Our mantra was to embrace discomfort. We believe that friction can create real change (and make for great ads).
FACT-BASED. We knew from our research that a “just the facts” approach was surprisingly powerful when the facts are this compelling – and heart breaking.

This is a campaign that is unique in that it speaks to victims, buyers, exploiters and the general public in a non-judgmental, fact-driven way. In the end, our messaging was driven by understanding what San Diegans knew – or didn’t – about trafficking and sexual exploitation We realized that to really make a difference we needed to meet people “where they are.”

And we believed deeply that leveraging the power of the media was key to creating that legal change. But “The Ugly Truth” wasn’t just about marketing. It was about creating a San Diego-based social movement that could make a significant impact.

About our media strategy: The media strategy was also innovative and noteworthy. Our objective was to reach new audiences and “start a public conversation.” Kinetic developed a two-pronged Out-of-Home (OOH) media plan with broad reach, and a special focus on key targets. We sought out interactive, buzz worthy opportunities to stretch beyond general awareness and create engaged and sustained public conversations.

“The Ugly Truth” features billboards, radio spots, elevator and health club video ads, mobile billboards, bus shelter and trolley posters in English and Spanish. Our media buy also took advantage of travel, tourism and events in the city. During the Major League Baseball (MLB) All-Star game at San Diego’s Petco Park, we partnered with NMS’ ProjectionMan to project “truthful” and blatant facts on buildings along the stadium's traffic route. The ProjectionMan placement engaged the crowd and generated TV as well as online media coverage: http://www.cbs8.com/story/32432067/ugly-truth-campaign-shines-light-on-sex-trafficking A mobile billboard rounded out the media buy, allowing the campaign to expand its reach throughout the county, at events such as the popular Comic-Con event, and also at the Navy yard where sailors return to port.

The ad campaign Generated 33,250,528 impressions, as well as a notable amount of “free press” when the media covered the campaign and bloggers weighed in on its content and messages. Local TV news stations used the mobile billboard as a backdrop to their news stories: http://www.cbs8.com/story/32316100/awareness-campaign-fighting-sex-trafficking-set-to-launch-in-san-diego.

The combined outcome – creating a robust but respectful public conversation about the purchasing of persons – is what we seek to change people’s perceptions about prostitution and sex trafficking. 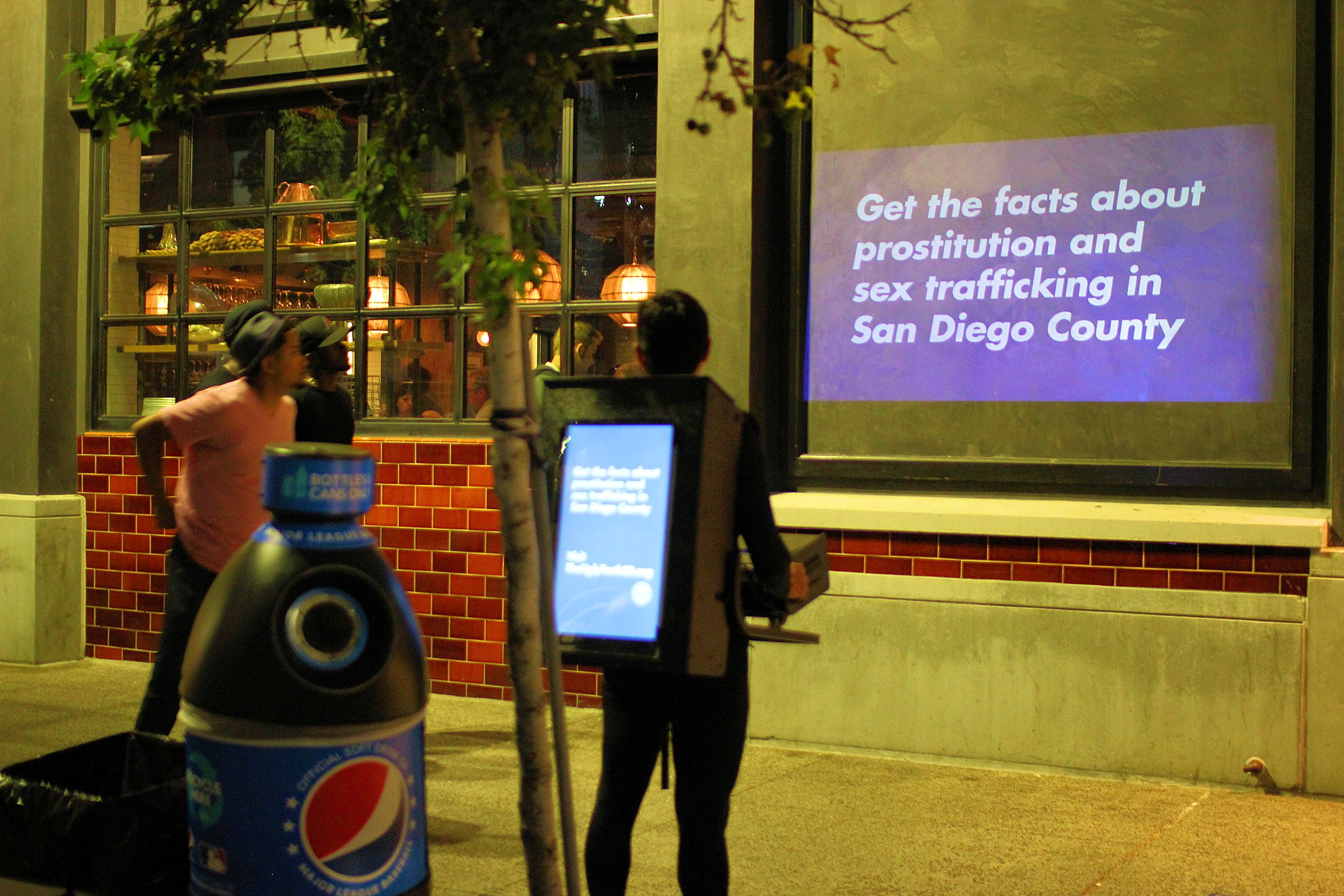 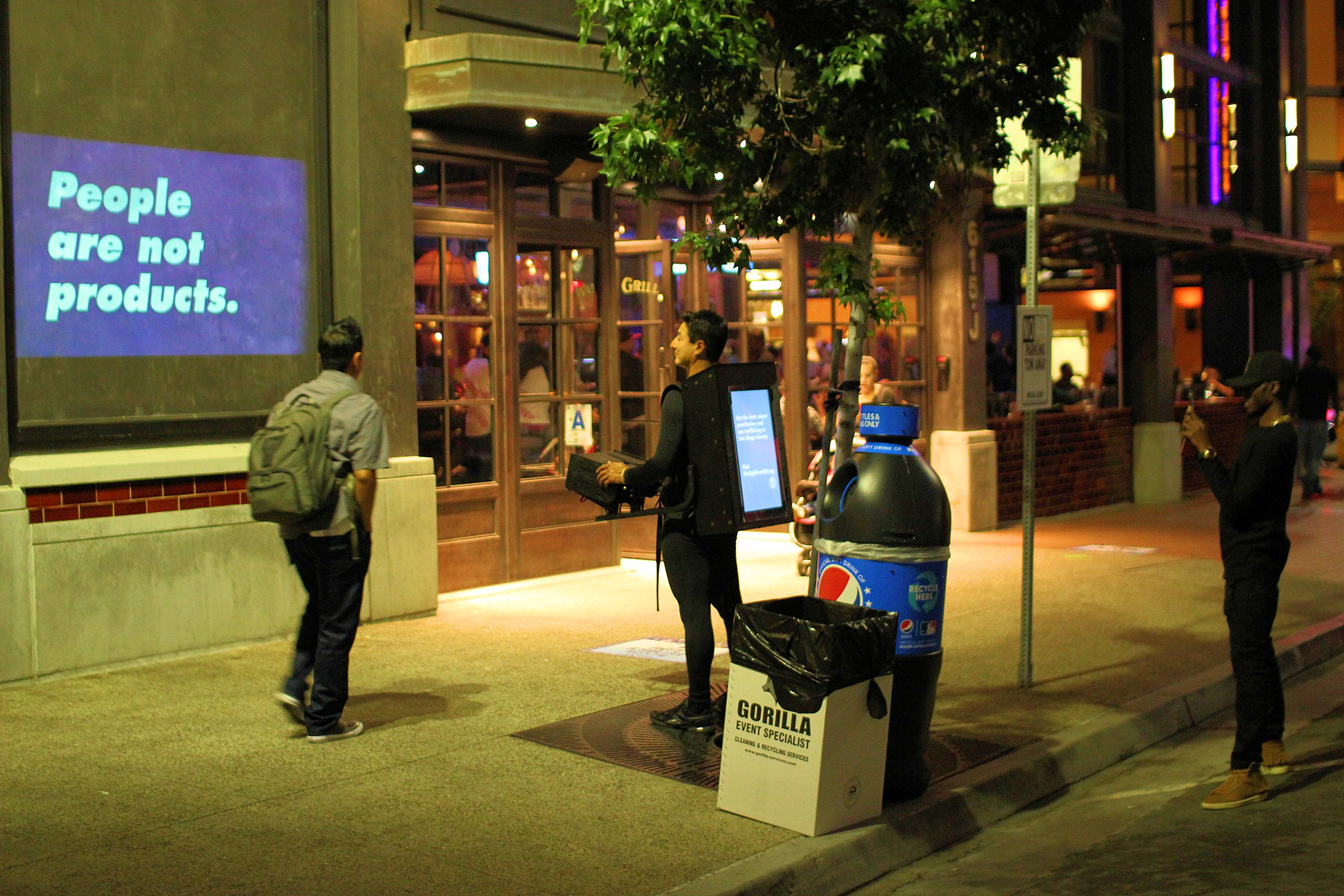 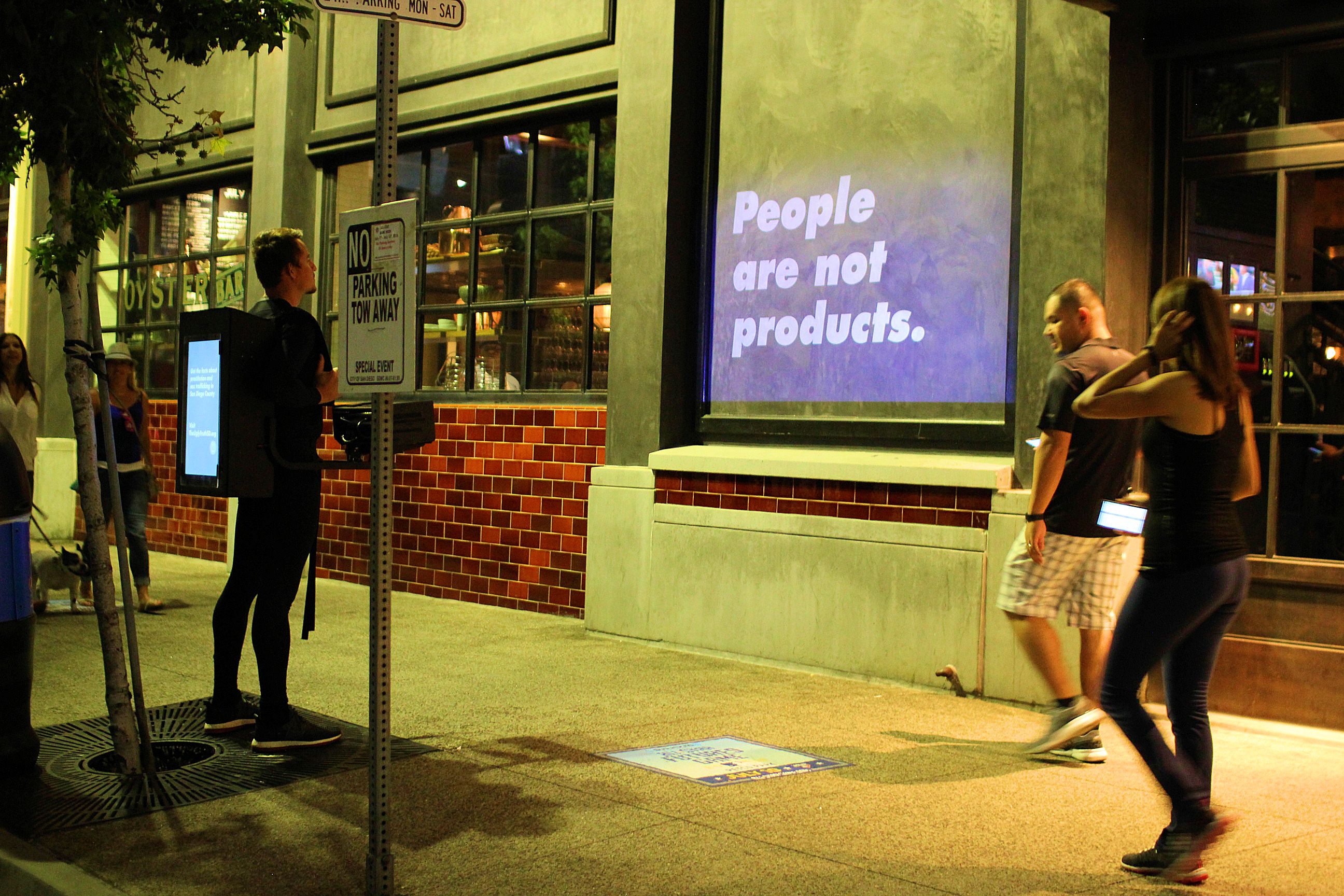 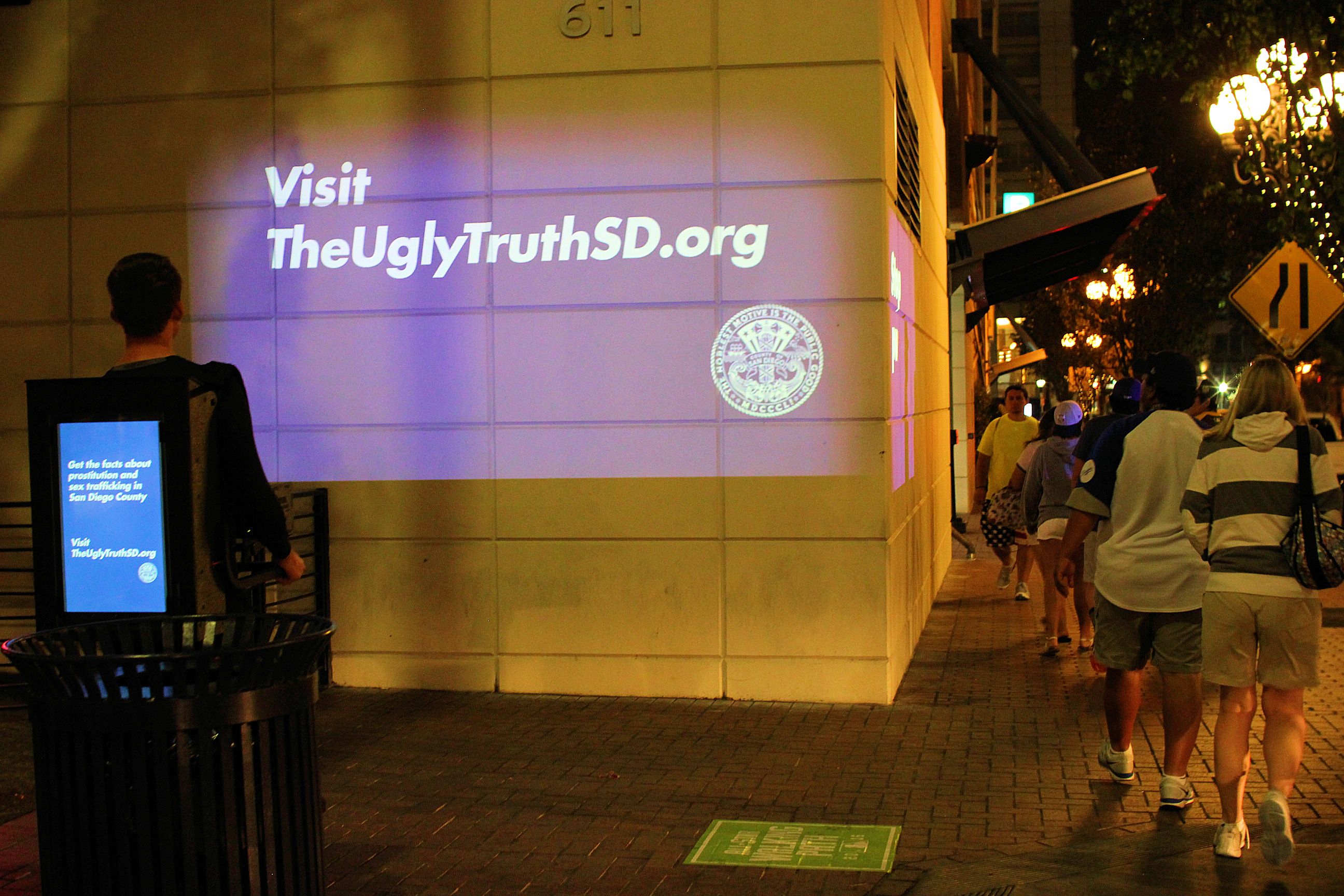 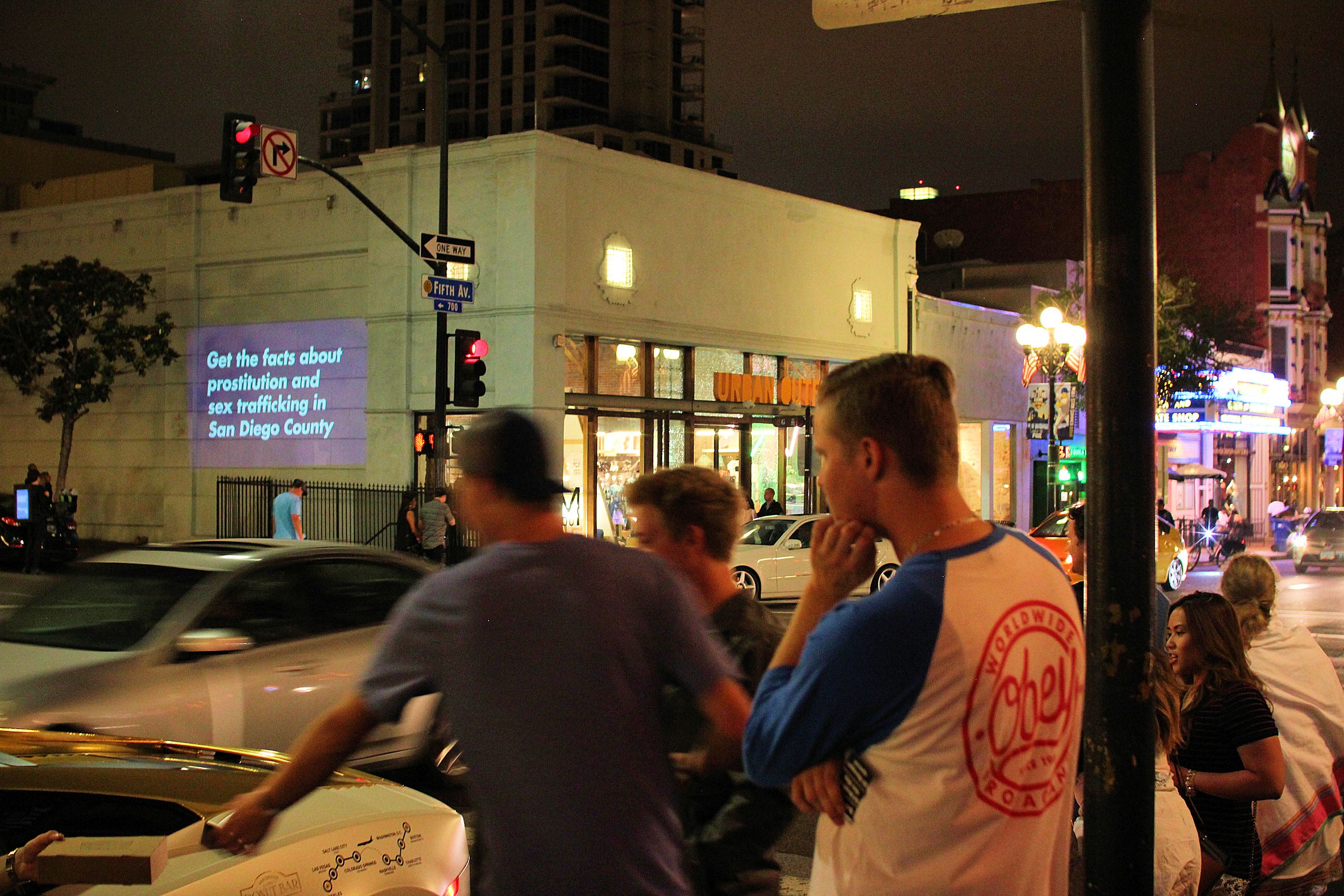