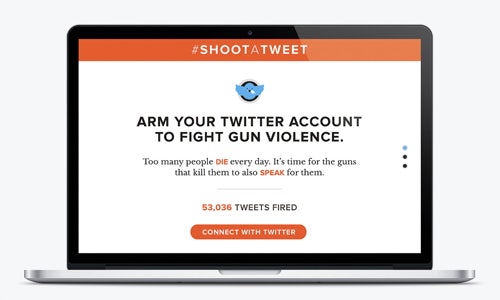 Entered in Civic Engagement, On a Shoestring

How do we make the daily toll of gun violence something Congress can't ignore?

The media does a great job making everyone aware of mass shootings. But what about the 88 Americans killed by guns daily? How can we give the people who want to help during these mass shootings the chance to speak out after every shooting—days, weeks, and months later? We turned to Twitter to create a bot that allows voters to automatically send a tweet to their elected officials every time a gun shoots someone in their area. With #ShootATweet the guns are now speaking for us—by automatically triggering tweets to Congress to pass new legislation to help reduce gun violence in our country.

>Increase the social media conversation around the continual effect of gun violence with the hashtag, #ShootATweet

>Offer communities affected by gun violence a tool to speak out to their elected officials.

We know that voter engagement on the issue of gun violence is centered around large, mass shooting events that gain national media coverage. And the same short-term concentration on the issue applies to members of Congress as well. We knew that if we made it easy to "Turn each gunshot into a Tweet to Congress" lapsed activists would eagerly agree to activate our Twitter bot to keep the issue top-of-mind with their elected officials.

LOCALLY RELEVANT: Once a user enters in their Twitter log-in info and their zipcode their Senator and Representative are sent a tweet whenever a new shooting occurs in their area.

REAL TIME RESPONSE: Whenever a shooting event is reported by a verified news source tweets are sent to the elected officials automatically.

NEWS WORTHY: Each tweet not only asks for new for laws to prevent more gun violence but it includes a link to a news story about the shooting event in their area along with the #ShootATweet tag to promote sharing to help advocates find tweets about shooting events in other states.

SOCIALLY ENGAGED: Our Twitter handle ShootATweetApp continued the #ShootATweet conversation along with RT-ing and responding to users who promote the site and the cause. As different social groups and gun violence hashtags trended, so did the messaging from @ShootATweetApp.

Within one month conversations using #ShootATweet had appeared in over 2.5 Million Twitter timelines.

#ShootATweet was a trending topic during the Sen. Chris Murphy's 15 hour Filibuster. Resulting in a vote on new gun laws.

Tweets from our social account, @ShootATweetApp have gained over 500K impressions with a social media budget of under 2K. Leading to an average 1.98% click to website rate (Top end 6.5% engagement).

Influencers from #MomsDemandAction, #LoveIsLove, #DisarmHate, and #BlackLivesMatter have all activated #ShootATweet on their twitter accounts as the issue of gun violence gains more supporters. 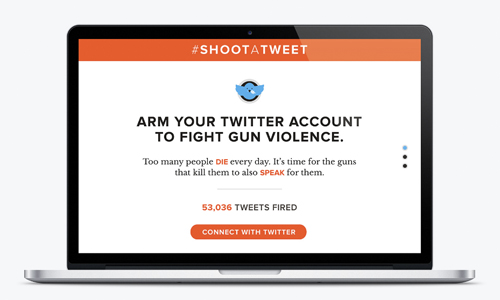 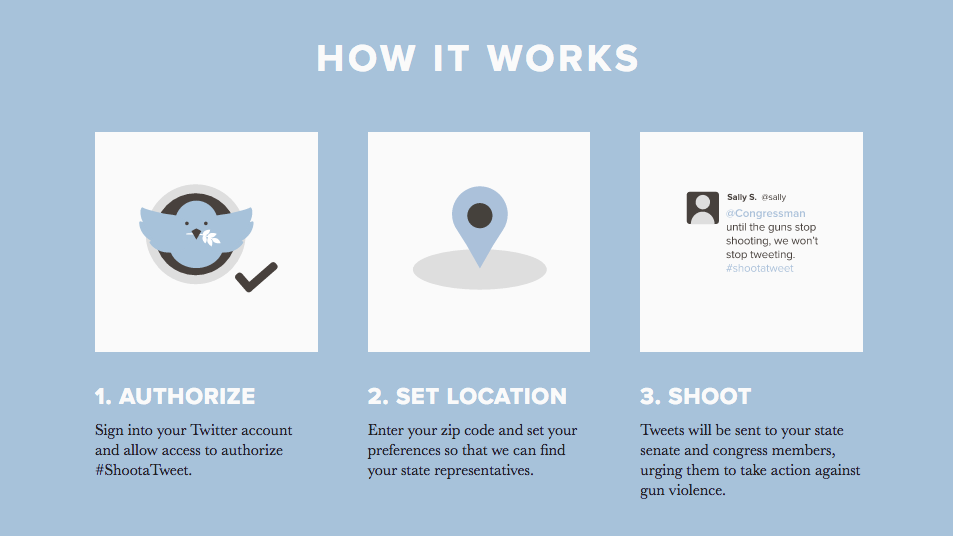 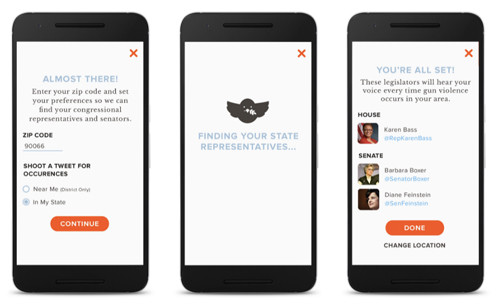