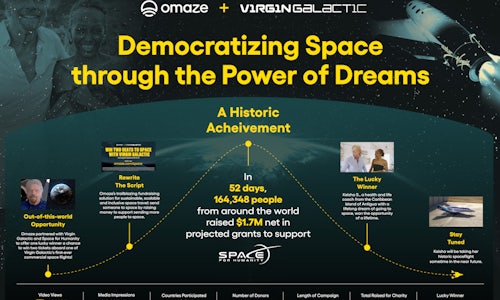 Democratizing Space Travel Through the Power of Dreams

With the united goal of democratizing space travel for all of humanity, Omaze (an online charity fundraising platform) partnered with Virgin Galactic (Sir Richard Branson's space exploration initiative) and Space for Humanity (a non-profit dedicated to democratizing civilian space travel) to send one lucky winner and their guest aboard one of Virgin Galactic’s first-ever commercial space flights.

Omaze’s fundraising platform offers everyone a chance to dream big and win once-in-a-lifetime prizes while helping to make the world a better place; a sustainable approach to fundraising that allows nonprofits to spend less time and money raising funds and instead focus on serving the needs of their communities while creating a new, inclusive generation of donors. Enter Space for Humanity and its mission to help develop the world’s first citizen astronaut program, ensuring it is sustainable, scalable and inclusive. They believe access to space allows the masses to gain a greater perspective of the earth and deeper empathy for fellow humans. The big conflict in accomplishing this? Raising global awareness and the necessary, monumental funds. Omaze’s trailblazing fundraising model and a partnership with Virgin Galactic offered a novel solution to this problem: send someone to space by raising money to support ongoing space exploration and education.

Through a sweepstakes open to a global audience, participants could donate to support the work of Space for Humanity and were automatically entered for the chance to win this once-in-a-lifetime experience. By positioning itself at the center of the cultural zeitgeist, Omaze could get the word out by targeting the broadest audience possible across multiple platforms both paid and organic: social media, SEO, YouTube, Display, connected TV and broadcast TV. This approach ensured that this experience truly walked the talk in democratizing the opportunity for all, while continuing to reinvent online charitable giving in new and fantastic ways. Through strategic data gathering, Omaze targeted a wide audience (consumer demographic/individuals/organizations) of men and women, ages 18 and up who would be interested in going on a once-in-a-lifetime trip to space. Targeted experience interests included space travel, science as well as pop-culture space themes ranging from science fiction in cinema, art and literature.

On the first day alone, Omaze raised over $600,000 to support Space for Humanity. The broadly targeted marketing and media efforts earned notable publicity placements, such as NBC's "Today Show" where Sir Richard Branson shared the experience’s mission and details. To create continual buzz around this once-in-a-lifetime experience, Omaze produced enticing and inspiring creative assets in-house ranging from social media posts and stories, emails to donors and non-donors and videos featuring Branson and Virgin Galactic. On the final day of the experience, the winner – Keisha S. – was randomly drawn from all eligible entries received from around the world. Delivering news of this magnitude to this lucky winner deserved much more fanfare than a casual telephone call. So, naturally, Branson and Omaze CEO Matt Pohlson traveled to Antigua to offer Keisha the life-changing news with a life-changing surprise – showing up at her front door accompanied by a film crew and a gift-wrapped flight suit.

In just 8 weeks, 164,348 members of the Omaze donor community were able to generate over $1.7M net in projected grants to support Space for Humanity and their effort to develop the first Sponsored Citizen Astronaut Program in human history. These funds, which will be granted from CAF America (actual grant figure to be confirmed following flight), will help Space for Humanity transform perspectives and train leaders to ensure an inclusive future in space. Other notable experience results include roughly 1 billion-plus impressions among various marketing channels in 52 days. Omaze’s community – and the press – lauded these efforts to democratize space travel, the first of its kind with the goal of many more to come.

Video for Democratizing Space Travel Through the Power of Dreams 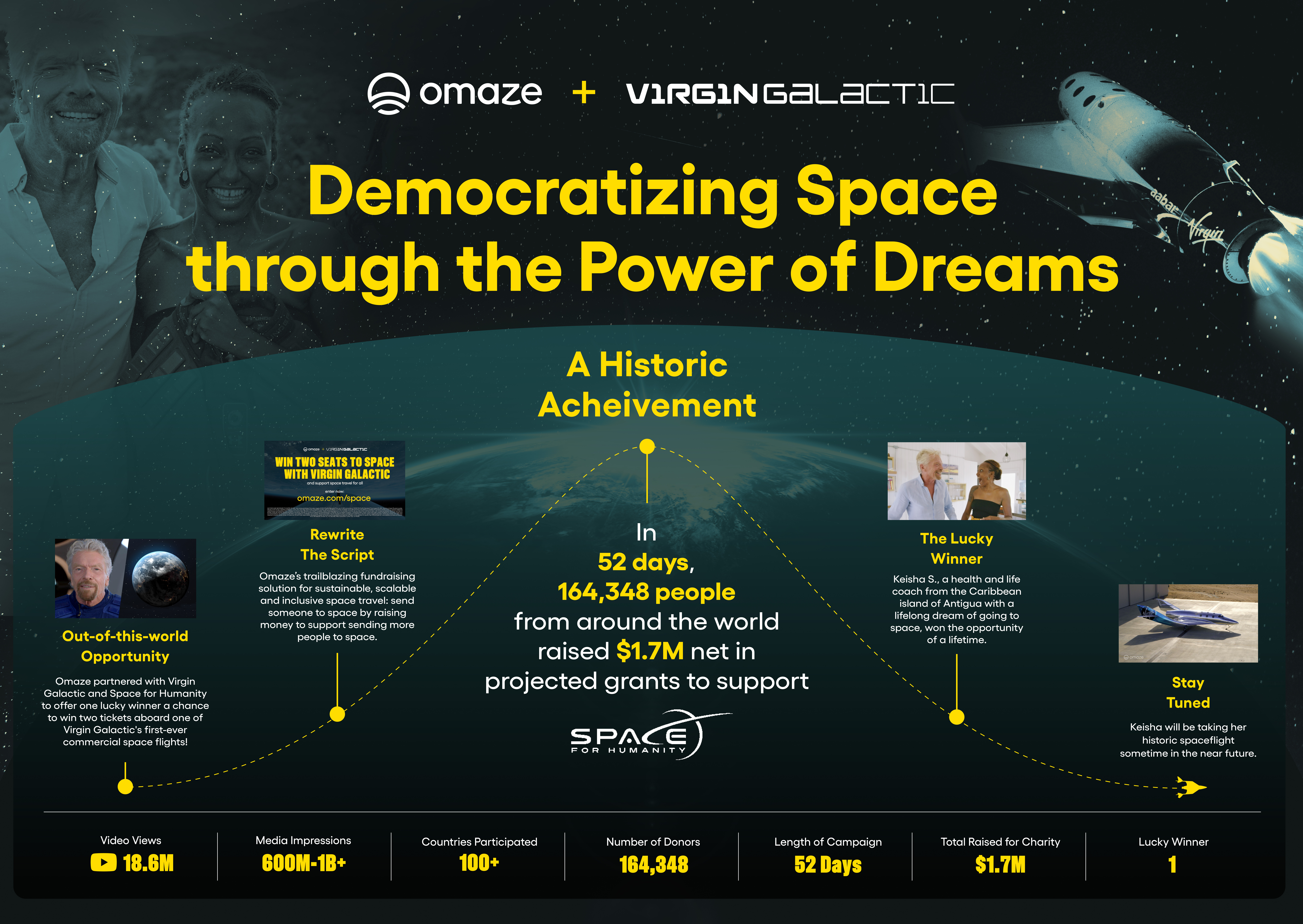