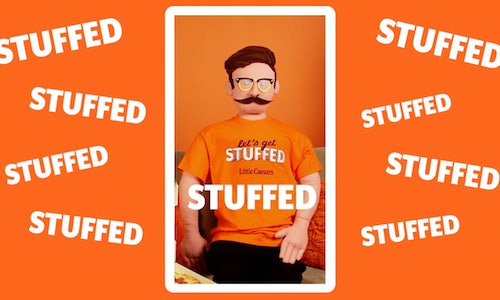 In June 2021, Little Caesars was launching the Pepperoni Stuffed Crust pizza, the latest demonstration of their brand positioning “crazy in all the best ways.” This pizza was Little Caesars take on the stuffed crust, with pepperoni on the pizza AND in the crust.

We needed people to get excited about this pizza, but that was going to be a challenge because stuffed crust pizza in general wasn’t anything new. And leading up to our campaign, Pizza Hut was promoting its Epic Stuffed Crust pizza across channels, including TikTok. Muddying the waters for our Pepperoni Stuffed Crust idea to catch on.

We needed a social-first activation that would get people talking about this product. So, we took to TikTok where culture and talk value starts. We were competing with every other brand (many of which had much bigger investments in the platform), as well as creators, and viral funny content. We needed to create a moment on the platform, even while being outspent by our QSR competitors. In the words of TikTokers “big yikes.”

Our goal was to leverage the TikTok platform to get people excited about our new Pepperoni Stuffed Crust pizza. With that, we built a campaign around getting as many people as possible to watch and engage with our content. We wanted something to “hit” on the platform. If that happened, with all eyes on TikTok, we knew we would get coverage and PR around our new pizza.

If you could transport yourself back to spring of 2021, you might remember the excitement we all felt going into a vaccinated summer. Everyone was making plans for travel, concerts, and getting back to bars and restaurants.

On the flip side, that excitement was tempered by the reality that even though the world was opening up, people still had to do all the responsible life stuff — like classes, working from home, and chores. We all wanted to get out there and let loose, but these mundane things were holding us back.

As the “fun” and “crazy” pizza brand, we thought we could do something about this.

We had three phases of the campaign: seed, engage, and boost.

Seed was meant to “recruit” a superfan into the fun with organic and paid videos on our TikTok channel. After over a year of watching the TikTok community, we noticed our 1:1 content performed better than our planned content. TikTok users wanted to be in on the fun.

Before officially launching our campaign, we ran a series of posts featuring inanimate glass objects stuffed with pepperoni and had people guess “How Much ‘Roni.” Fans didn’t know this, but in guessing a number they were raising their chance to be surprised with their very own stuffed doppelganger.

Engage created excitement within our community around the idea. We identified creators who were a good brand fit — aka willing to get weird with us — and sent them their very own pepperoni and cheese stuffed doppelganger.

Keeping these stuffed doppelgangers a surprise was key. We wanted reactions to be authentic and outrageous. In a way, these doppelgangers became our core piece of content and were the star of videos that brought our insight and the product connection to life. Together, all this content worked to help explain the idea and invite people to join the fun.

Boost was all about amplifying our idea with paid support and community management in the comments section. Our “How Much ‘Roni” winning fan @westheghost had an incredible unboxing video of his doppelganger. Think about it, out of nowhere Little Caesars is sending you a life-sized you stuffed with felt pepperoni and cheese.

Unsurprisingly, this content started getting tons of engagement and shares. We went all in boosting this fan reaction video. Not just through paid, but organically too, by boosting the fun and encouraging sharing in the comments section (the first place everyone looks when they see something outrageous). All this led to the content going viral on the platform and spilling over into other platforms like Reddit, Twitter, and Instagram.

The campaign was a little risky. It relied on trusting our fans and creators to get weird with us, but ultimately, it paid off.

And boosting our fan @westheghost paid off, too.

Influencers reached out to us, asking if they could collab with us in the future. And we had fans asking us where they could buy the “Let’s Get Stuffed” t-shirt that our creators and doppelgangers were wearing.

All this buzz in the social sphere led to PR coverage from the likes of The Drum, AdAge, and Pizza Magazine, which meant even more people were learning about this new crazy product from Little Caesars.

In the words of @zamthewriter “All these Little Caesars tiktoks might convince me to try some @littlecaesars for the first time in my life??????” 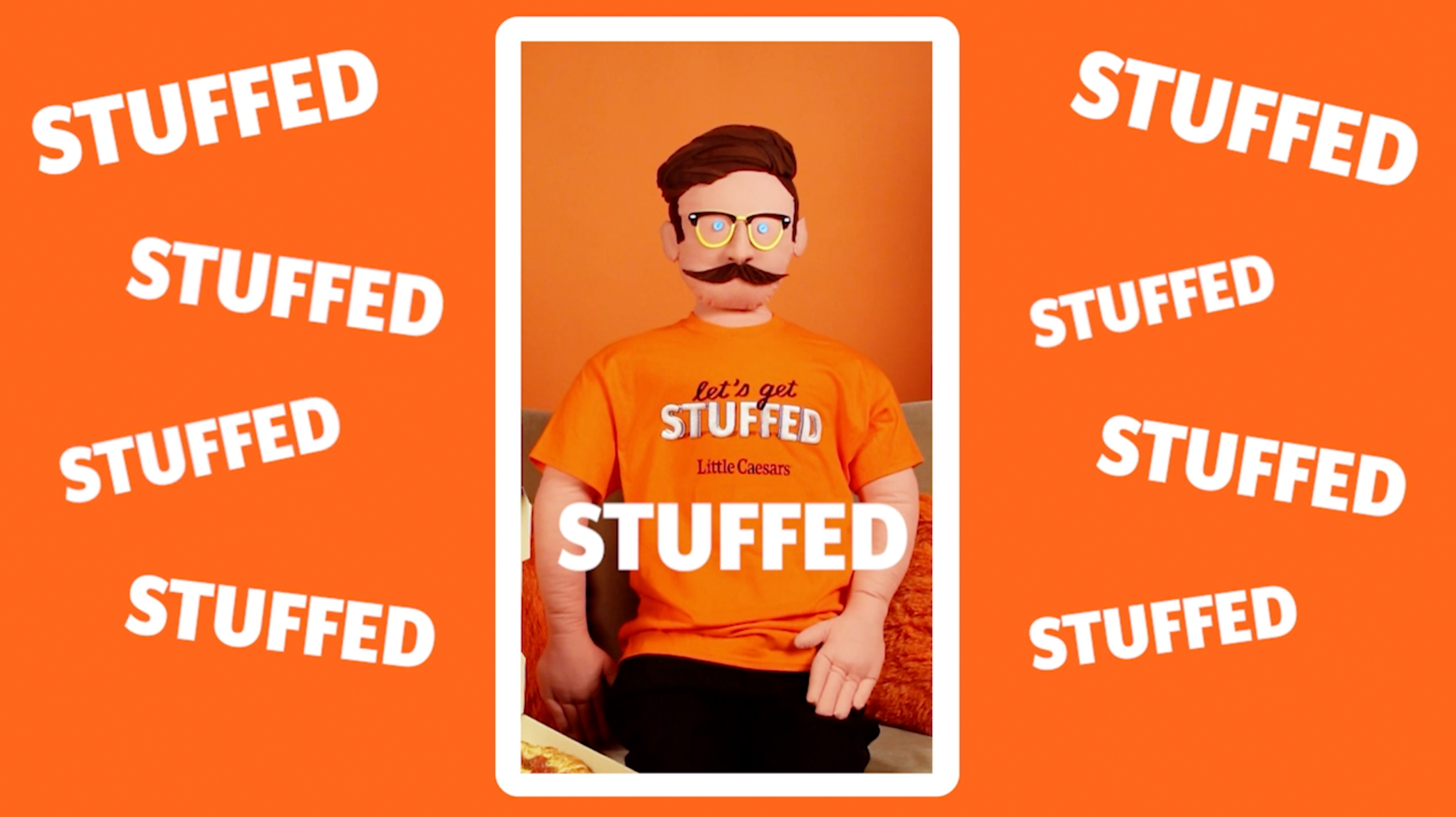 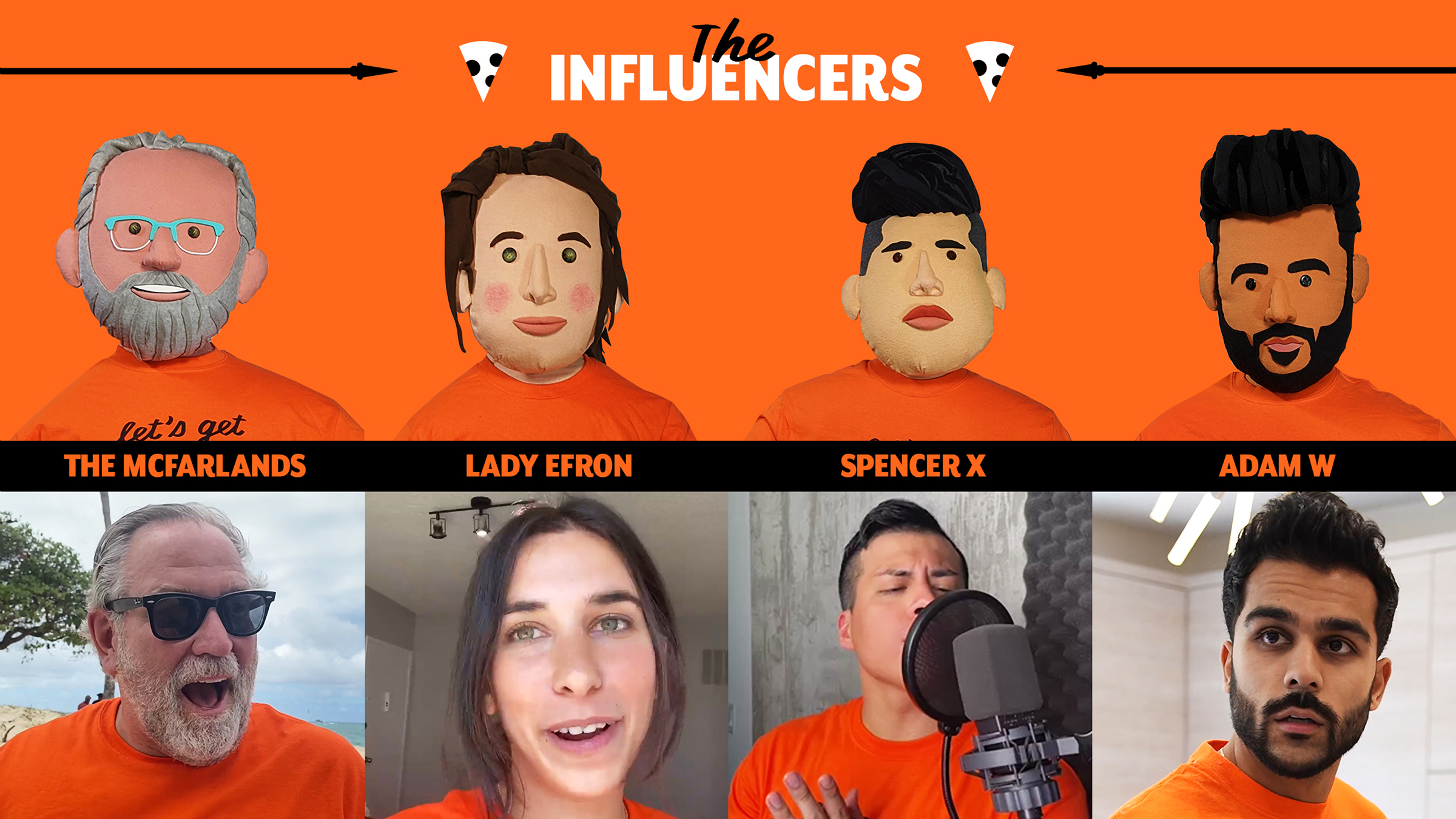 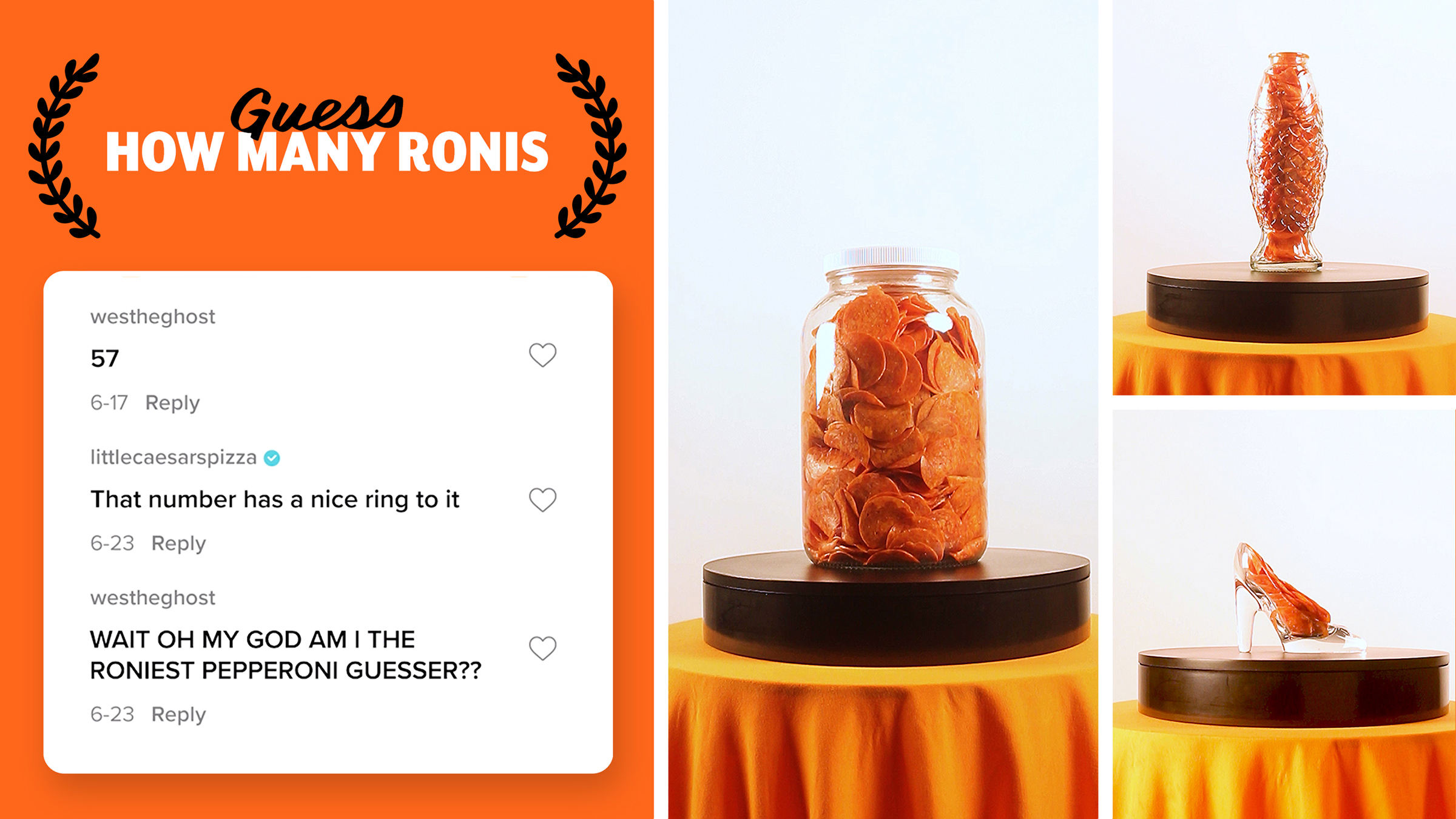 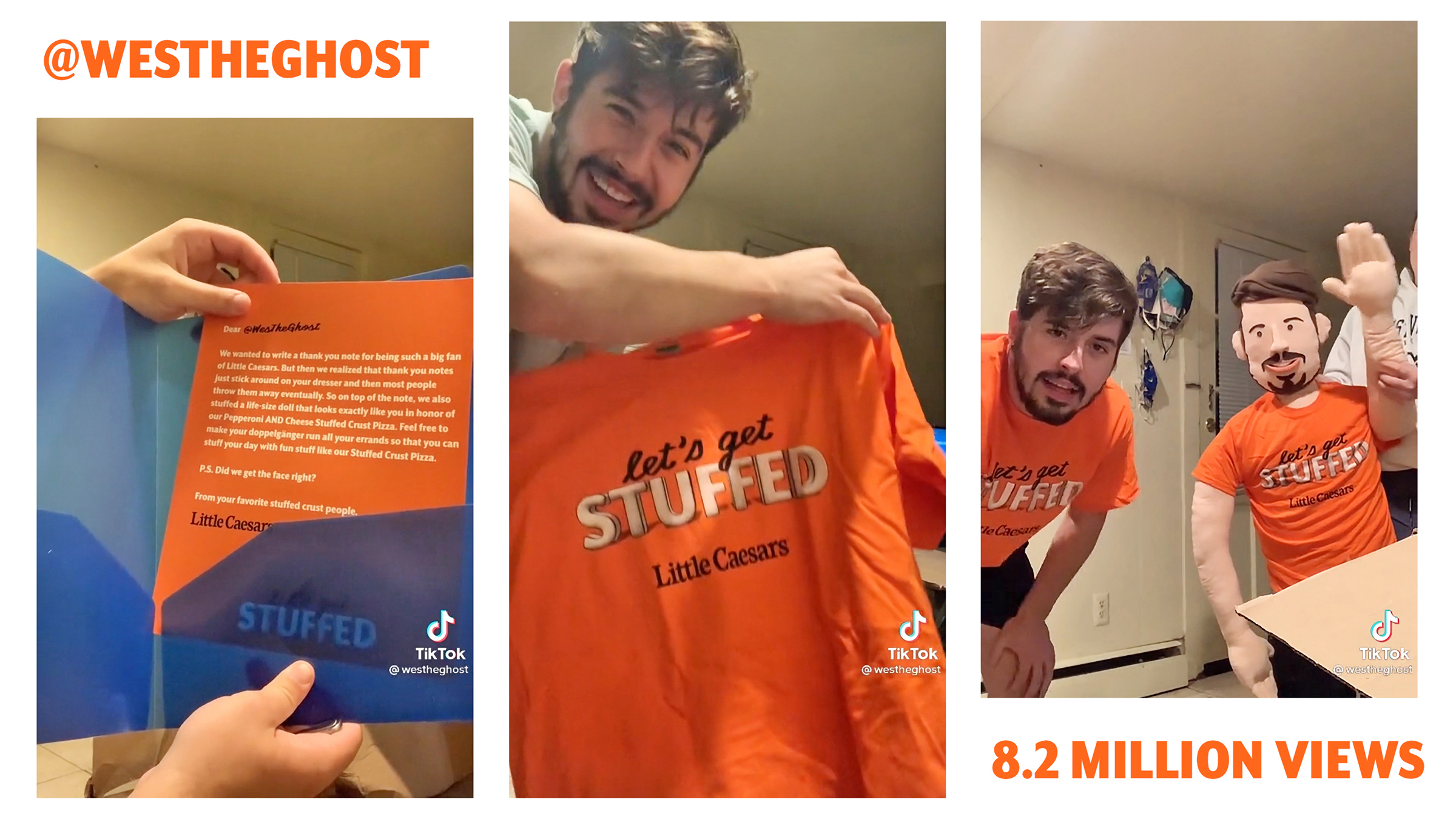 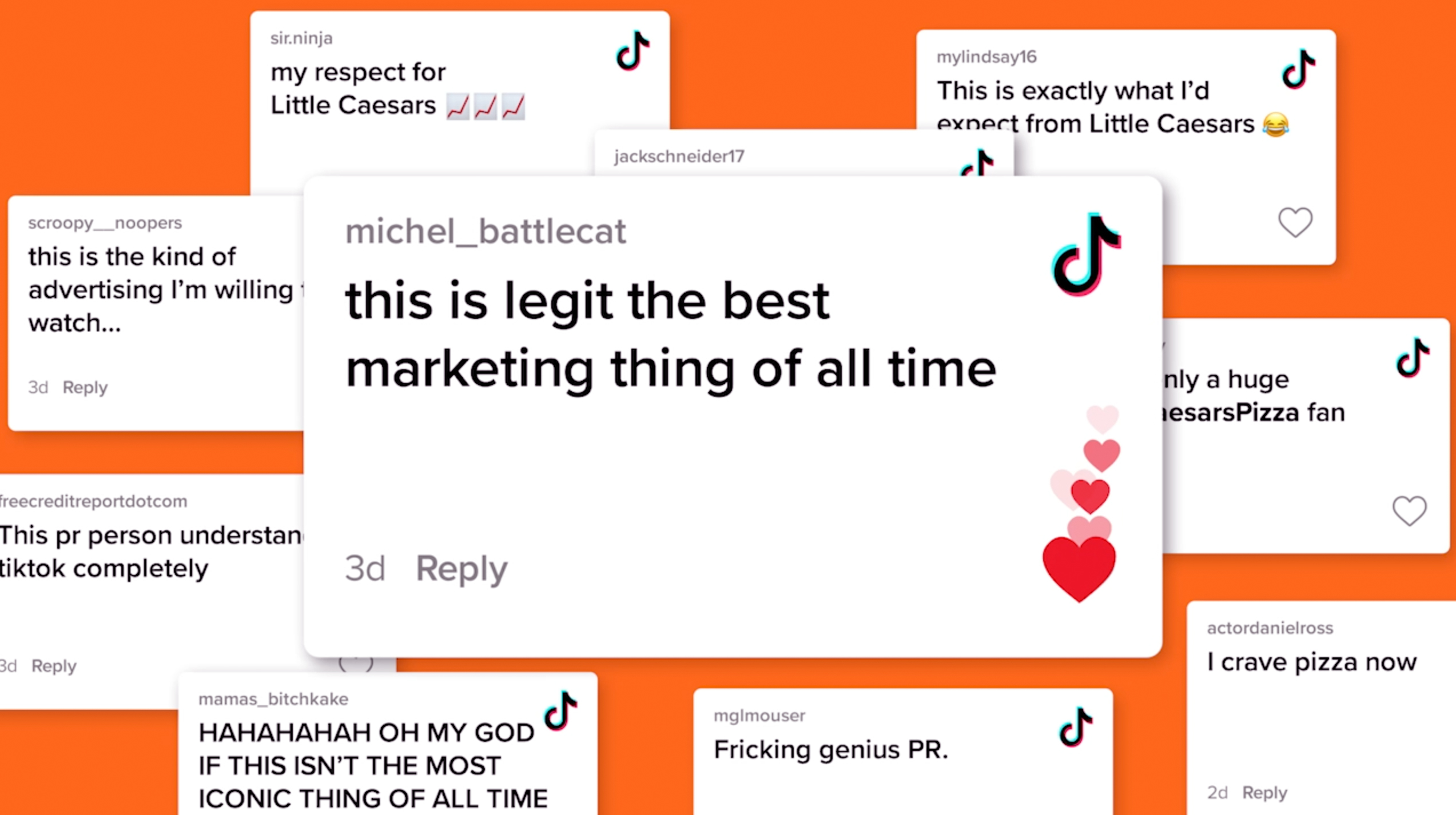