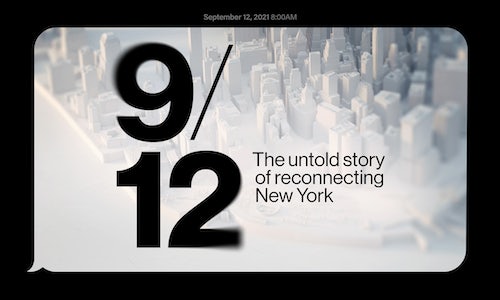 On September 11th,  2001, the world changed forever.  In the aftermath, New York was left devastated and disconnected. With phone lines down, disrupted cell service, and Wall Street catastrophically offline—it was chaos and confusion. Verizon’s 140 West Street building—the central telecommunications hub for Lower Manhattan—was also badly damaged at Ground Zero.  Its restoration became crucial for the comeback of the city, as well as the nation. The next day, over 14,000 Verizon employees mobilized, risking their lives to reconnect New York. These stories never made the headlines. So on the 20th anniversary of 9/11, we honored those brave men and women from 2001  with an experience created exclusively for all Verizon employees.

A story that’s never been told, in a format that’s never been used before: text messages. In 2001 it was the most innovative way to communicate, and now in 2020, it’s the most personal. The 1:1 nature of a text gave us a meaningful platform to share the emotional stories that emerged in the days after. With over 30 Verizon employees from 2001 interviewed,  a timeline was established. Every text documenting a moment, an action or a story delivered at the time they actually happened 20 years ago on September 12th.

We invited users to step  into the timeline of 9/12, in a one-day, real-time immersive documentary that puts you in the shoes of the Verizon employees who sprang into action on September 12th.  Eleven personal stories are told through MMS native content such as immersive phone calls that reenact historical moments , 360º interactive maps of downtown Manhattan, and AR “before-and-after” filters. It’s a nod to the basic tech of 2001, while featuring the cutting-edge mobile experiences of today—a story about the past, with a modern twist.

Because this had never been done before, we had to problem solve  how we could simultaneously send out mass amounts of text messages with high volume content. For the first time ever, we used Twilio-driven SMS technology to create an interactive narrative, making careful tweaks throughout production to ensure content was delivered at the right time and in the right order to remain historically accurate. AR and WebGL were also used to create the 3D scenes and buildings for users to explore and to visualize the extent of the structural damage to the Verizon headquarters.

Our success comes from creating a whole new multimedia MMS platform. Existing phone  apps became the springboard for immersive storytelling. Leveraging every native tool within a text conversation, viewers received a series of personal, poignant employee stories at the times they actually happened on September 12th, 2001.

Video for 9/12: The untold story of reconnecting New York 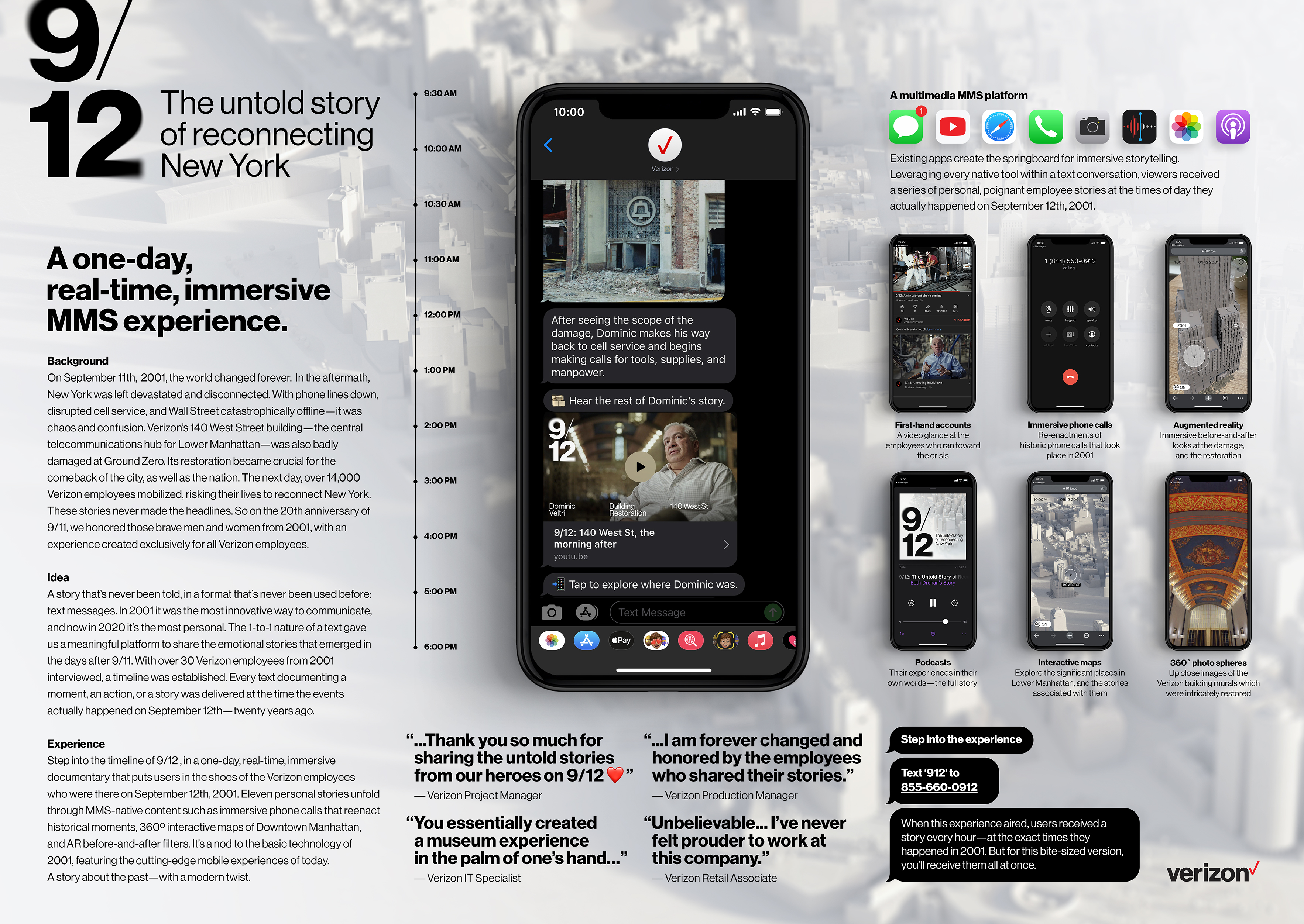 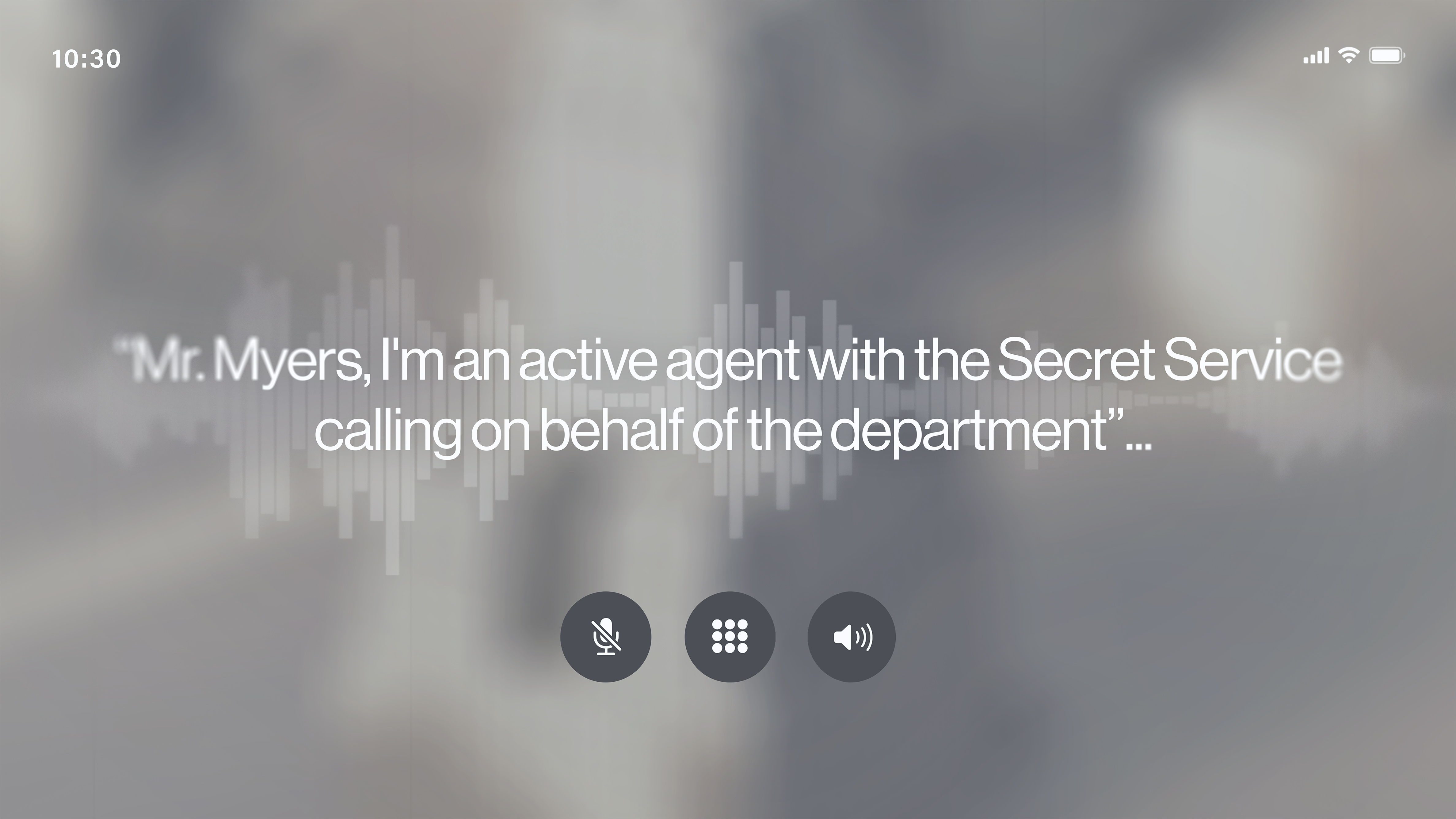 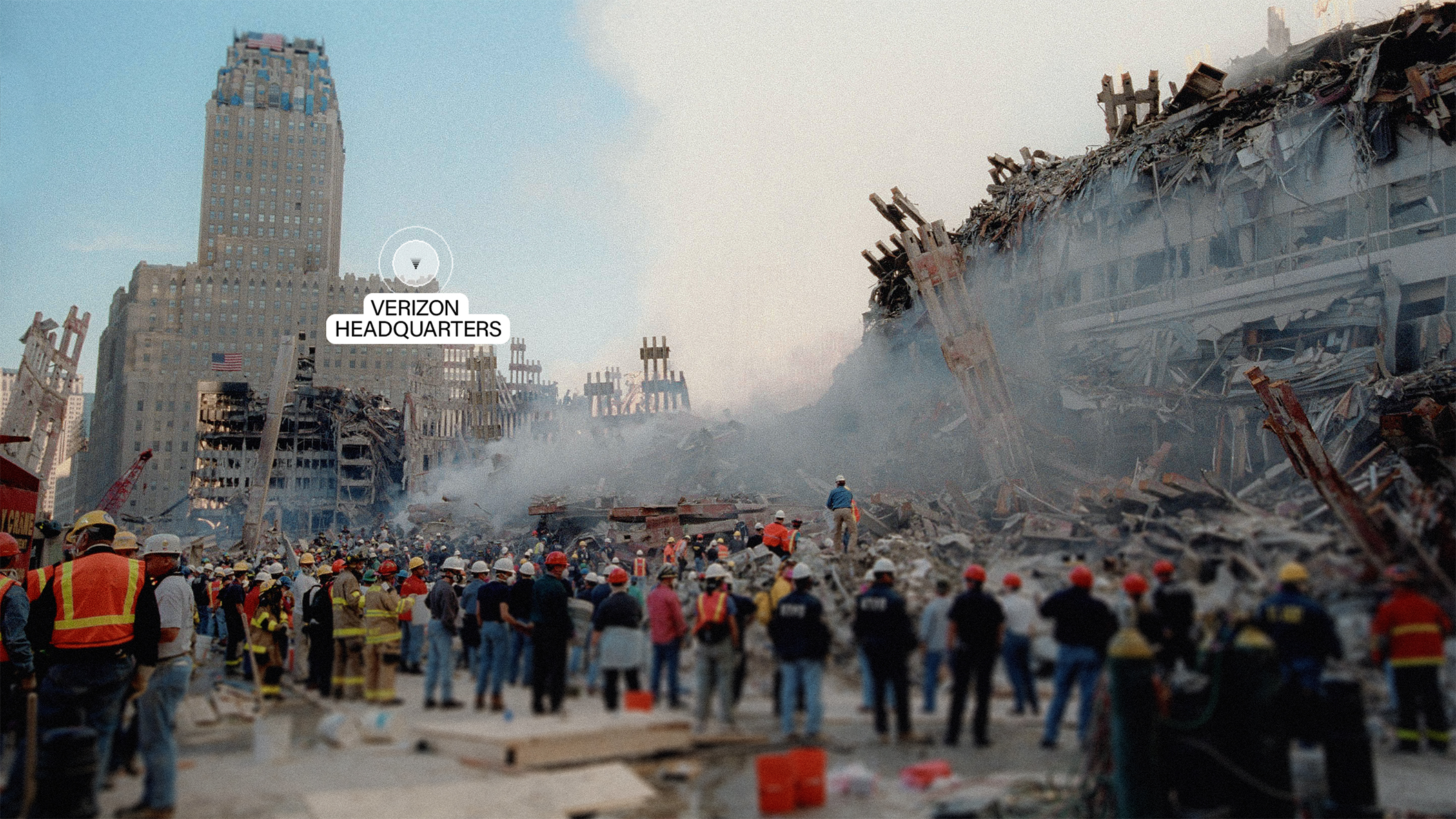 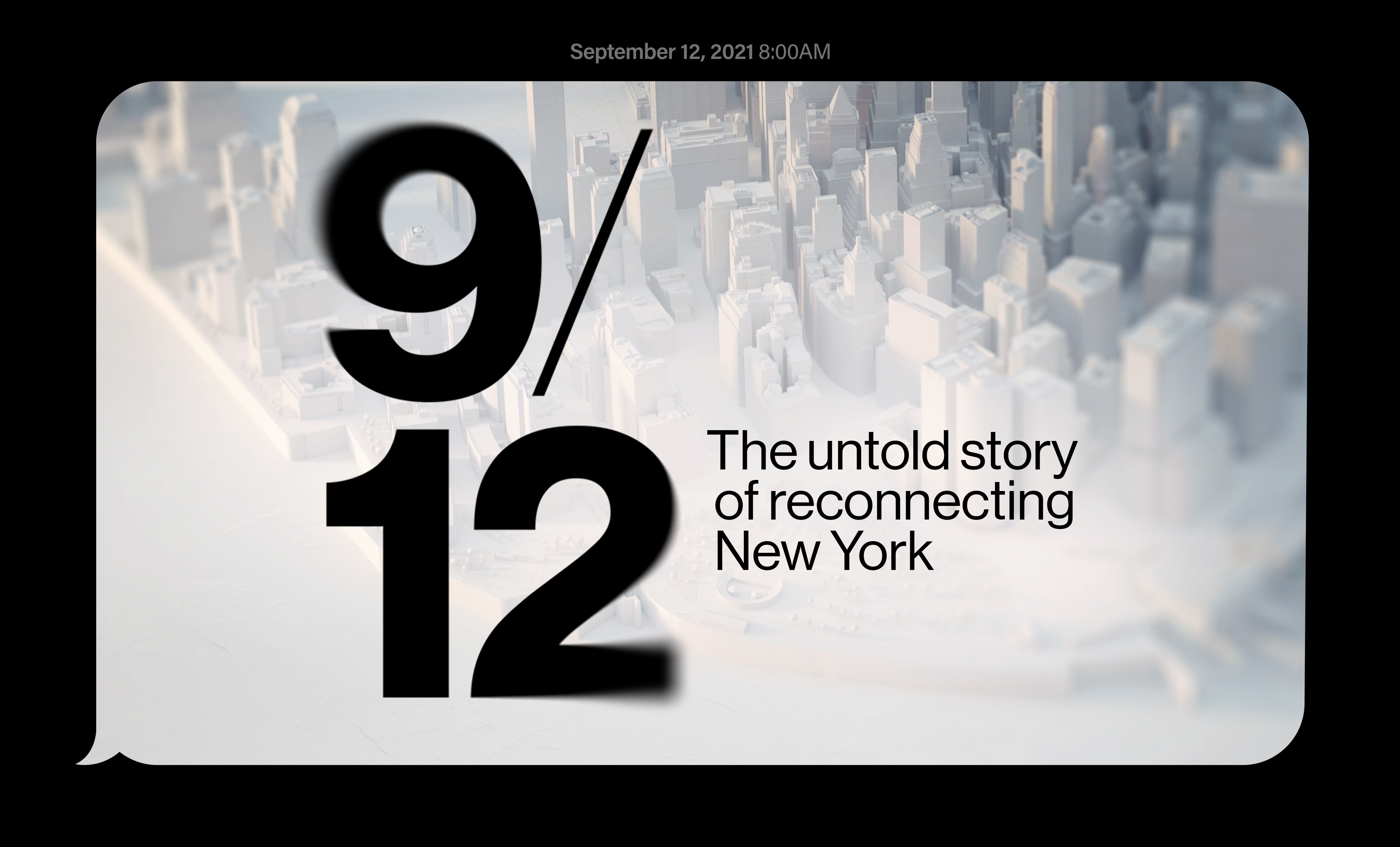 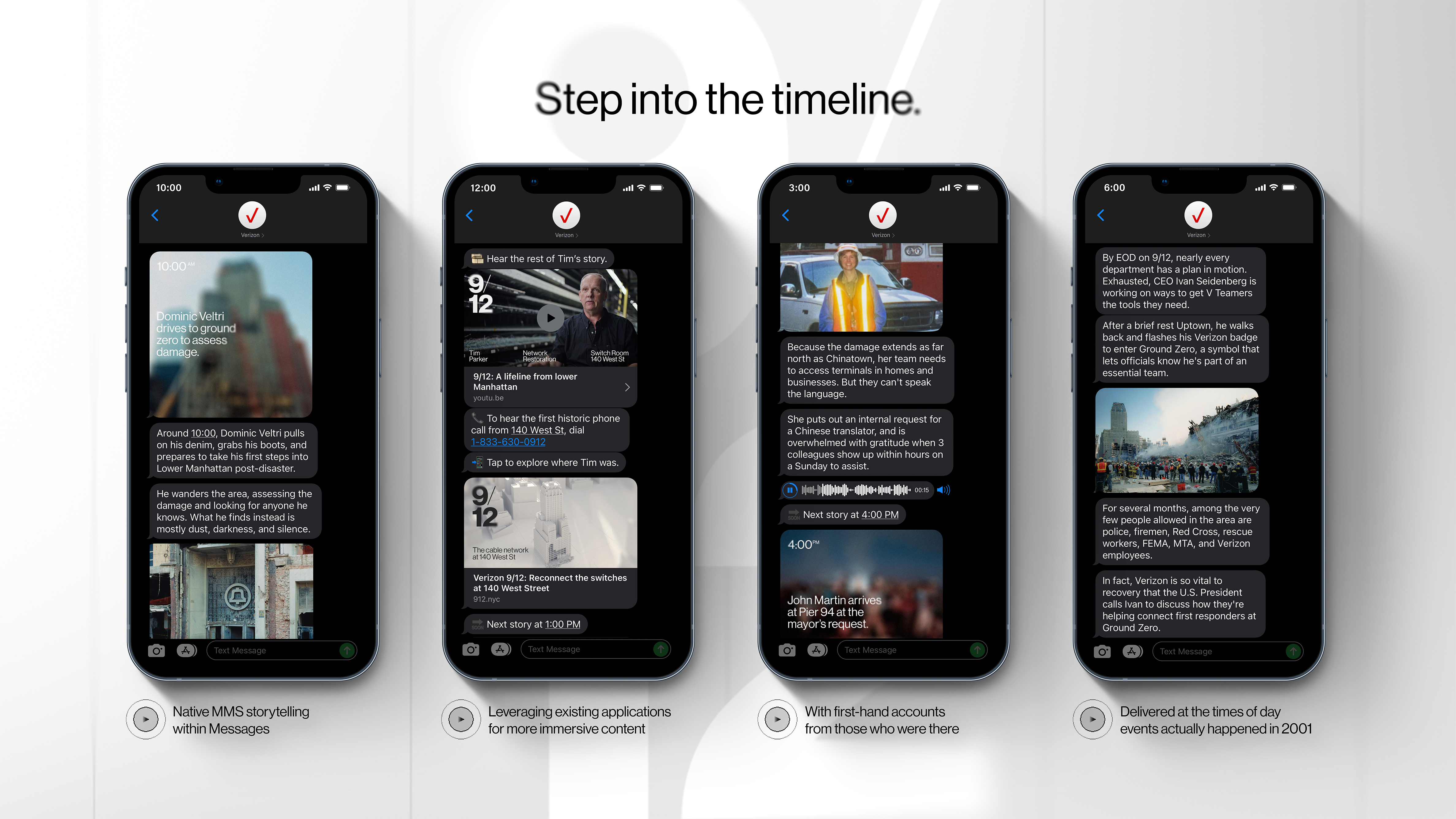 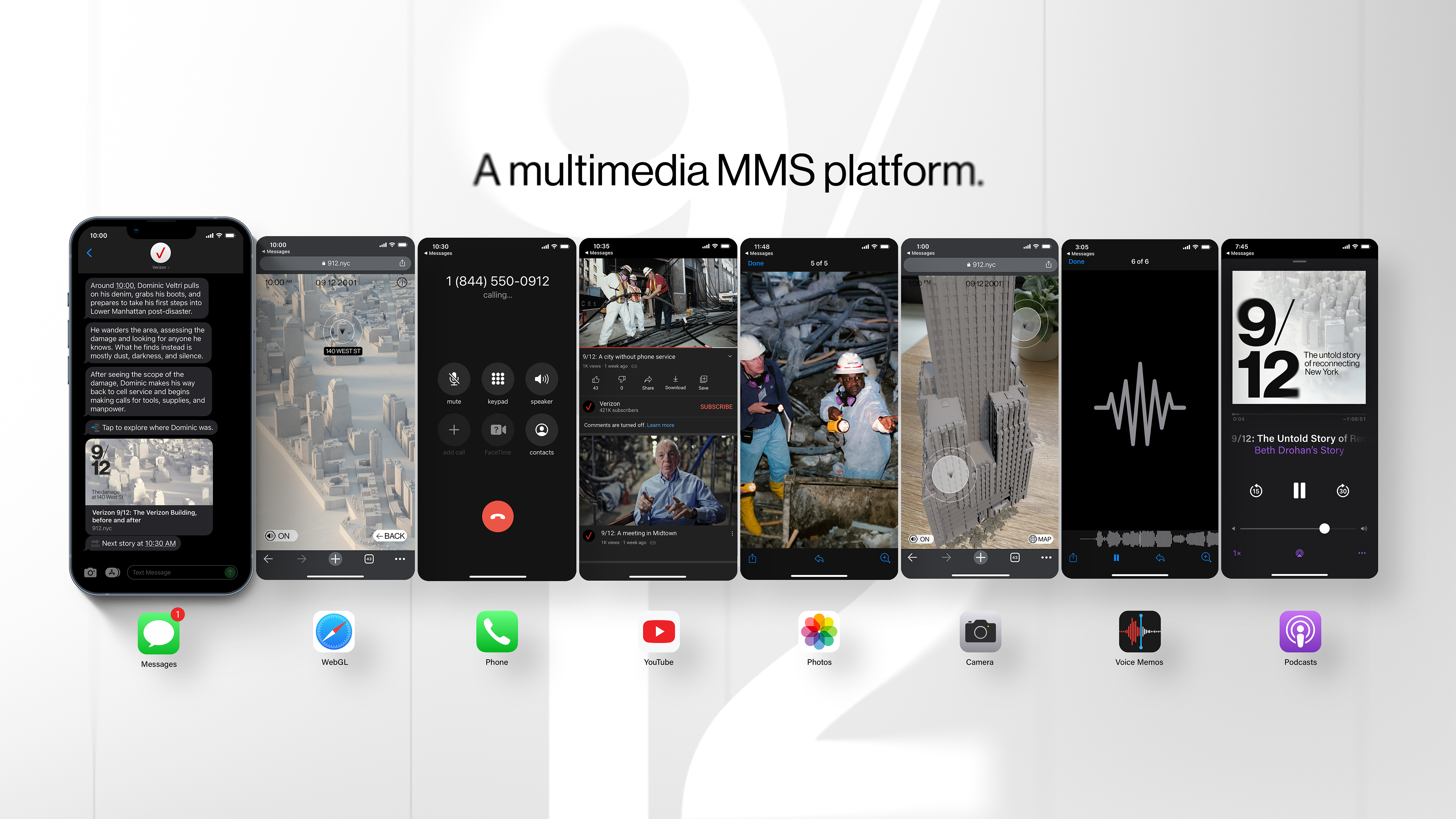 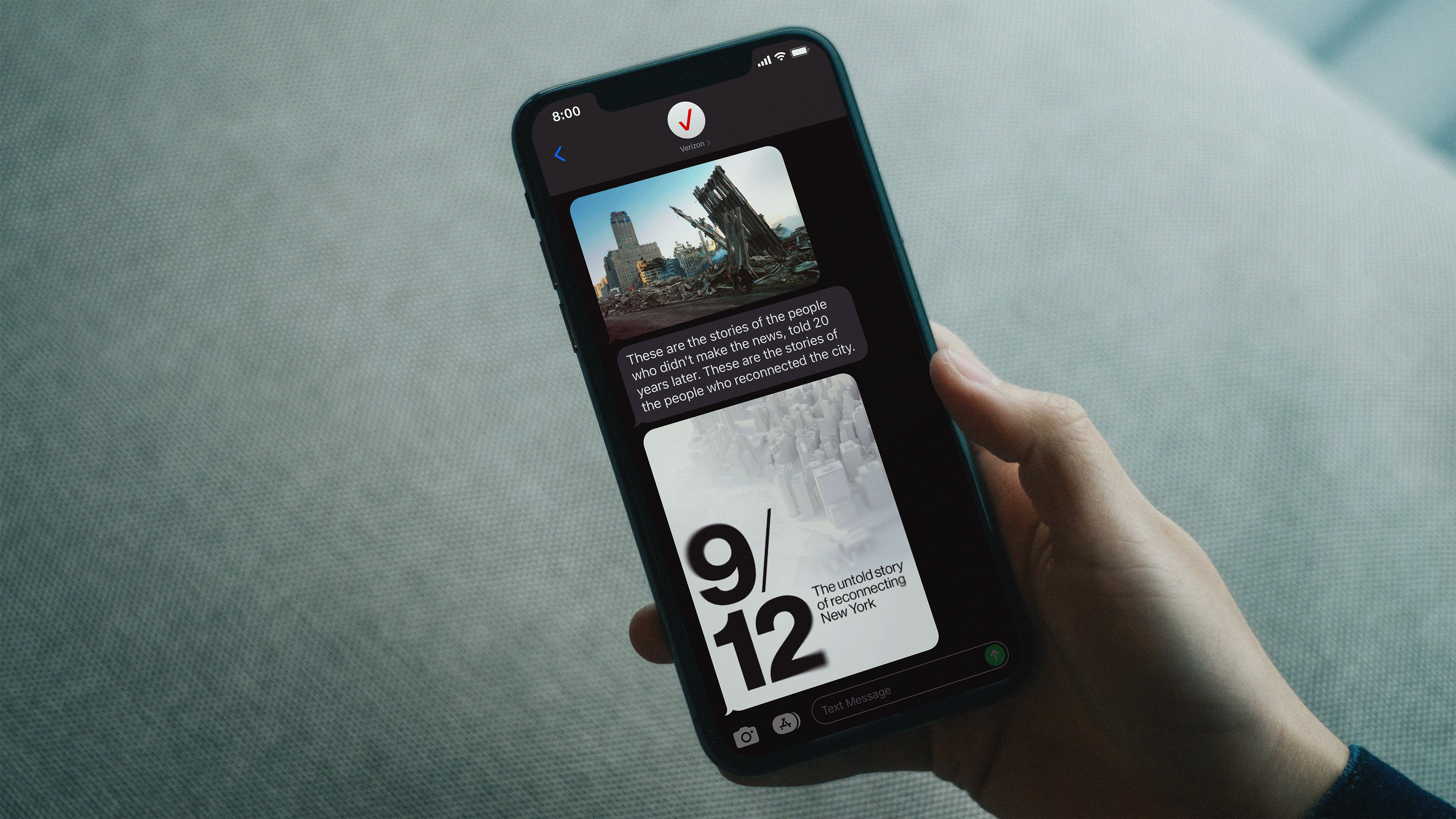