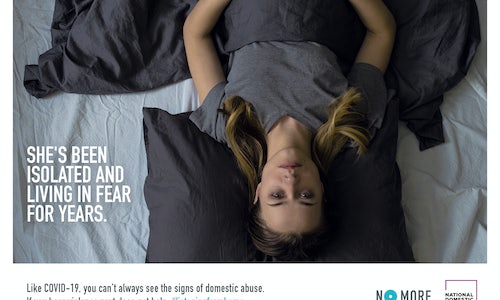 Suddenly the world went into lockdown due to COVID-19. Home was supposed to be a safe place, but for victims of domestic violence, lockdown meant being trapped with their abusers, 24 hours a day. As a result, across the country and the world, incidents of domestic abuse rose exponentially.

The NO MORE Foundation -- a nonprofit dedicated to ending domestic and sexual violence by increasing awareness, inspiring action and fueling culture change -- sought to heighten awareness of domestic violence in this moment and encourage people to safely get help if they experience, hear or observe incidents of abuse. NO MORE enlisted MRM UK to create a campaign that would get the message out quickly and effectively.

Like with COVID-19, the signs of domestic violence are not always visible. However, since people were home more, they might have heard more coming from their neighbors’ homes than usual. NO MORE wanted to engage those people as allies in the effort to stop the epidemic of domestic violence— at that critical moment, as well as beyond the immediate crisis.

The United Nations described the worldwide increase in domestic abuse as a "shadow pandemic" alongside COVID-19, with a rise of at least 20% of cases, globally. Preliminary data shows domestic violence homicides in 2020 were twice 2019 totals in the United States—nearly all of them occurring since COVID-19 began. Globally, the pandemic is expected to cause a one-third reduction in progress toward the United Nations Sustainable Development Goal (SDG) of ending gender-based violence. And, just like with the virus, this is based only on the cases reported.

NO MORE and MRM realized the world was in a moment in time when we could activate millions who were suddenly working from home. They had more time to pay attention and potentially could be hearing or observing signs of domestic violence. The idea for #listeningfromhome was born.

MRM first created a social media campaign. Given the urgency of the effort and the limitations of the pandemic lockdown, there was no time to shoot new photography, but MRM UK found images that represented the diverse spectrum of potential victims of abuse. A production company, Great Guns, had 40 directors work on treatments for the PSA and they sent options back in two days. The selected film concept was produced in only 10 days, despite the difficult circumstances of lockdown measures. The Director directed the spot remotely over FaceTime. The Director of Photography shot from his car and his housemates served as the talent, filming in their own home. It was all captured in one long, dramatic shot.

It was critical to NO MORE to clearly point people to the resources available to get involved and get help. In the U.S. NO MORE teamed up with the National Domestic Violence Hotline to include The Hotline (1-800-799-7233) in the spot, posters and social media content. In the U.K., the audience was directed to find local support through the Bright Sky App. Viewers were also directed to call the police in case of an emergency and to learn more about all forms of abuse at nomore.org.

In order to reach the widest audience possible, NO MORE sought to create partnerships for the campaign. They were able to enlist the NFL Network, Univision and Lamar billboards pro bono to run the PSA and posters in the U.S. They also teamed with the Royal Pharmaceutical Society to share the campaign in pharmacies throughout the U.K. NO MORE and MRM also worked on a publicity effort to garner more awareness of the effort.

Recognizing the PSA and images were very strong and powerful, NO MORE wanted to make sure that it would not be triggering for survivors of violence. They made sure to include a sensitive warning label for viewers in all communications.

The #Listeningfromhome campaign was a huge success in reaching millions of people and increasing awareness and action to address the surge in domestic violence due to the COVID-19 pandemic.

In addition to NO MORE's platforms reaching millions of people, the PSA aired in the U.S. on NFL Network and Univision where it received tens of millions of impressions. Lamar Advertising ran the posters on 300 digital billboards in more than 50 top U.S. markets for at least six weeks. In the U.K., the campaign was carried in hundreds of pharmacies and on key billboards.

The campaign also met its goal of getting more people to take action and get help. Reports of domestic abuse by neighbors rose by more than 10%. Downloads of the Bright Sky App rose by 49% and hotlines (national and local) received an increase in calls. After the launch of the #ListeningFromHome PSA, NO MORE saw a dramatic increase in social media engagement. The PSA and posters garnered nearly 2 million impressions on Facebook and Twitter alone. Traffic to the NO MORE website went up more than 35% in just the first two days of the campaign and continued to increase over time.

The feedback was  also incredibly positive. The campaign was highlighted by several media outlets including Ad Week, Campaign Live, The Drum, Little Black Book and more. Survivors of domestic violence commented on NO MORE's social media platforms how much they appreciated the PSA and entire campaign.

Video for NO MORE Foundation's "Listening from Home" Campaign 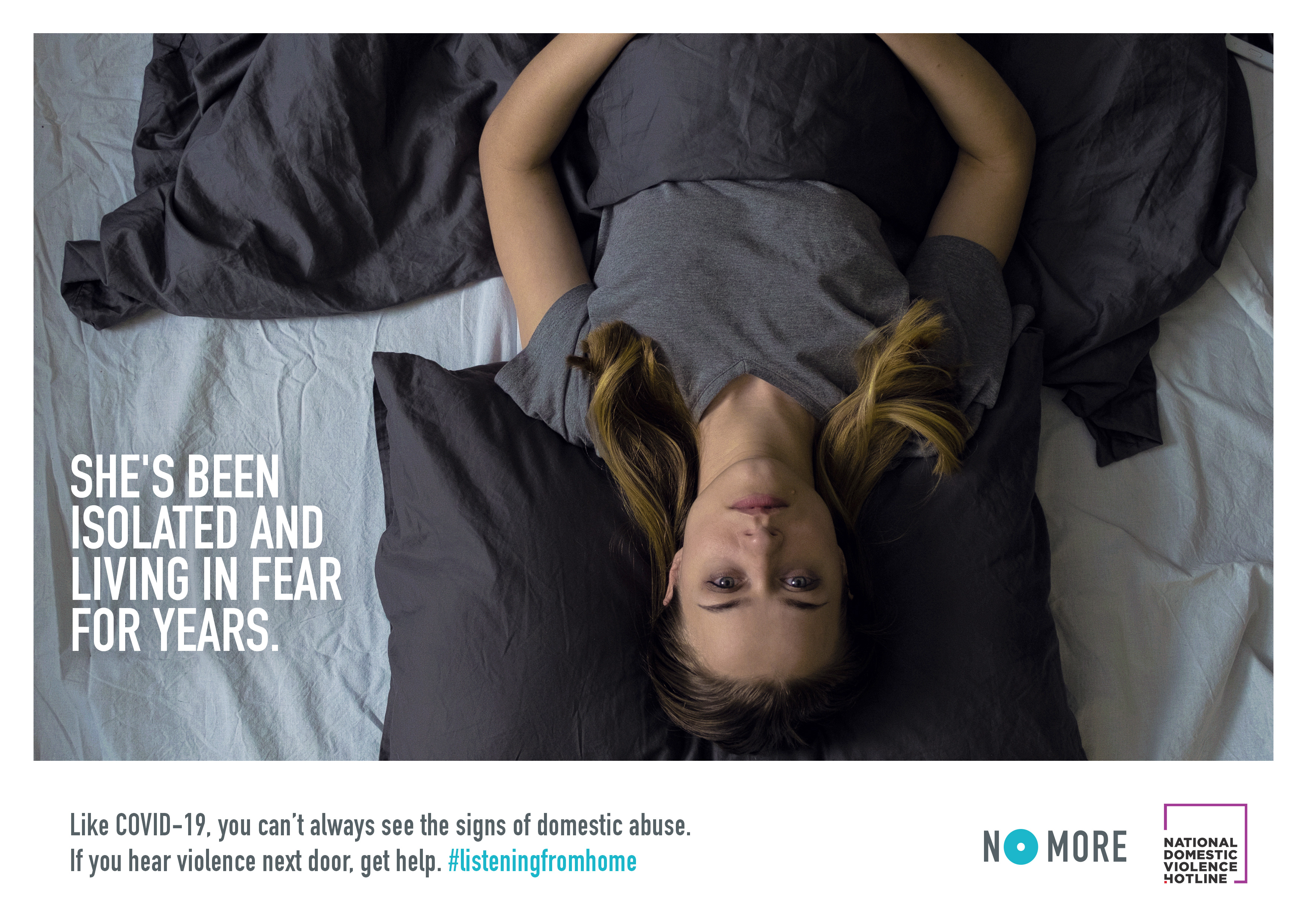 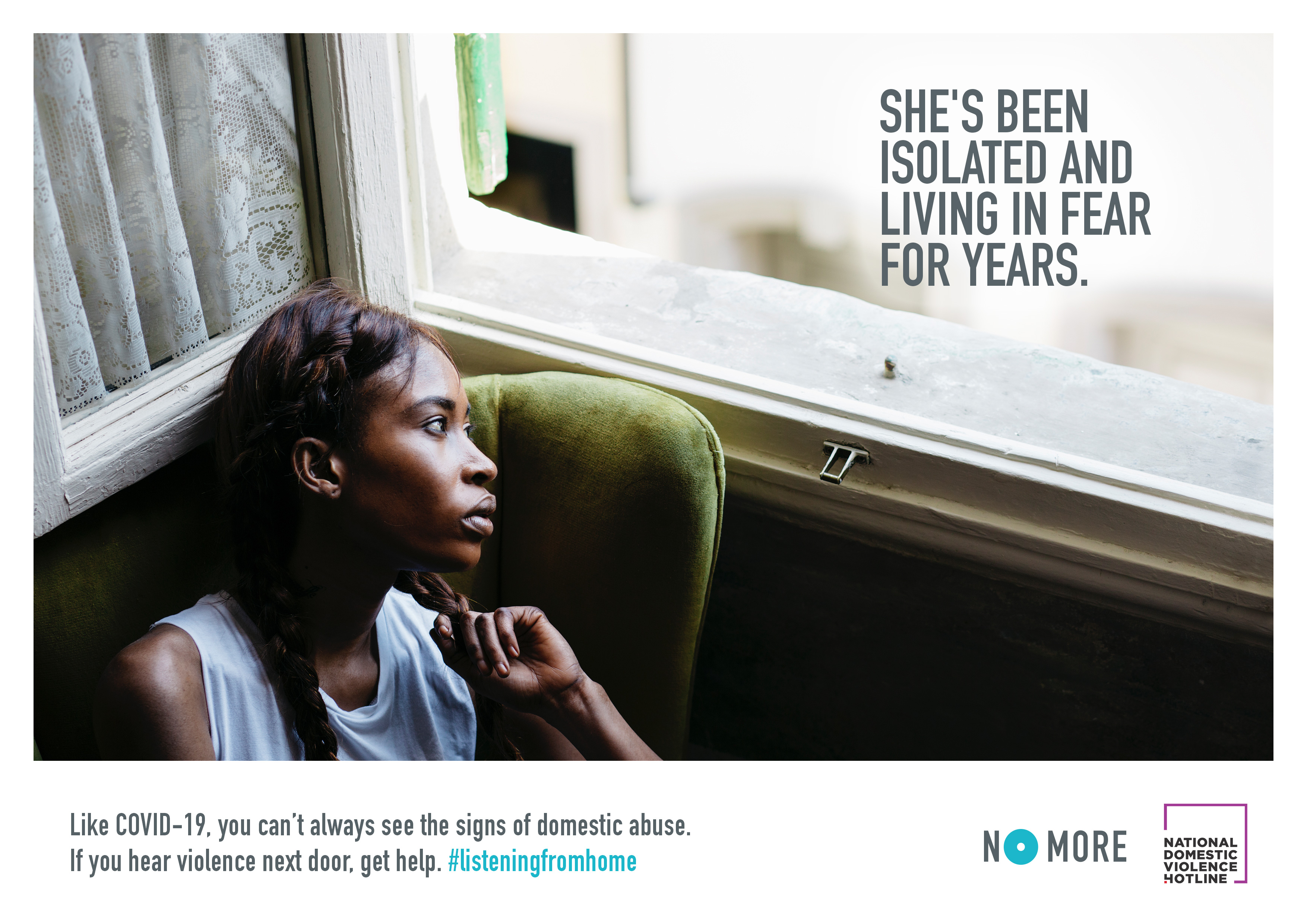 NO MORE Foundation and MRM UK