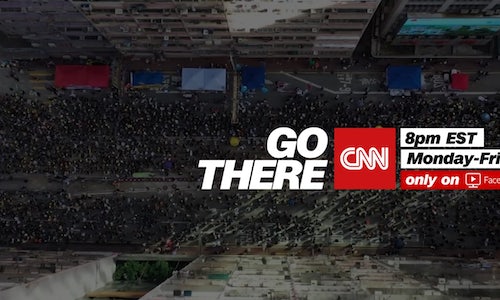 Our main objective was to build a community around CNN’s audiences on Facebook by engaging the next generation of news junkies. CNN is unmatched in global reach. Go There puts the audience at the center of the story and allows them to not only consume the news of the day but get context and color they can’t get anywhere else by allowing users to ask questions and come along in the reporting process.

“Go There” is a single topic daily news show using mobile-first storytelling to reach viewers everywhere and anywhere. It’s an innovation lab of sorts, allowing producers and reporters to experiment with different styles, formats and tools to engage the audience, all with mobile viewership front of mind. This storytelling is immersive and engaging. From war zones to refugee camps, prisons to protests, this content is made to bring viewers into the field with the reporter.

With exclusive images from the field, news making interviews and bold, captivating discussions, we drive meaningful social conversation to the Facebook audience. While covering a diverse range of stories, we discuss, interview and highlight the cultural, political and economic challenges impacting our lives. The seven to ten minute length of each episode allows time for the viewers to fully immerse in the stories and get to know the characters.

Go There has been a major success, exceeding any and all goals and objectives. Since premiering on Facebook in July 2019, Go There has averaged 2.7 million views per episode and has earned over 1 billion video views, with 1.2 billion minutes consumed. One episode from last January, featured CNN on the ground in Wuhan as the Covid-19 pandemic was first taking hold. It is now the most watched hard news video on Facebook, with 210 million views and growing. The show has proven the value of CNN’s global footprint with over 123 correspondents and contributors filing episodes from more than 55 countries around the world. This global reach is clearly visible through stories like, “Beirut in shock as deadly explosion adds to suffering from Covid-19 and economic crisis”, where CNN Correspondent Ben Wedeman reports from the wreckage of the CNN office in Beirut after a blast rocks the city. Ben and his team kept working after the explosion, analysing how this would impact hospitals already overwhelmed by Covid-19. Go There was able to bring viewers directly into this moment, to help show the gravity of the situation to the world. Go There also went live in vital times like these, streaming to viewers what was happening on the ground during the George Floyd Protests and covering other events like Anti-Stay-At-Home Order Rallies. The success of GoThere proves that viewers today want content that takes them directly into the story.