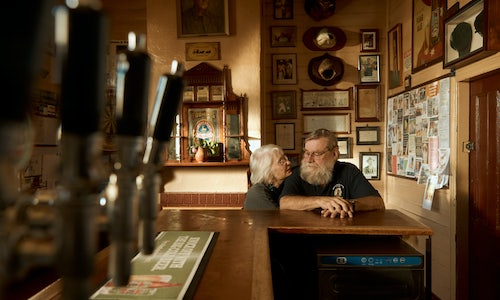 Australians love Airbnb, and on various measures Australia is regarded as the most penetrated market globally for the brand. 30% of Australian adults have an Airbnb account. With 86% brand awareness, world-leading addressable market penetration, clear short-term rental regulations covering more than 70% of the population, Australia is a strong and important market.

However, due to ongoing and ever increasing domestic competition, an uplift in brand was required. Airbnb in Australia had low unaided awareness (22%) and positive sentiment (59%) when compared with major competitor booking.com (39% and 79% respectively). From a business perspective, The Country Pub Project was developed to drive both metrics.

In order to do so, Airbnb needed to capture the Australian market and showcase the brand as more than just an accomodation site—instead, positioning itself as part of the local community.

To build advocacy and reignite conversation around the brand, Airbnb aimed to leverage the renewed interest in domestic travel to drive a +5pt increase in unaided awareness, and +2pt increase in favourability across the country (focusing on regional areas where supply and brand affinity weren’t as strong).

The initial campaign period of three months was also the timeframe Airbnb set out for achieving reaccelerated growth of the brand. As such, The Country Pub Project was rolled out as an integrated campaign, distributed via mass media with high reach. Clear campaign objectives were put in place:

Domestic travel is on the rise in Australia. However, major cities and coastal towns attract more visitors than rural areas. Despite this, Airbnb research found that 70% of the population would like to see more of ‘the real Australia’, with a further two thirds suggesting they would like to visit the country for their next holiday.

While there is an increased interest in small town Australia, local communities are finding it difficult to capture this new high value traveller who stop by but rarely stay the night.

Country pubs, in particular, are struggling to entice overnight guests. Hit hard with droughts, fires and depopulation, not many establishments can afford to invest in attracting new travellers. In fact, only 14% of Australians have spent a night in a regional pub in the previous 12 months.

By speaking to local communities, Airbnb discovered the true value of a country pub. It often serves as a post office, town hall, corner store and gas station. A country pub is the heart of the community it serves—so when the pub struggles, the town does too.

Armed with cultural insight and regional context alongside an emerging category of holidaymakers, Airbnb saw a unique opportunity. By supporting local pubs to attract new visitors, Airbnb could put the spotlight back on country towns and support regional communities, while also meeting its own business objectives.

·       Drive awareness amongst regional Australians of the benefits of hosting with Airbnb.

·       Reawaken Australia’s love of country pubs, and the unique experiences on offer.

·       Position Airbnb as a sustainable, authentic travel company that champions the needs of everyday Australians and local governments.

A massive undertaking with many moving parts and multiple distinct target audiences, The Country Pub Project required a phased roll-out.

Airbnb asked Australians to nominate their favourite country pub or publican in need of a helping hand. To be eligible, pubs had to have an accommodation offering.

Six pubs across Australia were chosen as recipients of a $50,000 grant, along with a team of design professionals who partnered with the community and publicans to restore the pub to its former glory (utilising all local businesses). Airbnb Superhosts helped publicans to publish eye-catching listings on the brand’s platform, connecting rural communities to the global Airbnb community of millions.

A nationwide integrated campaign encouraged Australians to venture past their local pub and find their ‘not so local’ instead. Each channel effectively captured the nuance of pub, town and community, allowing Airbnb to turn Australia’s tyranny of distance into the campaign’s biggest drawcard.

At all stages, Airbnb partnered with regional communities to ensure The Country Pub Project came to life as a sustainable tourism initiative, with scope to continue boosting local economies well beyond the initial campaign period.

Organic buzz surrounded the entirety of the campaign, generating 325 pieces of earned media across national television, newspapers and lifestyle magazine.

Phase One saw an overwhelming response of 9000 country pub nominations, with people across the country sharing heartwarming stories about their favourite pubs and publicans.

Video and visual content had an organic reach of 15.2m, with 31m total video views and an outpouring of positive sentiment across social channels. People who visited the pubs returned with rave reviews, while others planned future trips and publicly shared their support for Airbnb’s advocacy.

A new category of listings featuring 50 country pubs was heroed on the homepage of Airbnb’s global platform—and due to the overwhelming success of the campaign and Airbnb’s  commitment to continue onboarding country pubs, this category grows bigger every day.

Most importantly, the The Country Pub Project proved itself a sustainable tourism initiative that continues to boost the economy of towns that need it most. Publicans have earned +30% revenue and experienced +300% occupancy, and the increase in patronage has had a positive ripple effect on other businesses in each regional community.

Video for The Country Pub Project 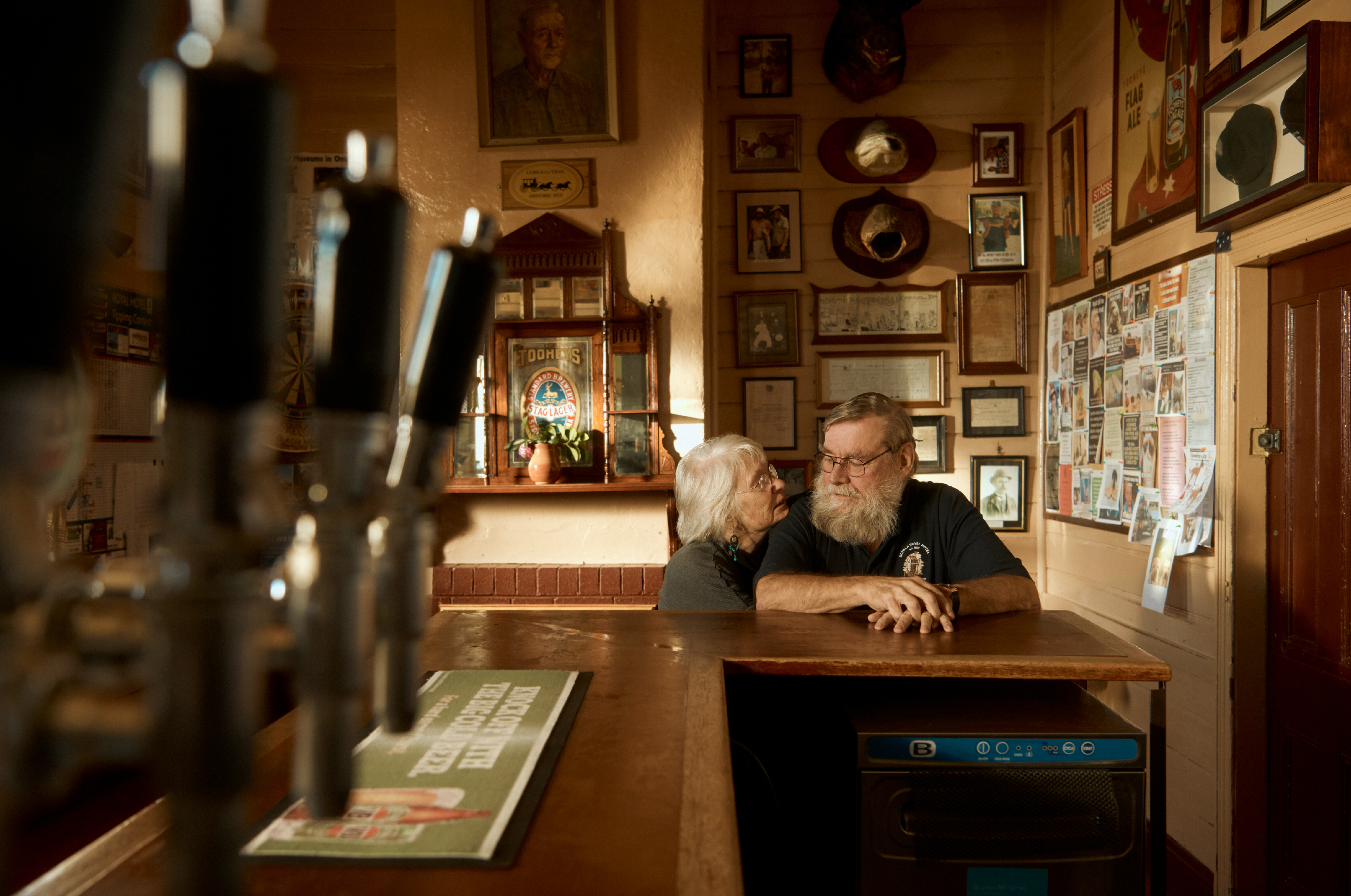 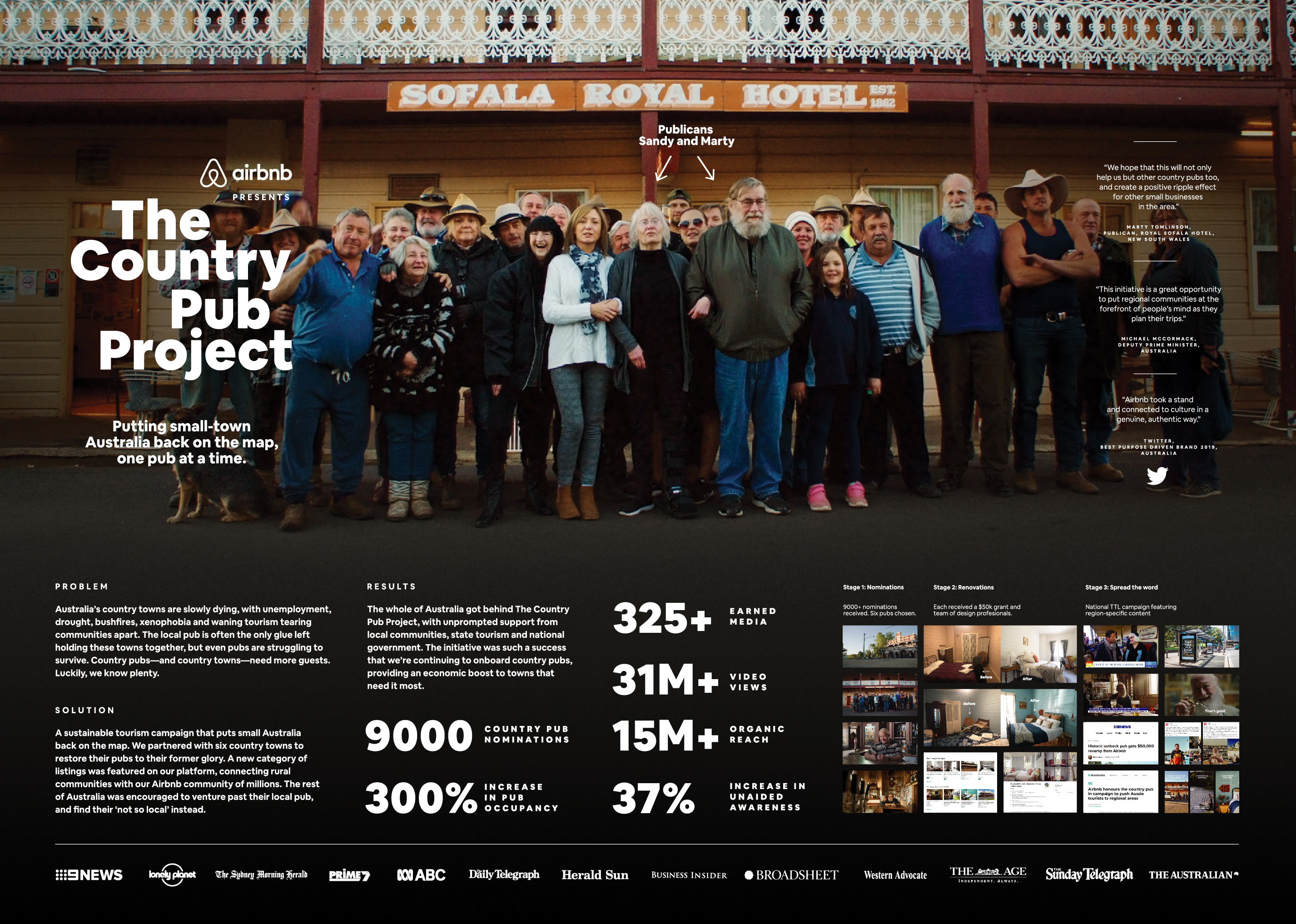 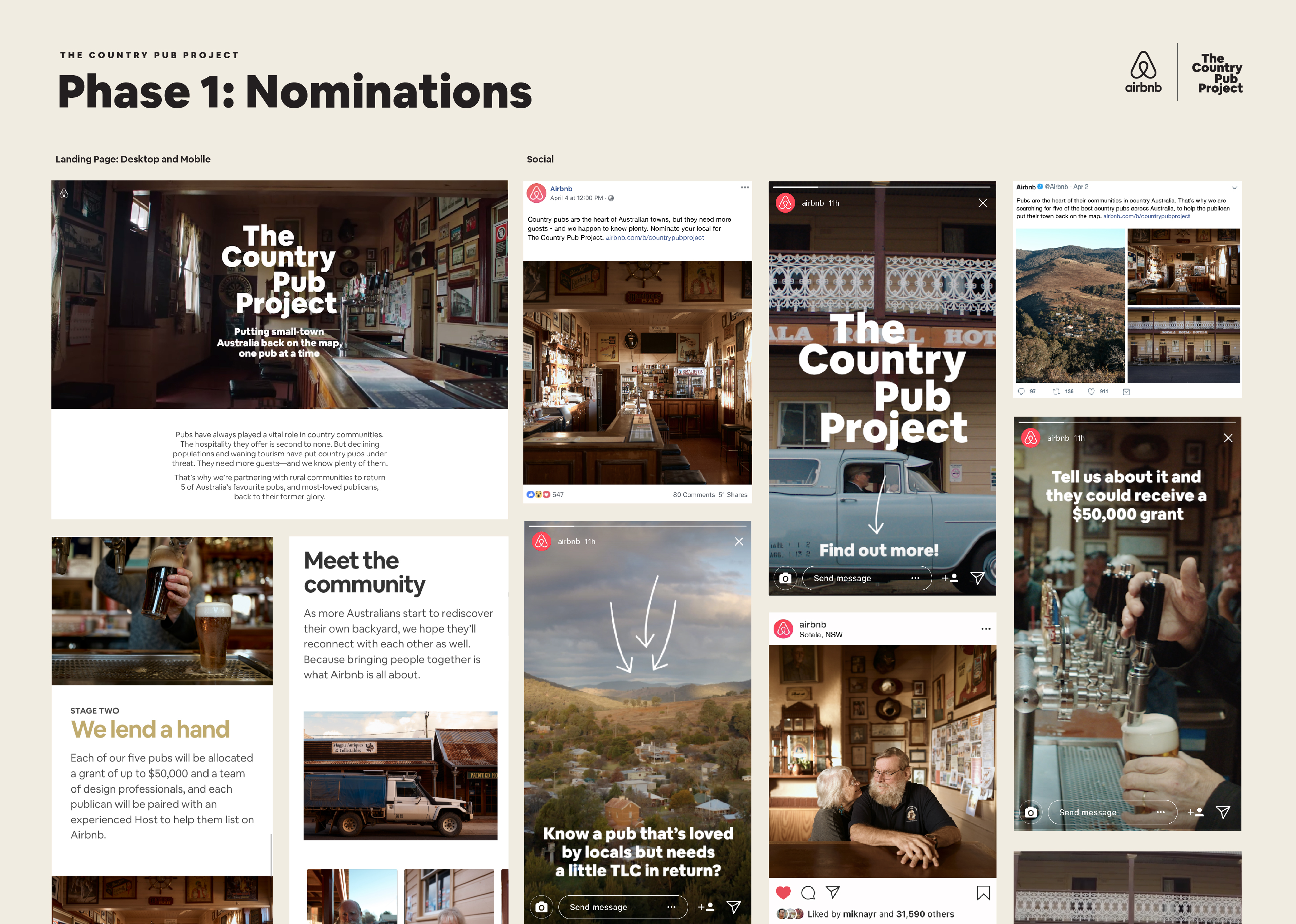 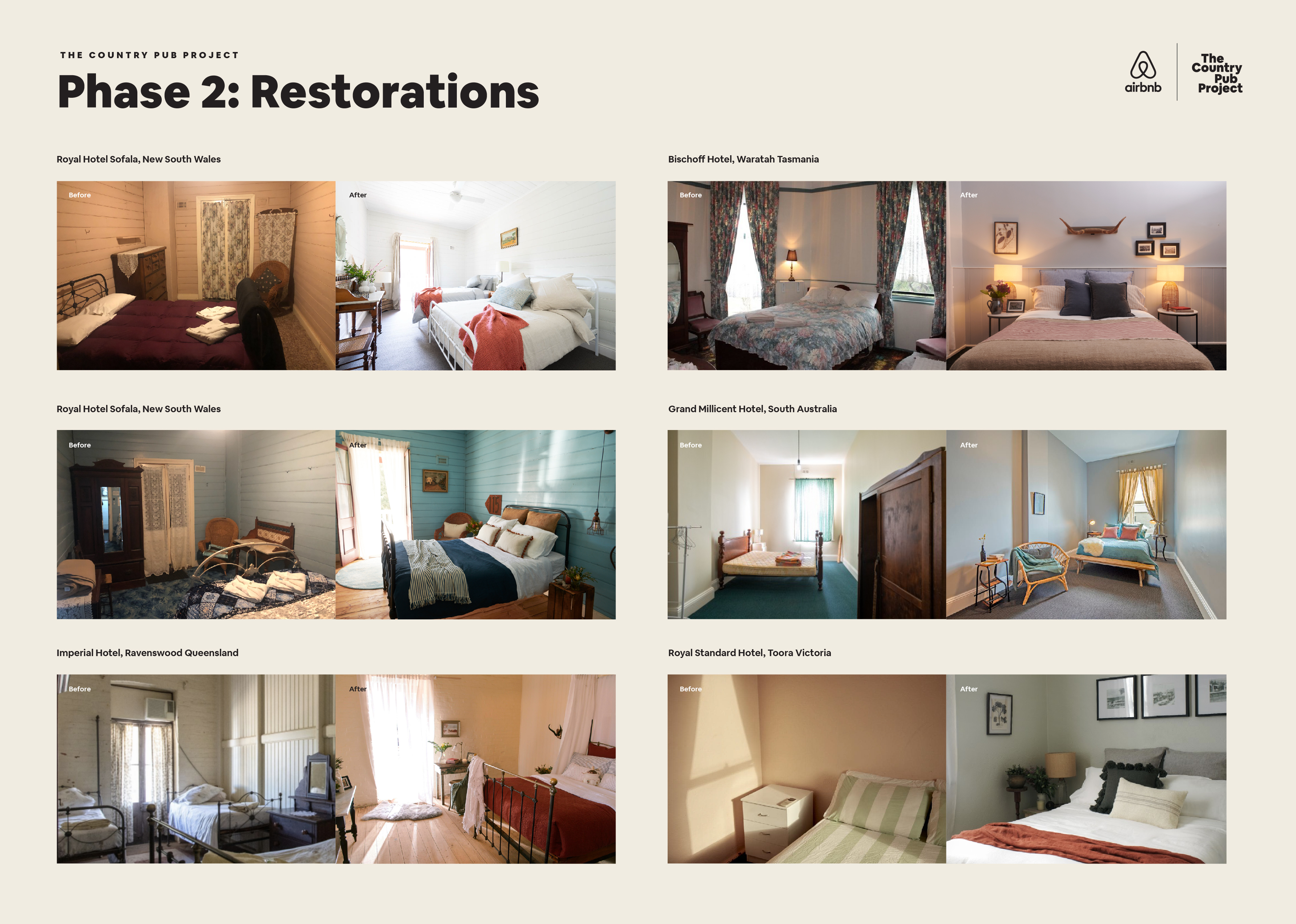 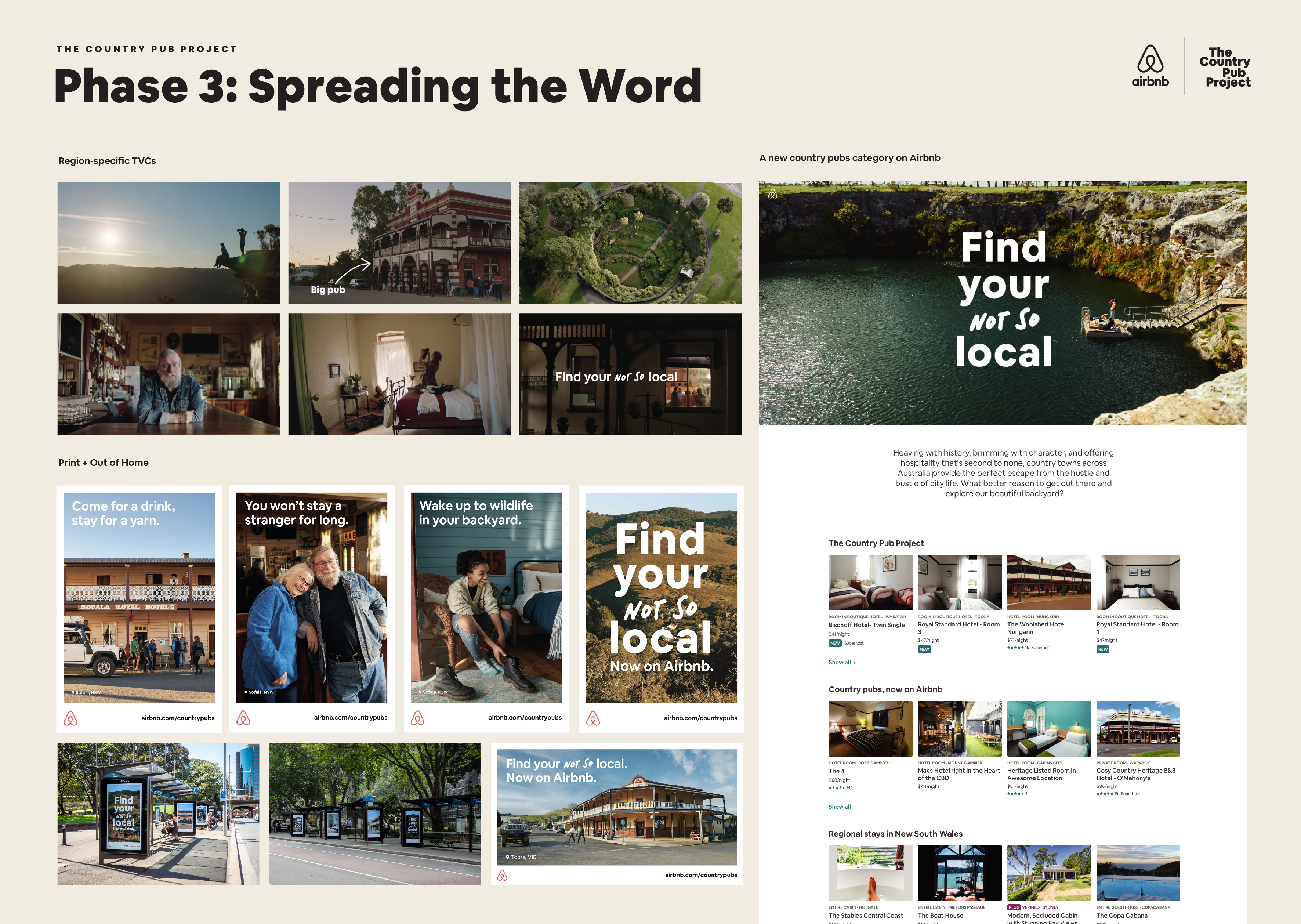 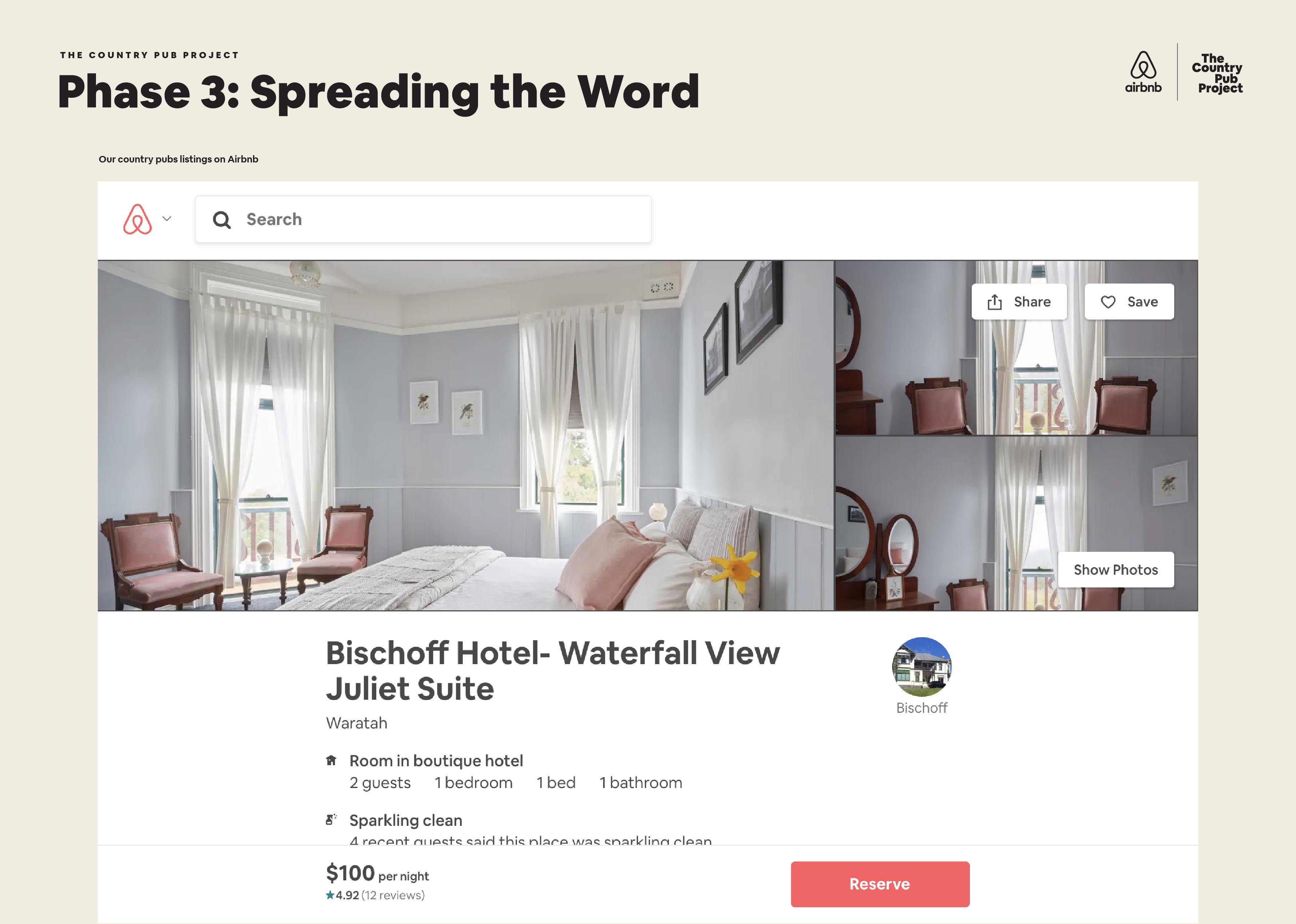 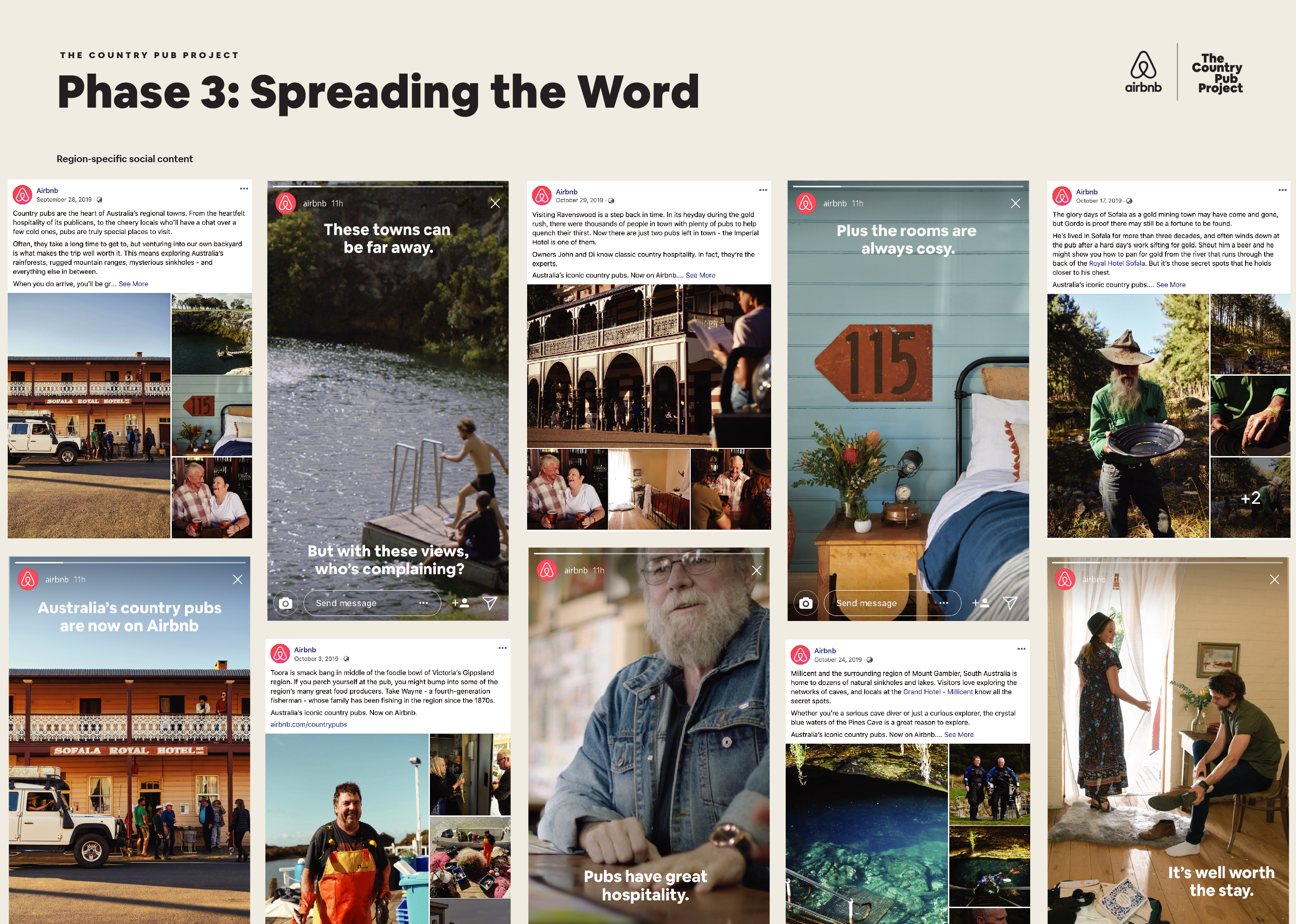 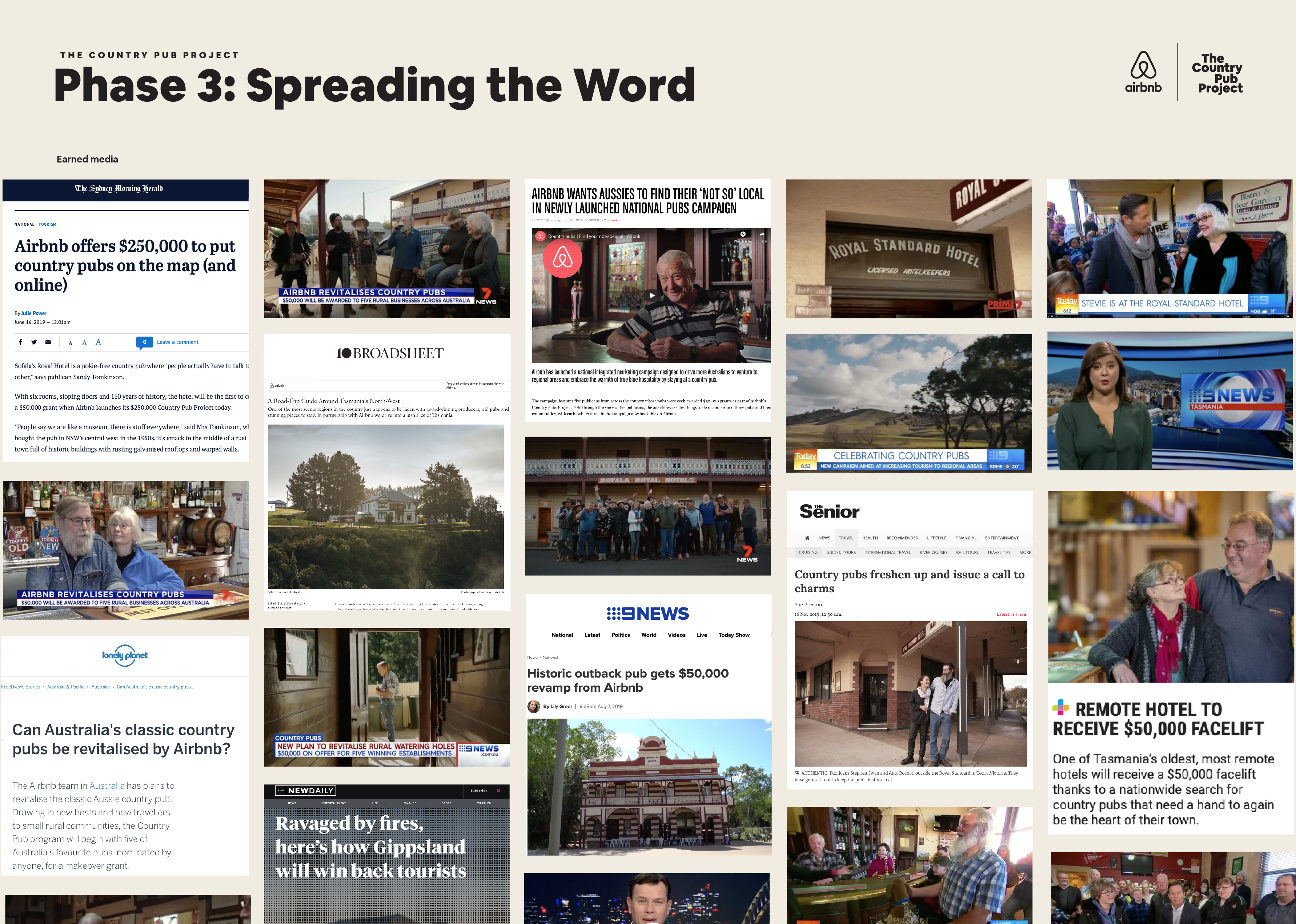