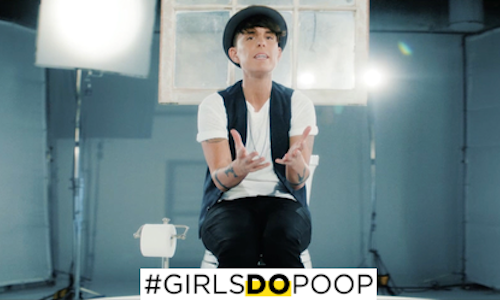 It's society's dupe that girls don't poop. After all, it's only natural...

Five years ago Poo~Pourri swung open the (stall) door and broke the barrier of talking crap with a viral video "Girls Don't Poop." In October 2018, we took a shift. A big shift. It was time to dump the shame and fully embrace that #GIRLSDOPOOP.

With this campaign, we wanted to encourage women to stop holding it in through a motivational spoken word performed by Andrea Gibson and open up the dialog amongst women to let that sh*t out with hysterical real-life poop stories - because you, we, us girls do poop.

The goal of this campaign was to break taboos, and to inspire women to let it out with their honest, funny, hilarious, crazy, unbelievable, liberating poop stories. After all Poo~Pourri is here to trap odors, not shame you of doing what's only natural.

Our campaign was multi-faceted and supported in four EPIC ways.

We had an outpour of comments and shares on Instagram and Facebook, see below for some of our favorite real customer stories.

Within an hour of meeting my now husband I belched and farted. He was shocked and happy and asked me out right there. Men want us to be natural. – Charlotte, Facebook

I almost crapped on myself in high school because the fear of pooping in high school. That changed my whole mindset around because I refuse to have an accident like a child because people don't think its proper for women to do what's natural. If I need to go I'm gonna go. Hell I might even announce it to some people. – Amanda L., Facebook

I lived with my ex for 2 years. Didn't fart or poop with him in the house those entire 2 years. I'd wait for him to leave for work first. My husband pooped with the door open when we were dating (within a couple of weeks, mind you). His extreme comfort and bluntness about it all, got me over my fear. It only took 22 years, but he was the man to do it! Now there's no 'embarrassing' topics we don't talk about – Samantha, Facebook

Video for Girls Do Poop