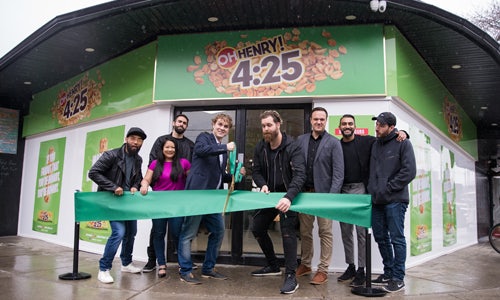 Oh Henry! is Canada's #1 chocolate bar for hunger, but millennials are still more likely to think of Snickers when they get hungry. In fact, majority of Oh Henry! consumers are 45+.

We were tasked with strengthening Oh Henry!'s leadership position. The brand needed a way to win the attention and the affection of a younger generation of hunger bar buyers. This meant creating a campaign that would go way beyond the clutter of standard candy bar advertising.

Cutting through the clutter meant driving buzz among our target demo and making a connection that would encourage high engagement and sales.

Traditional approaches yield traditional results. So instead, we threw convention out the window and drew upon the collective power of media innovation, social influencer strategy, PR and creativity to execute a brilliant, audacious, never-been-done-before idea.

With the legalization of cannabis in Canada quickly approaching, we saw a massive opportunity for Oh Henry! to build rapport with millennials – who over index on cannabis consumption by 65% – and authentically align Oh Henry! with the cannabis conversation.

With more millennials on track to enjoy cannabis than ever before, more of them would also be hungrier in the minutes following "4:20". Because when people get high, people get hungry.

In order to solve their relevancy problem among the younger demographic, Oh Henry! needed to tap into the millennial market & own a relevant hunger moment. We used this once-in-a-lifetime, cultural phenomenon to draw attention to Oh Henry! and reinforce the brand's position as Canada's Hunger Bar.

Oh Henry! created a brand new bar- the Oh Henry! 4:25. With more peanuts than ever, the new bar was specially formulated to satisfy the intense hunger that hits 5 minutes after 4:20.

With a national campaign aimed squarely at recreational cannabis users, a conveniently timed appearance at Toronto's Weed March, supported by OLV and a social strategy that had people talking.

Leveraging "That one friend" meme, we engaged in relevant conversations around moments when we get the munchies while hanging out with friends. We forged a unique relationship with stoner food legends, Canadian YouTube channel Epic Meal Time, to showcase a larger-than-life Oh Henry! 4:25 bar. Epic Meal Time's tone, along with their EPIC food-themed channel aligned with the hunger-moment, and their audience over indexed among our target millennial – and 4:20 enthusiasts – demo.

Epic Meal Time's GIANT 100lb Oh Henry! 4:25 bar debuted at the opening of the Oh Henry! 4:25 dispensary in Kensington Market on April 25, 2018 (4/25) at 4:25pm, steps away from actual marijuana dispensaries. To launch the bar ahead of its national rollout, we gave our audience the chance to sample Oh Henry! 4:25 bars at the branded dispensary. Its final day was aligned to the Marijuana March, the first year in Canada where the march was a celebration as opposed to a protest.

We supported the roll out of 1MM bars across the country through an integrated national campaign. To reach our core millennial audience, the leaders in cord cutting, we drove a digital-only approach amplifying Epic Meal Time and brand content across Facebook, Instagram and OLV. Paid media went live the morning after the passing of Canada's new 'pot law', Bill C-45, in parliament on April 13, when conversations and enthusiasm around legal recreational cannabis were at their peak, driving extensive national media coverage.

The Oh Henry! 4:25 Hunger Bar campaign was an overwhelming success, helping the brand find its way into the hearts and hands of Canadian millennials. The campaign drove massive lifts in awareness and purchase intent and delivered outstanding business results. Oh Henry! not only successfully defended its position, but stole market share from arch rivals, Snickers and Mars, boosting Oh Henry! family share +8% vs. previous year.

Oh Henry! 4:25 bars sold out across Canada before the campaign was done, with bars going on eBay for as much as 5x retail price. In fact, the campaign drove growth amongst ALL Oh Henry! single bars, with no cannibalization during the in-market period.

The campaign garnered 69+MM earned media impressions across both traditional and cannabis-oriented publications and nearly 16.5MM video views, demonstrating phenomenal engagement given there are only 10MM millennials in Canada.

A testament to the power of creative collaboration, the campaign sparked millennials' attention and successfully launched the most exciting candy bar of the year, pulling off a stunning North American first and laying the groundwork for future growth. 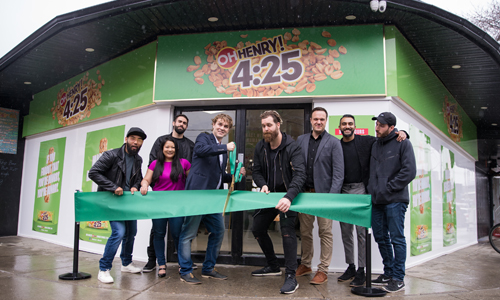