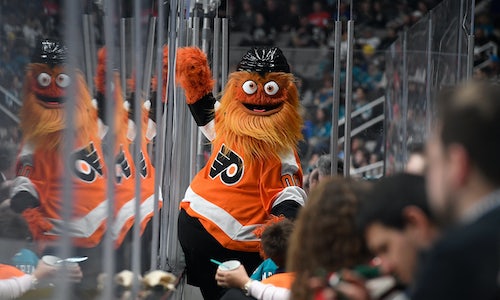 In the summer of 2018, The Philadelphia Flyers were tasked with the creation, introduction and implementation of a brand new team mascot to begin in the 2018-19 season. Thinking long term, the marketing team sought to develop a complete mascot program as a tool to increase awareness and scope of the overall Flyers brand and fan base. The mascot, who's name "Gritty" was intentionally given as a way to reflect the culture of the sports city in which he would reside, would need to appeal to both young fans and long-tenured season-ticket members and be utilized to expand the organization's community relations, fan development, game presentation, and marketing efforts.

In addition to becoming a fixture at every Flyers home game and welcome guest of honor at off-ice events, the Flyers included building a prominent online and social presence as a main objective of Gritty's introduction. This online presence would be the avenue to tie a distinct voice to a comically lovable and whimsical creature.

Looking specifically to Gritty's launch day, management within the organization presented one elusive goal to the marketing team: make a splash. The landscape in which Gritty was going to be inserted included four other professional mascots, one of whom was introduced just two weeks prior to the set date of Gritty's debut and one of sport's most iconic, the Phillie Phanatic. Simply put, Gritty needed to stand out.

The consequential social media rollout of @GrittyNHL on Twitter and Instagram utilized unique and innovative content pieces and strategies. Unlike any other mascot in the professional sports realm, Gritty utilized his social platforms to sway mass public opinion from bad to good in less than 24 hours. Quick to defend and also admit both defeat and triumph, Gritty's use of self-aware and honest commentary and bold pop-culture-relevant content on his first day of existence stands far and outside the normal social platform rollout for new team personalities, as well as team mascots.

Looking strictly at Gritty's day one efforts, under heavy fire from both Flyers fans and others shocked by his orange, googly-eyed appearance, "Team Gritty" decided the best chance of swaying opinion was to defend what was rightfully his and embrace the pre-existing Flyers rivalries. After receiving a simple "lol ok" mention from the Pittsburgh Penguins on Twitter, the group quickly clapped back saying "sleep with one eye open tonight, bird." along with accompanying gif. This tweet brought the Flyers fans to their feet, believing Gritty was officially one of their own.

The first day also presented an opportunity for honesty and relatability. Appearing at his first Flyers pre-season game, Gritty slipped and fell during an on-ice t-shirt toss, instantly accelerating the conversation about the mascot's first day on the job. Gritty posted a clip of the fall and openly admitted "First days are hard" and asked, "Why didn't anybody tell me the ice is this slippery?" Realizing the public opinion was quickly becoming positive and became a top trend on Twitter and Google, Team Gritty decided to capitalize and create their own version of one of the most iconic viral images. A photoshopped version of Kim Kardashian's champagne-pouring Paper Magazine cover was created with Gritty and a Gatorade water bottle, paired with the caption "Goodnight, internet." and officially, the monster had become a sensation.

Beyond Gritty's first day moments, his content across his accounts has lifted the curtain on mascot culture with the help of high-quality, meme-style imagery and witty annotations on Gritty's most pivotal life moments. This includes his self-nomination for TIME Magazine's Person of the Year and one-month "birthday" photo shoot, complete with letter board and dreamy editing.

In addition to Gritty's stand-alone content, engaging with other accounts and highlighting in-the-moment happenings has shown levels of the mascot's protective, sassy and unpredictable personality. This includes direct replies to fans, his mascot frenemies, and special "firsts" like meeting Flyers Captain Claude Giroux and experiencing snow.

This voice and tone has carried outside of Gritty's social presence, and is highlighted in numerous national publications and "one-on-one" interviews.

The development, creative strategy, launch, execution, and brand of Gritty is now being called one of the greatest mascot launches in all of sports history. In total, the first 30 days since the mascot's launch garnered an overall national TV audience of 69,137,524 and a local audience of 16,019,949 in the Philadelphia region. In terms of publicity value, the launch generated $10,599,082.00 in earned media value. Additionally, total online news visitors totaled at 4,770,619,652, generating $151,394,443 in online publicity value. Again, these figures only reflect Gritty's first 30 days.

Since his inception, Gritty has appeared or been featured on: 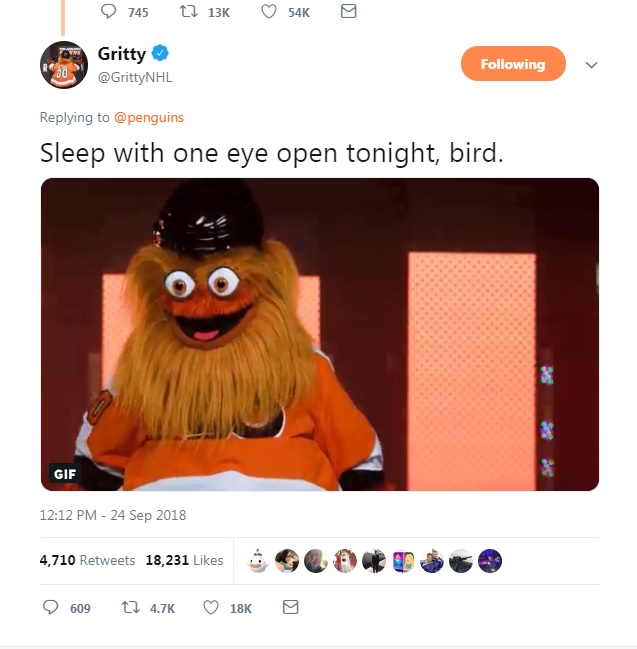 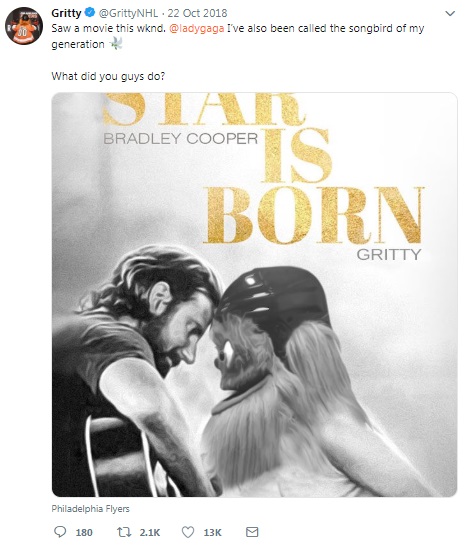 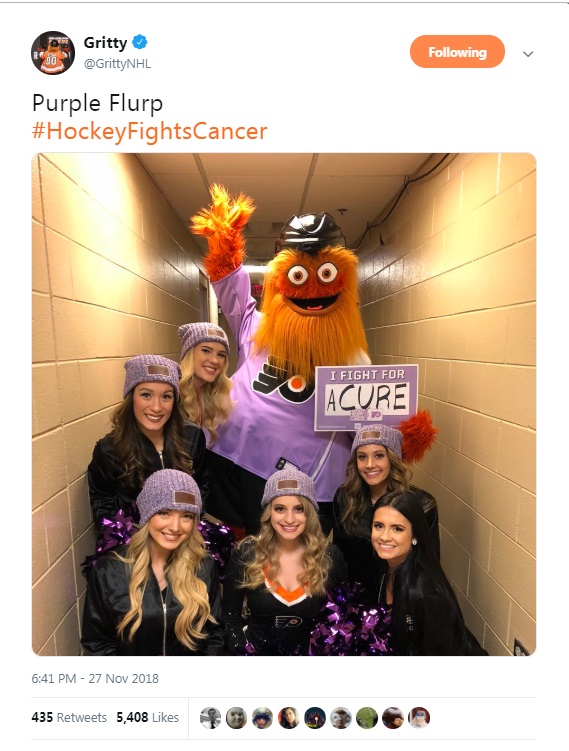 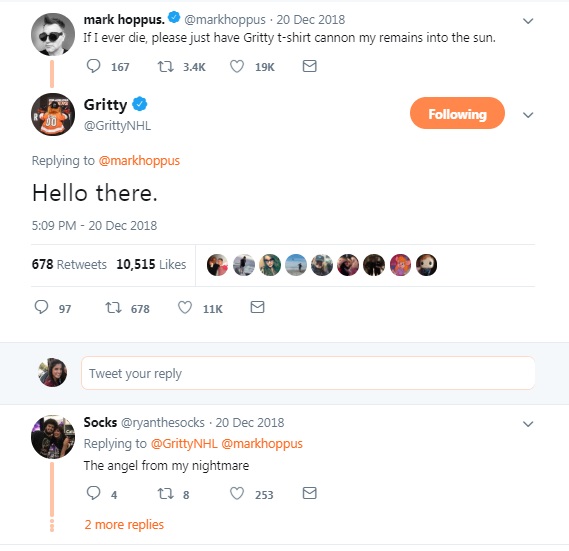 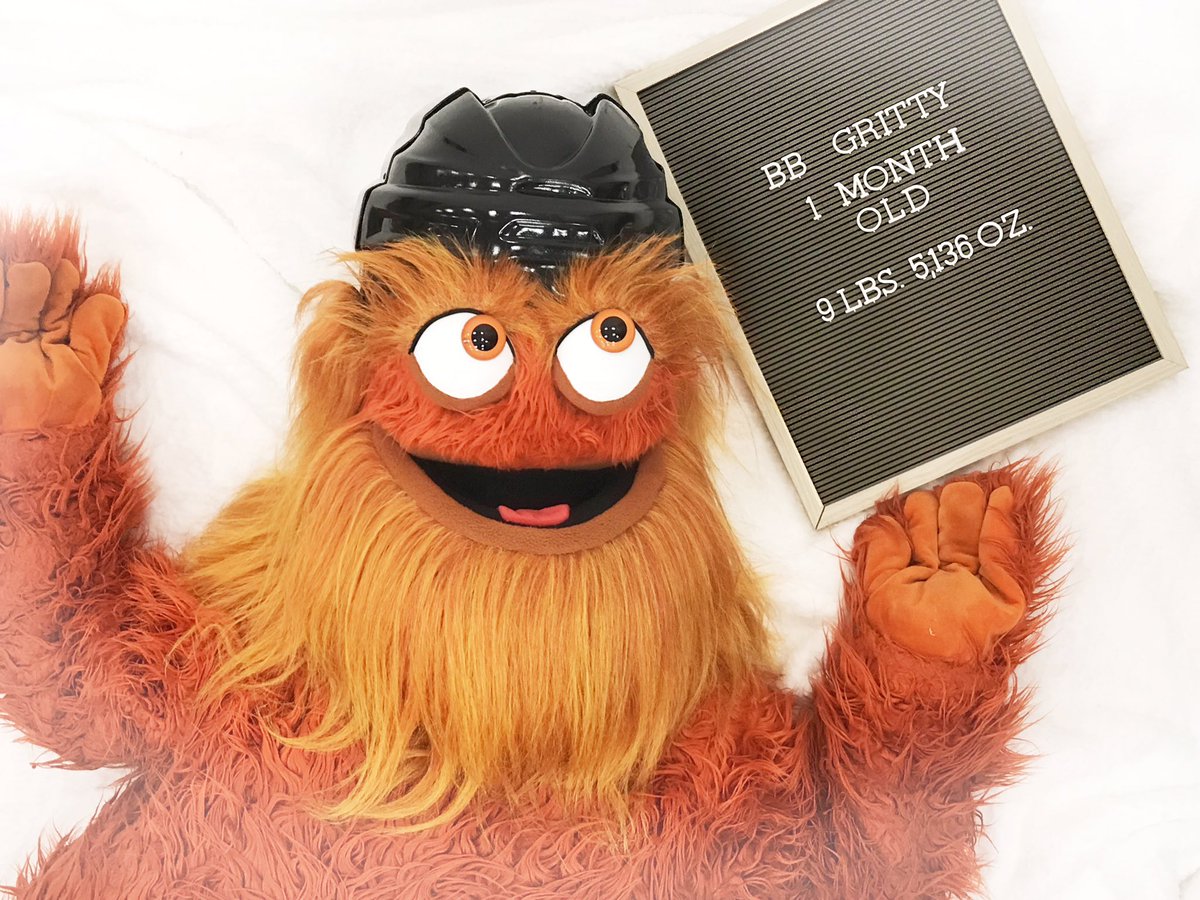 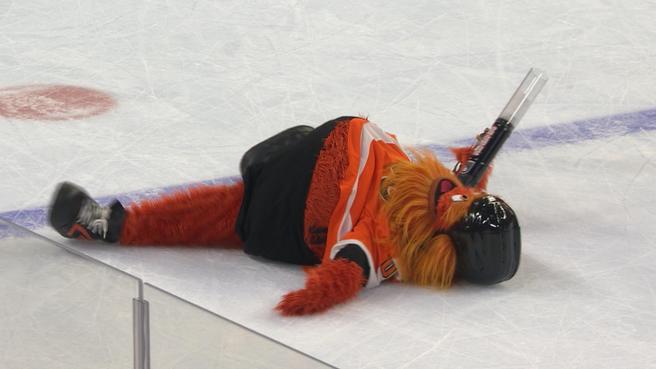 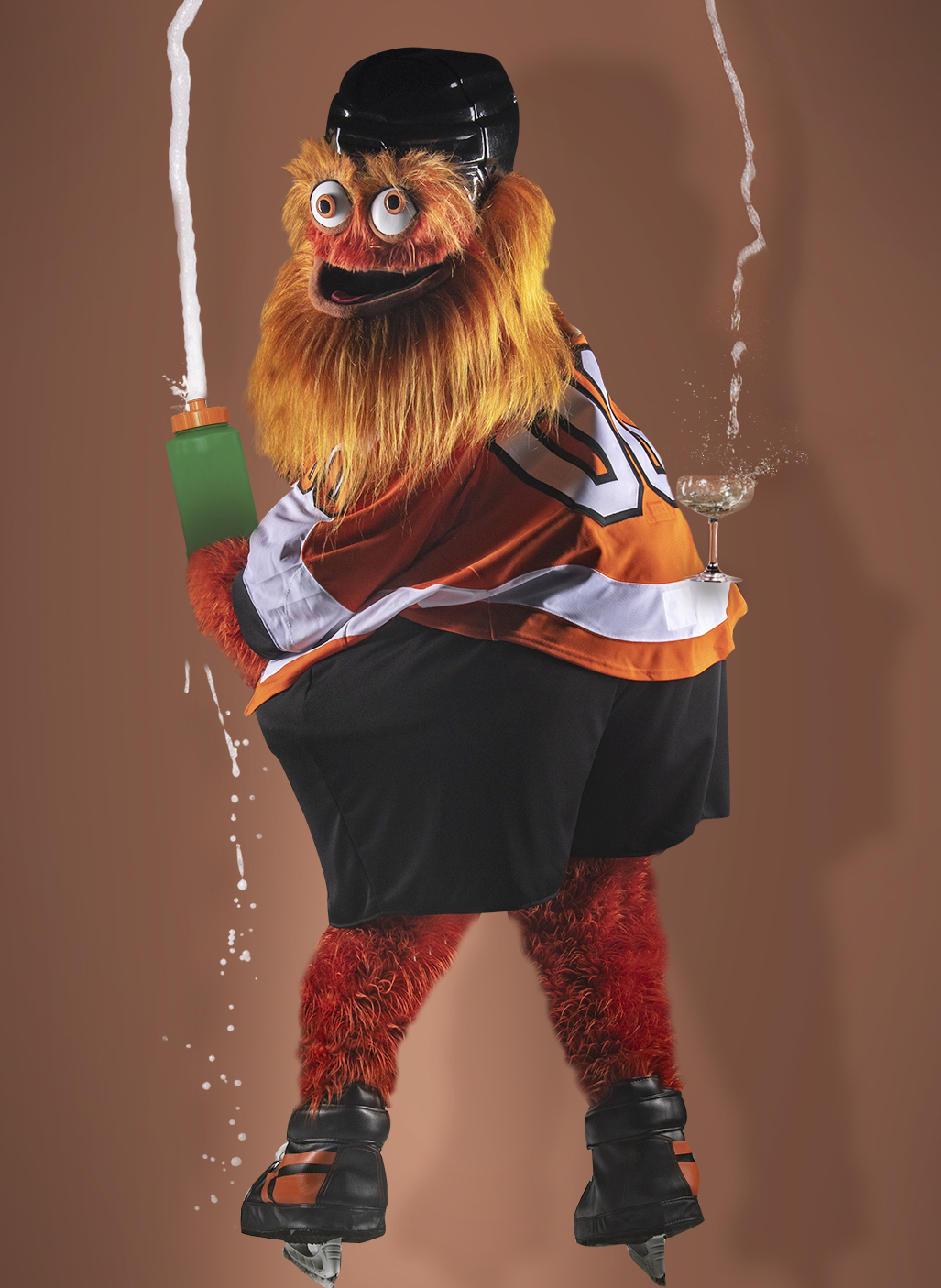 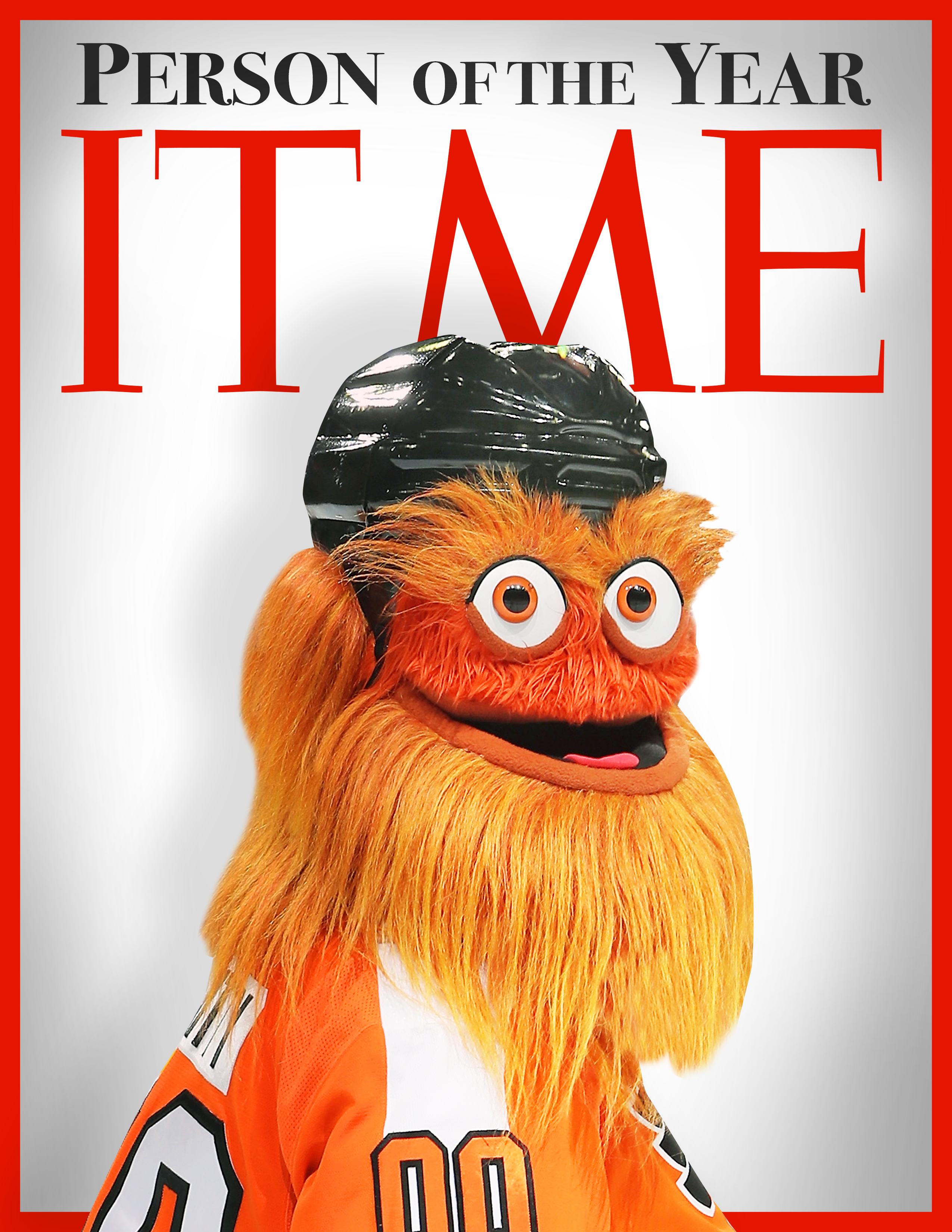