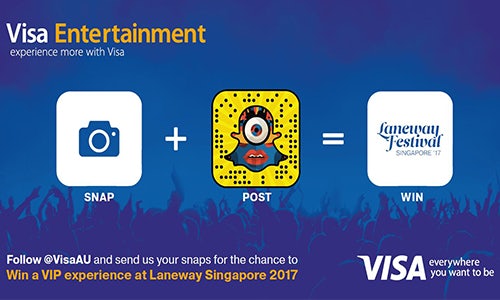 Helping Visa get backstage, and front of stage at Laneway Festival

Visa's brand equity has traditionally under-indexed amongst millennials and has an objective to get millennials to stop thinking of cash as their preferred way to pay.

In order to combat this mind-set, Visa partnered with Laneway Festival – an environment where millennials are highly receptive and cash is their preferred way to pay, and launched our most successful social campaign to date.

The brief could have easily been a traditional sponsorship campaign, but instead Visa saw an exciting opportunity to deliver a socially engaging concept.

The campaign had dual aims of raising awareness of Visa amongst the millennial target audience and evolving the perception of Visa as a global leader of innovative payment solutions. Specifically in the area of Visa payWave, Visa could showcase their recent innovation, wearable Visa payWave wristbands.

At its core this was a strategy which allowed brand, product event and media to sing as one.

St. Jerome's Laneway Festival (Laneway) began as a series of weekly shows in a tiny Melbourne bar and has now bloomed into one of Australia's favourite festivals. Today, Laneway continues to remain true to the original set of values upon which it was founded: championing community, fostering collaboration, encouraging self-expression and finding ongoing excuses to have fun[1].

Visa began a partnership with the Laneway Festival in 2013. Every year it has been important that Visa leveraged this sponsorship in a way that benefited their brand most effectively and allowed them to stand out against a sea of youth brand sponsors who choose to shout rather than open up a dialogue.

With over 100 million daily users, Snapchat was the clear choice of platform for starting a dialogue with millennials, and the nature of Laneway Festival being a visually and audibly engaging environment meant that it was a natural platform and media fit for the content Visa was promoting and seeking from followers.


The numbers behind Snapchat were clear:

-Snapchatters watch over 10 billion videos per day, which is more than a 350% increase in the last year alone[2];

-In Australia, Snapchat is the third most used social platform amongst 18-29 year olds (behind Facebook and Instagram) with 38% usage[3];

How we used Snapchat

Visa began by launching their very own Snapchat handle, @VisaAU. The campaign began on Facebook, with an initial post designed to raise awareness of the upcoming festival and direct Visa's existing Facebook followers towards the new channel on Snapchat. The post was accompanied by a visual of Visa's custom designed Snapcode, which allowed Facebook followers to scan their screen and add Visa directly.

At the Laneway Festivals Visa continued their presence. The winners from the first phase of the promotion were rewarded with exclusive backstage access and artist meet and greets which allowed them to generate incredible content which was pushed out across Visa's channels.

The second phase of the campaign involved festival goers sending Snaps of their Laneway experience to VisaAU for the chance to win Visa payWave prizes including Visa wearable pay bands and the major prize of a trip to Laneway in Singapore.

The campaign was a huge success and has since set the bench mark at Visa Australia for how to run a youth targeting awareness campaign, but don't just take our word for it.

Millennials were engaged with our campaign

The campaign exceeded these objectives with the VisaAU Snapchat channel accumulating 1,772 followers[1], 2,295 competition entries[2] and 55,305 Snapchat views during the campaign period.

Post campaign brand tracking showed that 45% of millennials who attended Laneway Festival agreed or strongly agreed with the statement that 'Visa is an innovative brand'[3]. Thanks to activities such as Laneway, Visa brand equity amongst 18 to 24 year olds has improved by 8 points to overtake MasterCard and PayPal.[4]

Video for Helping Visa get backstage, and front of stage at Laneway Festival 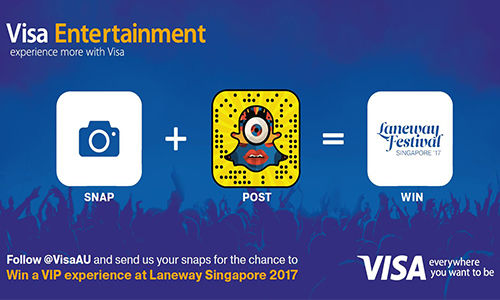