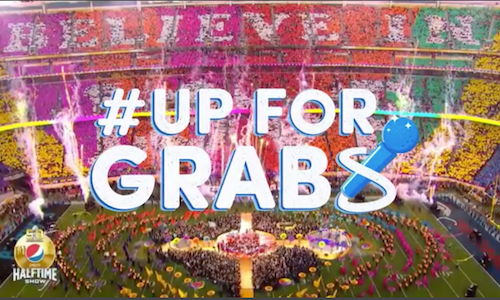 As the official sponsor of the Super Bowl 50 Halftime Show, Pepsi was set to pull out all the stops for an epic performance. Our immediate goal was to drive mass social engagement during Halftime - and ultimately, we wanted consumers to associate the Super Bowl Halftime Show with Pepsi. Breaking through the social chatter during the Super Bowl has become increasingly difficult for brands, so we had to build a program that would encourage massive user participation without a high barrier to entry. We developed a program that invited fans to participate in the show itself. Pepsi would give fans on social media the chance to win items from Pepsi Super Bowl Halftime Show in real time. This year, #PepsiHalftime was #UpForGrabs.

#UpForGrabs gave fans a chance to win actual items that appeared on stage during the Pepsi Super Bowl Halftime Show, timed to coincide with their appearance on TV. We also gave away items from the Pepsi Super Bowl Halftime lead-in TVC featuring Janelle Monae. During the live show, we posted photos of the items that were #UpForGrabs in real time to Pepsi's social media accounts. To enter, fans simply had to RT, like or "heart" (on Twitter, Facebook and/or Instagram, respectively) the Pepsi post featuring the item they wanted that was #UpForGrabs. Fans were able to enter across all social media channels up until midnight, at which point all RTs, likes and "hearts" were exported for prize fulfillment.

Throughout the night, we added all #UpForGrabs posts to the #PepsiHalftime "Promoted Moment" on Twitter, where fans were able to see all the items Pepsi was giving away, even if they missed it in real time. We also secured promotional social support from talent - including Janelle Monae, Madonna and Coldplay.

In the days leading up to the Super Bowl, we promoted the contest with a series of social posts and a promotional videos starring Donald Faison, who had been featured in Pepsi's pre-Super Bowl "Camp Halftime" content series, to get fans involved in the Halftime excitement.

#UpForGrabs was a huge success, generating 13.8M impressions and resulting in 143,125 entries in less than 4 hours (an average of 681.5 entries per minute). As a result, Pepsi had the second largest social share of voice among all brands during the Super Bowl (second only to E-trade who was giving away $1M). On Twitter, engagement increased significantly from Super Bowl 2015. Pepsi tweet engagements increased by 112% and impressions increased by 474%. Additionally, we saw #PepsiHalftime mentions increase by 1,287% - suggesting a growing association Pepsi and the Halftime Show. This success contributed to the brands 93% positive social sentiment versus 86% for all Super Bowl advertisers. 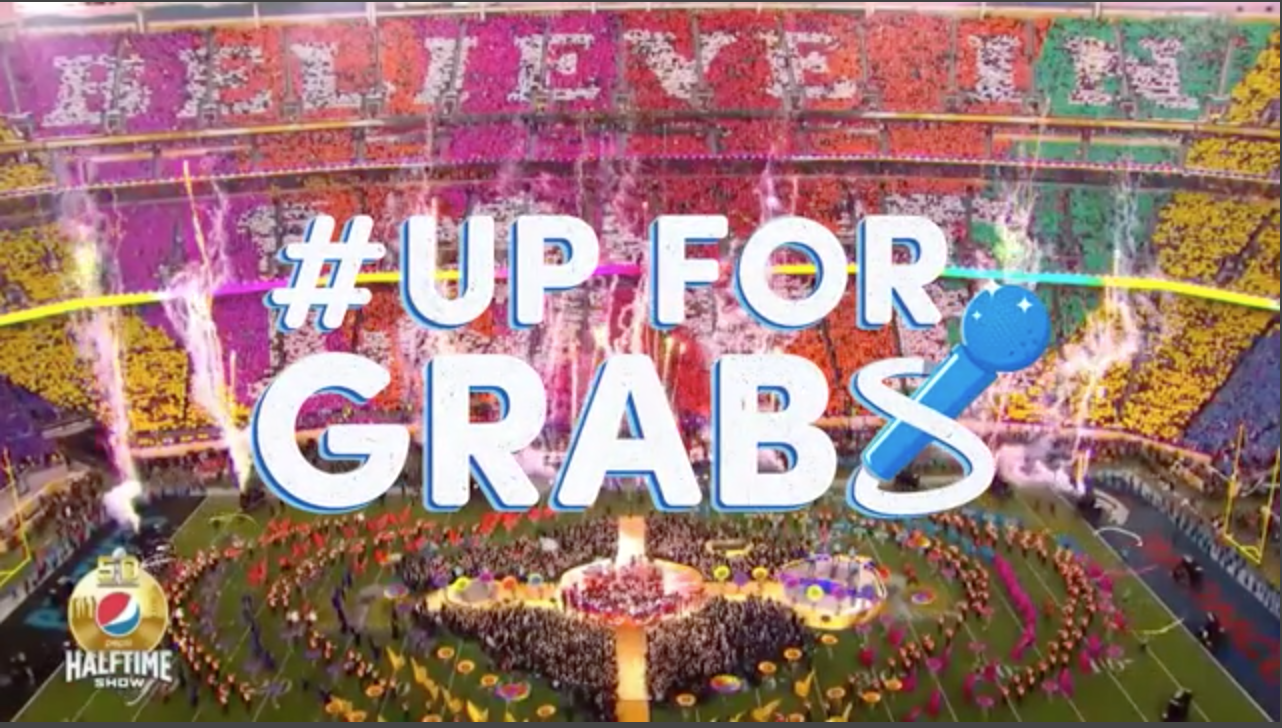