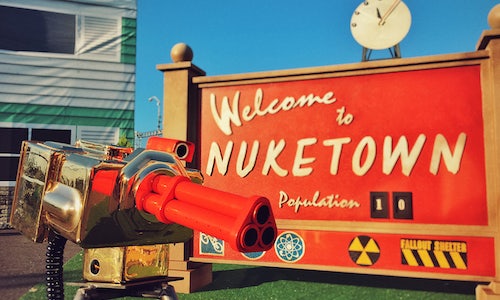 Finalist in Creative use of Technology, Live Streaming Video

Every year, Activision releases a new installment of its hugely popular gaming franchise, Call of Duty. And with the release of Infinite Warfare and Modern Warfare Remastered, this year was no different. To celebrate these 2016 title releases, we wanted to give our passionate fanbase an interactive, action-packed experience. With Call of Duty XP, fans were served up a three-day live event in Los Angeles that featured an arsenal of hands-on Call of Duty-related experiences, including a real life paintball version of one of the most popular in-game maps, Nuketown.

Call of Duty XP was a massive success, with the three-day event selling out its 6,000 person capacity. But Call of Duty has more than 6,000 fans. In fact, it has over 30 million followers alone on its social channels. It was our challenge to bring the excitement of the event to the fans who weren't able to be there in person, and in a way that was interactive, engaging and significant.

To let fans at home have their part in the paintball warfare, we placed hidden paintball cannons throughout the real life Nuketown course. By using the chat functions on Twitch, the world's leading video platform and community for gamers, fans were able to go full-guerilla by detonating the cannons on unwitting players.

We worked directly with Twitch to design an interface that allowed us to set a countdown clock for matches that ran every 10 minutes. Each round, votes were tallied from the chatroom participants who used #C4, #Smoke, or #Sentry to detonate paintball cannons at unsuspecting players. And because it was a livestreamed video broadcast, we were able entertain the fans at home by switching to the best shots, showing in real-time how they put Call of Duty fans' tactical skills to the test.

The Twitch livestream, traffic-driven social content (made up of GIFs created in real-time) and press pickup resulted in 79.55MM impressions, 1.44MM engagements, 326,340 minutes watched. It was also a critical weekend for our top two competitors – Battlefield and Titanfall – both of whom had made their upcoming titles accessible for early play in a beta release. But still, Call of Duty dominated the social conversation that weekend by 71%, compared to Battlefield's 26% and Titanfall's 3%.