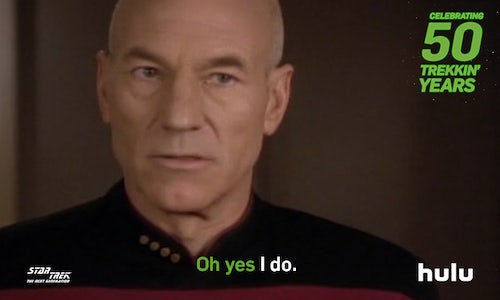 Lots of people love the shows on Hulu, but few people feel the same way about the brand. We needed to change people's perception. We had to show people that Hulu is a fellow TV, capable of making the viewing experience even better. That with Hulu, TV loved you back. So for the 50th anniversary of Star Trek, we set out to out-nerd the most devoted Trekkers - not just to show them that we had enough Star Trek content to fill a Galaxy-class starship, but that we we're celebrating the series with the same unbridled passion, and phaser-focused attention to detail as them.

For Star Trek's 50th anniversary, we set out to create shareable content that captured the spirit of the series. First we identified the social truth of Star Trek that made it such an enduring franchise– its iconic characters, optimistic view of the future, and its belief in the potential for human greatness. Then we pinpointed key moments when Star Trek fan culture would be peaking, like San Diego Comic Con and the 50th anniversary of the Original Series. Lastly, we looked for opportunities to make the content feel "internetty" to show that we not only understood Star Trek, but knew how fans interacted with the franchise. The result was a series of videos united under the banner of "50 Trekkin' Years."

Overall, the "50 Trekkin' Years" videos were huge hits with fans and demonstrated that Hulu wasn't just a brand that had Star Trek content, but was a brand that contributed to the culture of being a Star Trek fan. Overall, the series received over 13 million impressions, an average View Through Rate of 10.44%, and an average Engagement Rate of 0.6%, exceeding past all Hulu benchmarks. "Oh, Yes" specifically was watched over 1.2 million times and has the highest engagement of any Hulu social post (over 74,000). Fans were delighted by the discovery of Picard's secret catch phrase and shared the video over 13,000 times, contributing to the total 12 million impressions. The effort put into "Numbers" was called out by fans, many of whom realized that the clips had been assembled in series order. We've seen that when Hulu shows the love, subscribers love us back. 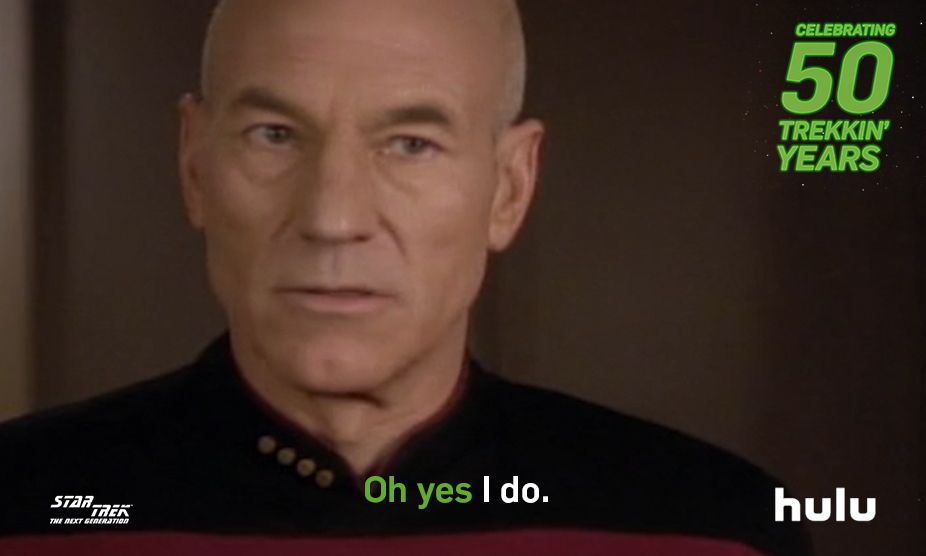