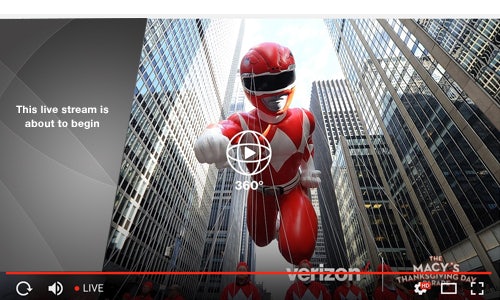 The Macy's Thanksgiving Day Parade is an American institution; it is second only to the Super Bowl in annual live viewership. But whereas an NFL game is an active viewing situation, the parade is as passive as can be. Families across the country tune in but then continue on with the rest of their Thanksgiving traditions while the parade plays in the background.

So, when we were presented with a client brief to use the parade to support a Black Friday promotion featuring the new Pixel, a phone by Google, and the Google Daydream VR headset, we proposed to livestream the Thanksgiving Day Parade in total 360 for the first time in its nearly 100 year history.

Using this new media and forging a partnership with NBCUniversal, the longtime broadcasters of the parade, we sought to connect both the promotional piece but also to use a technological first to put Verizon at the forefront of breakthrough digital experiences in the eyes of both customers and fans young and old of the annual parade.

But for a first time livestream of a TV institution to succeed, we needed to create not simply a parallel view to the NBC cameras but a completely new experience, one that was actively engrossing at every moment.

We saw this opportunity as not only unique for Verizon but historic in its possibility provided we could accomplish several pieces simultaneously.

First we needed to construct a never-before-seen visual storyline from beginning to end worthy of the new technology, so we secured six 360 camera locations along the parade route that would give viewers something they'd never seen before, including:

- A camera just above the famous marquee of 30 Rock, that was almost at eye level with the balloons themselves

- A camera at the very top of a hotel, overlooking the parade from a bird's eye view.

- A camera at the corner of where 6th Ave and 34th St for both the final turn as well as the finale of the parade.

Taking a page from broadcast best practices, we brought in celebrities, Marlon Wayans and Olivia Culpo, as hosts for the three hour event. However, when scripting their comedic banter, we worked closely with NBC writers and producers to be limit any and all dialogue so that the 360 viewers were able to see and watch as they wanted to.

Second, we needed to find a way to bring the promotional piece for the brand and the product seamlessly into the 360 livestream event. We created two unique 360 ads to be used almost like commercial breaks. (1) The first was a 360 CG animation of a human-sized snow globe inside which the Google phones floated through the snowflakes. (2) The second was a 360 video of the annual blowing up of the parade balloons the night before through the Google VR headset; letting people explore a New York experience that the rest of the country could never witness from their homes.

Finally, we had to ensure that the live stream itself was constructed for a mobile and online audience; we needed to invent the interest as a social event; to make people aware of the parallel option, draw them in and maintain viewership. We used paid, influencer and organic social promotion in the week leading up and worked with our partner, YouTube/Google on social auto-reminders for audiences that expressed interest. Then, for the event itself, we created a social response lab to bolster participation and support from a brand standpoint with strategists, creative teams and community managers throughout the parade and beyond.

Once the countdown was complete and the parade began, the experience was turned over to the livestream viewers. Our social response lab monitored the online conversation and so we could act on it in real time. Whether it was recognizing an overwhelming love for a particular camera and having the ability to cut to that camera in real time, featuring a specific float from different vantage points, or even having our two hosts respond to Twitter comments 'on air'.

Across social, the total reach far exceeded estimates with 349MM social impressions, 79MM potential impressions from sharing and total live viewership of 1.3MM – which surpassed YouTube's own estimates by more than 60%. Plus the livestream trended on Twitter and YouTube for more than 12 hours and millions more were reached from network attention, online outlets and sites like Mashable.

We took the cultural event and connected it to the brand and the product, where we saw clear online purchase intent. On Facebook and Twitter, both were above benchmark more than 122% and 439%, respectively.

In brand sentiment, the 360 livestream was a breakthrough unlike any we saw in 2016. The online conversation on just Thanksgiving represented 1/3 of the total online conversation for the holiday season. And the response we saw was 96% positive/neutral, right at the start of the most important shopping period of the year.

The first ever 360 livestream of the Thanksgiving Day Parade was more than just a technological first, a branded experience, or a promotional event. We created a combination of with a viewership that rivaled the NBC broadcast. While stats show that people tend to join 360 experiences, look around for for several seconds, and then move on, our average time was nearly 10 minutes, or more than half of the national television average for NBC's annual ratings juggernaut. It may have been a first but we have created a brand new tradition for Americans of all ages. 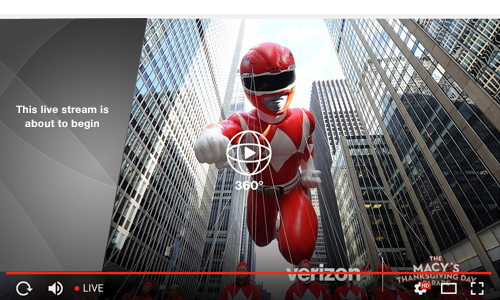