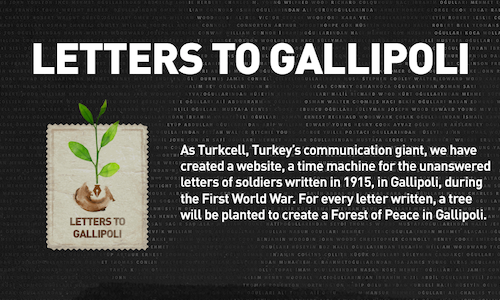 Turkcell is a leading company in the field of communication and so it operates by the objective 'connecting people to life'. We believe that life is lived as long as there is sharing and dialog in it. Without communication to other people, one's life isn't lived to the most. Today we all live by communicating. Life is shared within seconds and the technology that carries communication to our fingertips today is also unappreciated. 100 years ago, it wasn't so easy for our ancestors. As a communication leader in a country that is so involved in its roots, we wanted to use our expertise and create a bridge from today, back to 1915.

Starting the project we aimed to create a communication bridge both between today and the past and also between two nations using a historically important occasion. The communication problem in war time caused by long distances in Anzac fronts and less than 5% literacy level in the Turkish fronts was highlighted and users today found themselves in a place that enables them to salute the sacrifices their ancestors made years ago through a digital post platform. This platform not only enabled them to hear and answer their ancestors' feelings but also gave them life again as a forest in the name of those soldiers.

Letters to Gallipoli started off as an integrated project since its objective was to honor the lost souls of Gallipoli, we wanted to do it on many levels. First we released a short video to let people know about the project, the struggles those soldiers were going through and the ways they could contribute to the project. Then, we launched our website canakkaleyemektuplar.com on the 101th anniversary of Çanakkale Victory, March 18 and got our hashtag #IAmWritingtoGallipoli to Promoted Trending Topic on Twitter.

After, we invited people from Facebook via our promoted posts to letterstogallipoli.com on the Anzac Day April 25 for reply letters fo Anzacs. On both our websites we collected user generated content that is the answers to the unanswered letters of soldiers from the users of both nations.

That content wasn't left on the online platform but the letters people wrote became a forest, in a running marathon organized in Gallipoli, in the hands of peace volunteers. Also the unanswered letters of soldiers and the answers people wrote will be available both verbally and auditory with a digital interactive monument built in the area of Çanakkale Martyrs' Memorial.

With only 1 day of communication, we had more than 350K visitors on our websites. Users wrote more than 1.600 letters and our video has been watched more than 3,7 million times since. Our social media channels reached the highest numbers of the last 1 year.

Our press release was on newspapers with 28 (5 national, 23 local) news stories.

In the end, a memorial forest created by planting 10.000 trees.

Video for Letters to Gallipoli 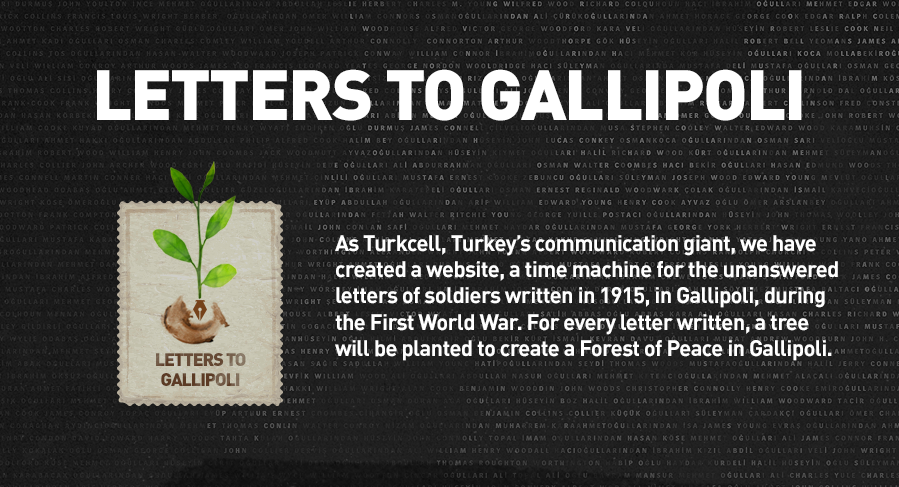