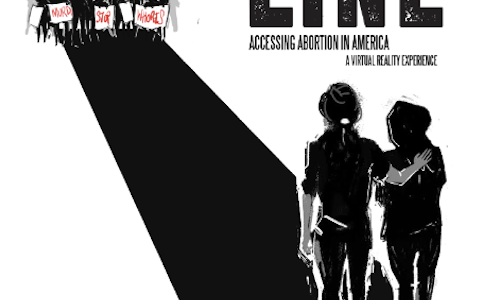 Across The Line Virtual Reality Film

Across the Line is an immersive virtual reality experience that puts the audience in the shoes of a woman seeking sexual and reproductive health care while being intimidated by clinic protestors. Using documentary 360° video footage and computer generated imaging (CGI), paired with a montage of real audio recording from protests, viewers gain an intimate knowledge of the harassment outside and compassion inside health centers across the country. The project comes during a critical moment of attacks on women's reproductive health and rights. In the past five years, states continue to enact more and more abortion restrictions, and Congress has voted over 20 times to restrict women's access to reproductive health care.

Virtual reality offers a new immersive experience that can help people better understand what women may face when they seek health care. Our goals with this video is to replace misinformation with the facts, start having honest conversations about bullying, harassment, and abortion in America today, and increase empathy. Nobody should have to face shaming, judgment, harassment, or intimidation in order to get or provide health care. Our objective in this film is to start conversations about how to change bullying and harassment in our communities. Across the Line is part of ongoing efforts by Planned Parenthood and other sexual and reproductive health organizations to reduce stigma and change the conversation around safe and legal abortion.

Using real audio gathered at protests, scripted scenes, animation, and documentary footage, the film is a powerful hybrid documentary-fiction depiction of the toxic environment that many health care providers, health center staff, and patients must walk through to provide or access health care on a typical day. The filmmakers recorded video and audio, including anti-abortion protest activity, in many United States locations.

The artists behind Across The Line, in association with Planned Parenthood, had and continue to have regular meetings, collaborate for screenings, events and workshops, and develop engagement strategy together. Given the broad and diverse networks of each organization, our collaboration yields positive results. Emblematic Group is perhaps the best-known company producing award winning immersive journalism using virtual reality and has broad connections in virtual reality as well as social justice. 371 Productions is an award-winning, socially engaged documentary filmmaking company and has broad connections in the film and social justice communities. Planned Parenthood, along with its network of 59 affiliates serving all 50 states has broad connections in health care, sex education, and advocacy.

Since the film's premiere in January 2016, we have been focused on meeting the demands of invitations to festivals and events to show Across the Line. Virtual reality equipment like the Samsung Gear and HTC Vive are still quite inaccessible to the general public. We knew that to have the desired impact we would have to find a way to bring VR to a much broader viewing audience. Our creators worked to make the film viewable with Google Cardboard, a very low cost and widely available VR viewer. A large number of branded cardboards are being distributed at large events and in kits for local screening.

Virtual reality has the potential to be a game-changer when it comes to empathetic storytelling by challenging stigma and shifting the conversation about abortion access in America. After a virtual reality experience of what some people go through to access abortion and provide care, viewers reported feeling anger, frustration, anxiety, and sadness. Because it's a newer medium, research on the impact of virtual reality on viewers is still emerging. There is a growing body of research that showing that virtual reality can arouse empathy by allowing viewers to experience someone else's experience firsthand. To measure the impact of this specific film, we partnered with multiple organizations to guide qualitative and quantitative directional research practices. Findings are expected to be released in early February 2017. Nearly 12,000 viewers at film festivals, conferences, affiliate and community events, and even the White House have experienced the empathy-amplifying, stigma-busting, action-motivating impact of viewing Across the Line. 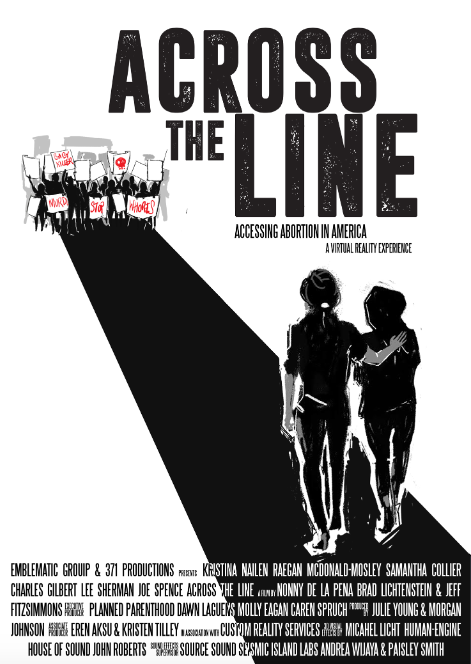