The Awesome Job You Can’t Apply For

Newly Grown Ups (NGUs) in India are high earning 25-30 year olds are fueling the rapid growth in the premium whisky market. Strict advertising regulations do little to prevent big brands from spending millions on surrogate properties like music festivals etc. and wooing them. Out-muscled, Grant's Scotch whisky had a measly awareness of < 2%, market share of < 1% and was finding little acceptance in the trade, even after 5 years of presence in the Indian market. With a tiny campaign budget (<$100k USD), it was critical that we delivered all key measures [Brand, Campaign & Business] with one shot- a single burst campaign.

NGUs are very dismissive of empty advertising sloganeering; especially those that mouthed clichés about bonhomie. However, our research showed that they were already living our global positioning of 'Stand Together'- today friends were each other's wingmen to greatness and believed that anything was possible when friends stood behind them.

Therefore, it was imperative that we moved beyond rhetoric and imparted a purpose to friendship. We needed to 'Activate Friendship for Shared Success' and found this purpose in a job vacancy that we already had- the Brand Ambassador (BA) for Grant's Whisky, the direct interface with the Trade, Media and Consumers at the ground level. With an enviable job description, being a BA is a role of a lifetime that was bound to get NGUs clamoring for a crack at it.

We decided to 'Friend-Source' our Brand Ambassador through a recruitment campaign that offered a real job, but with a catch- one couldn't apply for it, unless his/her friends stepped in to make a compelling case. The provocative nature of the campaign was succinctly captured through its title- The Awesome Job you can't apply for.

The campaign was executed in three phases:

1. Tease to hook- Entice prospects with the perks of the job and draw them to the Facebook application, through a lean media plan that included job listings, content partnerships and a unique campaign spokesperson.

2. Start a wildfire- Get the friends of the prospect to fill up the application and incentivize them to take our message to a wider audience- a group holiday in Scotland.

3. Wrap up on a high- Shortlist the most promising candidates and generate fanfare around the announcement of India's first Grant's Brand Ambassador.

The campaign worked wonders for the brand:

-With less than 1% of category spends, we achieved 11% brand awareness

-And awareness translated into affinity. (25% of those aware were likely to recommend the brand and 16% associated Grant's as a brand they were proud to drink with friends)

-The campaign, designed to tap into network effect, reached 7.5 million NGUs, with an exceptional response rate of 7.93%, by engaging just 1315 highly motivated nominees.

-In response, our market share increased to ~3% with a +318% volume growth in May-June 2015 over same period the previous year.

-An impressive trial rate- 5% of our TG led to on-trade establishments queuing up to stock us; the outlets grew to 261 from just 40.

-Introduced the first Brand Ambassador for Grant's Whisky in India to a large tuned in audience. 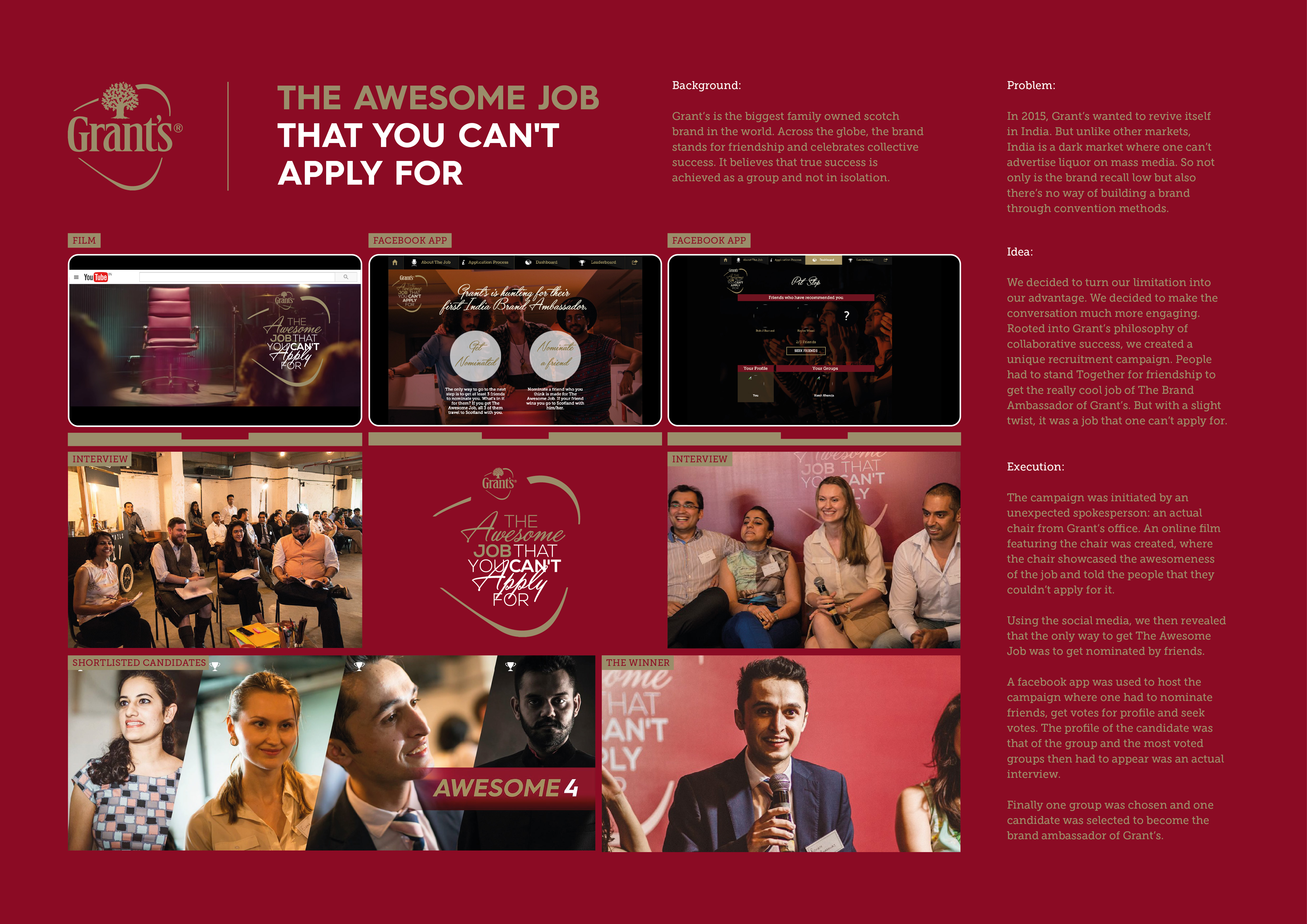