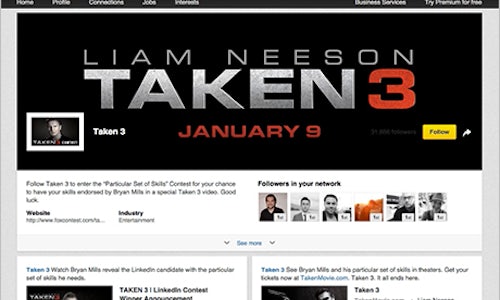 Fans loved the Taken franchise, but cynicism about the final installment was high. Though Taken 3 changed up the series m.o. – no one gets taken – fans needed a new reason to believe the series would deliver a worthy new chapter in Liam Neeson's canon. Plus, social buzz was trending negatively, so we needed a breakthrough way to break through fans' weariness.

Trailer Park's efforts would need a powerful 1-2 combo – a fresh digital take on what fans loved about the series that also delivered exciting visual proof of the action to come in Taken 3.

The idea? Refresh Liam's iconic "particular set of skills" speech through an entirely unusual social network for movie marketing – LinkedIn. Through the network, we'd give fans the chance to endorse Bryan Mills' highly employable skills, and in return give one fan an ass-kickingly cool prize: a custom video of Liam in character endorsing them on LinkedIn.

The campaign began December 7th with an announcement video from Liam featuring him using business buzzwords in combination with Taken action – for example, 'contract negotiations' was tied to Bryan Mills torturing an adversary. The video was promoted across traditional social media and on LinkedIn, driving traffic to the Taken 3 LinkedIn Showcase page. Showcase pages are similar to a Facebook page – and creating one on LinkedIn was unusual for any movie.

To continue the buzz, we released humorous videos relating Taken to the business world – 'If you think rescuing your daughter is hard, try networking.'

Powerful infographics that tallied up Liam's skills and action from the first two movies were only available on the page. Fans could learn more at the Taken 3 website - getting tantalizing action-packed glimpses into Taken 3's set-pieces, locations and characters.

The contest closed on 12/24. We chose the winner from among 30,000 entrants, then wrote, shot and edited the winner's custom profile video endorsement featuring Liam – all over the holidays.

The winning fan's video was released in the week leading to the premiere, driving fans to the film franchise's biggest opening weekend.

Using a traditionally conservative social network in an unexpected and playful way, we raised awareness and buzz about the film, helping drive a stunning $40+ million opening weekend – the biggest box office opening of the franchise. Variety.com cited the LinkedIn campaign as one of the reasons why.

The number of followers on LinkedIn, the level of engagement across all social media, and even Liam's excitement for the campaign were all larger than the client's initial expectations.

Plus, Casey Wiggins, a computer tech from Elkhart, Indiana, now has a personalized endorsement video from Liam Neeson highlighting his LinkedIn profile, and recently got a job at Target as a (much needed) Digital Forensics Security Expert. 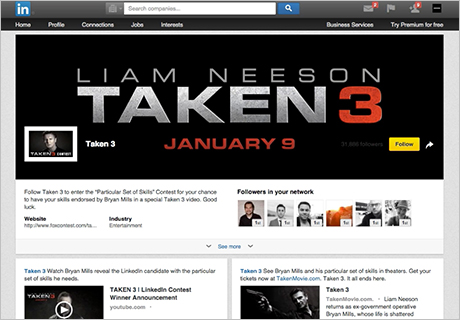