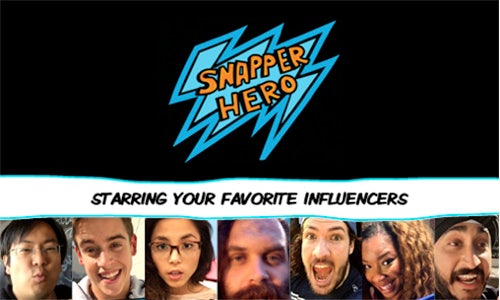 Entering Snapchat as a brand can feel a lot like being an awkward teenager trying to navigate lunchroom politics. That was especially true in the early part of 2015 when Discover had yet to launch and Snapchat wasn't yet offering brands a lot of consumer engagement options. But, when AT&T was looking to position its brand as the best mobile provider for the "cord-cutting" segment of millennials—who effectively evade traditional advertising—we saw an opportunity in Snapchat. This emerging platform already boasts 200 million unique monthly users, 71% of whom are millennials. Snapchat was the right platform, but it had a unique planning problem—how do you create a campaign that resonates when all of the content posted disappears within 24 hours? Our strategy was to embrace the ephemeral nature of Snapchat by tapping into social influencers to create a storyline with moments the community wouldn't want to miss. Part bi-directional superhero storyline and part mega-friend group, SnapperHero is the first ever, branded series created exclusively for Snapchat. With SnapperHero, we sought to pioneer new forms of social storytelling and ultimately transform the 24-hour limitation into a reason to engage by creating the first ever scripted series on Snapchat. In the story, influencers were given super powers that functioned as non-intrusive product demonstrations for AT&T. Our influencers invited their fans to join them in an epic battle played out in real time. With the help of influencers, SnapperHero authentically integrated AT&T into the Snapchat community.

SnapperHero is the first ever, scripted series created exclusively for Snapchat. The story was based on seven of the world's biggest influencers receiving super powers from AT&T. In this two-way, real-time series, fans controlled the storyline—even helping the influencers get super powers, which served as product demonstrations of the AT&T network. Instead of trying to force the influencers to be people who they weren't, we cast them as heightened versions of themselves meaning they were recognizable to their existing audiences while existing in our fictional world.

One of the largest challenges on Snapchat is directing consumers effectively to your content—in order to excite and draw audiences, we had each of the influencers announce the show on their owned social channels driving audience to our Snapchat channel. Influencers explained on all their social channels that the audience wasn't just going to watch the epic story play out, but that they could truly impact the storyline with their actions. Engaging the audience in the co-creation of the story, inviting them behind the scenes, and making them feel like a hero in the story were all reasons for the fans to return to the narrative again and again. Influencers didn't just drive traffic or star in the series, we enlisted their help in actually directing and distributing the content making it truly feel like it was the voice of the community. Opting to behave natively, we shot content with phones, served it vertically, and integrated various platform capabilities such as "doodling." Delivered via the "stories" function, fans had just 24 hours to engage with the story before they missed out on an epic group experience with their favorite influencers. Though, in some respects, our storyline was a classic superhero narrative, we made the AT&T network central to the storyline, but also the platform itself, allowing consumers to engage with the storyline in the same way that they would a friend. This made it so that fans felt like they were participating in an experience rather than consuming content. They could literally snap back commentary, plot suggestions, and selfies. We integrated their suggestions into the show in real time, but also sent them back custom SnapperHero doodles that transformed them (and their pets) into characters in the narratives. Fans truly felt like they were getting to play along with their favorite influencers.

SnapperHero solved the problem of an ephemeral platform by placing influencers into a native setting and engaging consumers to participate in creating an epic story. AT&T became an integral part of the storyline—not just as a sponsor—by using the influencers' super powers as non-intrusive product demonstrations. In just 52 days, SnapperHero organically gained 190,000 followers who averaged 74%+ completion rates earning 133 million impressions. This advertisement-evading audience actively sought out branded content for 52 consecutive days, even trying to save it for later—our campaign generated 86K screenshots. We effectively positioned AT&T as an innovative brand who provides consumers with unique experiences. 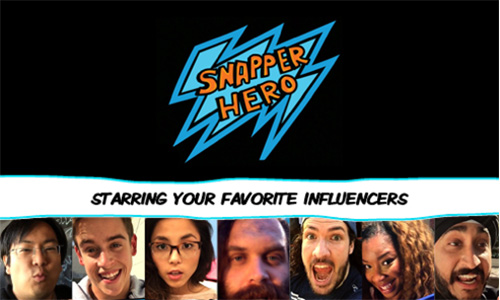