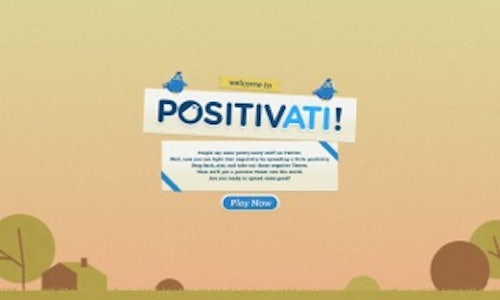 We're big proponents of positivity around here at We Are Royale, so when ad agency Hill Holliday came to us with an idea to create a game that could help spread all that positivity, we couldn't resist. #PositivATI is a Twitter-based game that is part of a new multimedia campaign for Partnership for Drug-Free Kids, a national nonprofit dedicated to reducing substance abuse among adolescents. The "Who Controls You" campaign was created pro-bono by Hill Holliday and award-winning social media influencer Maris Jones as part of the Partnership's Above the Influence (ATI) teen program.

For We Are Royale, led by Head of Digital Production Beck Henderer-Peña and Creative Director Loren Judah, the goal was to create an approachable arcade-style game that would not only work across many different devices, but also would engage a wide demographic of people with its gameplay. "It was important for us to come up with a game aesthetic that people could easily understand and jump into at any moment," explained Judah. "We felt the classic arcade game idea would be more accessible; however, we also took modern cues through the use of color and various design elements, such as the tactile, painterly quality of the environment."

The goal was to make a fun-lovable game that would remind everyone you don't need to be a hater to love life; in fact, we think it's just the opposite.

"PositivATI" game is a slingshot gallery where your only goal is to knock down as many negative tweets as you can. Every positive disc you slam into the birds, you'll take down one more hateful message from the proverbial "net." It's the epitome of an arcade classic, like Duck Hunt, but with a slingshot and social media.

The Birds of Above the Influence are a hearty bunch. To establish the world and tone we dove head-first into what can only be described as ornithology for character design nerds. With so many possible variations of the fluttery critters, we narrowed down our selection to the Jenoralia and Brodilla. Two of the most beautiful specimens in the ATI bird kingdom.

Making them move was our next challenge and one where we turned to our classic game-making repertoire of tools and techniques. Flying, carrying tweets, getting hit and fluttering away all need some fun detail animations. Birds need to react to a face full of positivity.

Every great, negative bird-smacking gamehas equally great, negative bird-smacking levels. With ATI, we really wanted to bring an entertaining level mechanism into the experience, something that symbolized the negativity we're trying to overcome. We devised a simple level progression that rises vertically into the air, taking us from a backyard, through the stratosphere, and into space. So when you reach the "Highest Level" of the game, you literally reach the highest level - rising above the influence, if you will.

In addition to our high-flying adventure, we designed the levels to be a progression of color that leads to the mother of all negative tweets: the infamous, nasty tweet-carrying Brodilla.

We made sure #PositivATI runs on anything and everything. We built this game from the ground up to take advantage of HTML5 and JavaScript animations. We built a system for our in-house animators to create the birds and backgrounds as they traditionally would, using the standard animation tools, then we took the results of these beautiful animations and embedded them as JavaScript animations. The game itself scales to fit any screen as well, so yes, you can knock those nasty tweets out of the sky even on your 80" TV and it still looks great!

You can also play the game on that phone you've got in your pocket. In any case, this game is designed to let everyone contribute those positive messages anywhere and everywhere with a fun and entertaining slingshot game.

#PositivATI is accessible via a website, and will also be used for future community forums and events in a larger installation format. The game was first featured as a part of National ATI Day in Washington, D.C. in October.

As We Are Royale's Creative Director, Loren Judah explained, "The team at Hill Holliday understood the framework and everything going into the game, so we could have honest conversations about how it was being built. This was definitely a partnership in making the best game experience. Their flexibility and trust allowed us to be as creative as possible."

We made our social spaces a much more enriching experience for us all. Because seriously, nobody likes an angry bird. 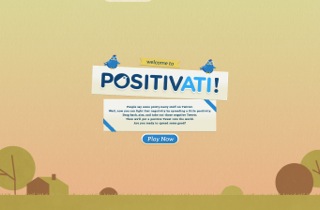 We Are Royale, Partnership for Drug-Free Kids