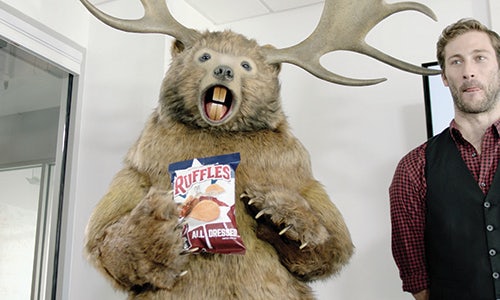 For years, Canadian ex-pats have used Twitter as a means of begging Ruffles to bring All Dressed chips to America. And finally, in 2015, their pleas were heard: Canada's favorite Ruffles flavor was coming to the US for a limited time.

But although the flavor was well known in Canada, most Americans didn't know that an All Dressed Ruffles chip is one that combines salty, savory and sweet flavors on one ridgey surface. So Deep Focus set out to spread the joy and knowledge of this Canadian delicacy from sea to shining sea.

We went all in on Canada.

To help Americans understand both the chips unique flavor combination and Canadian heritage, we created a mascot that combined other great things from Canada. Part beaver. Part moose. Part bear. Meet the Beavoosear.

We introduced him through a preroll video that took viewers into one unforgettable marketing pitch meeting.

Then, we continued to tell the story of the Beavoosear through social-influenced static and video content. For instance, we saw that people were commenting on Ruffles' Facebook page that they were having trouble finding Ruffles All Dressed in stores. So we responded by creating a series of Facebook videos showing the Beavoosear bringing the taste of All Dressed chips to the people.

And through it all, we reached out to those fans who had first requested All Dressed chips and thanked them by sending them Canadian Care Packages.

The All Dressed campaign generated over 9 million video views, with a virality rate 78% above the combined Facebook and Twitter average.

By going all in on Canada, we created content that truly resonated with our target and, most importantly, got them buying Ruffles. Our content drove the highest levels of engagement Ruffles saw in 2015. The brand saw an 80% increase in positive comments on Facebook, and the rate of video views and sharing on Twitter jumped by more than 200%. 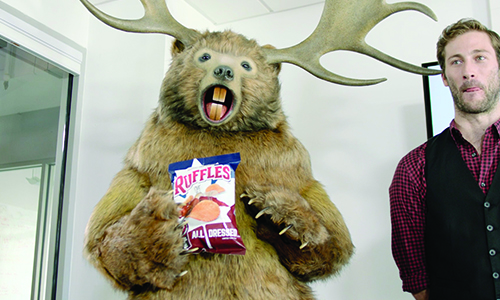