Katy Perry has a powerful digital presence and is the most followed person on Twitter (74MM+ followers at the start of the campaign and 82MM+ to date). Coty seized this opportunity to pioneer a groundbreaking way to sell Katy Perry's Mad Potion fragrance on social media. The goal was to spread awareness in a digitally innovative way and convert Katy's huge fan base to purchasers, leading to the industry first social media pop-up shop on Twitter, enabling fans to both engage and purchase with a single tweet.

The strategy was to leverage Katy Perry's 74MM+ followers, and her superfan KatyCat influencers who have tremendous reach, to launch the fragrance industry first Twitter pop-up shop that married social media and e-commerce. The digital strategy included a teaser phase, pop-up shop launch phase with e-commerce capability, and an ongoing UGC campaign.

The teaser phase was designed to build the fan base and strengthen engagement. During this phase, Katy Perry revealed the Mad Potion advertising visual and TV commercial on her personal Twitter account in conjunction with a teaser post inciting fans to "Follow @KatyPerryPopUp for all of the latest on #MadPotion." Coty also partnered with several KatyCat influencers, leveraging their strength and reach to spread awareness about the upcoming virtual shop opening. The doors opened to the US Twitter pop-up shop on July 22, 2015 in conjunction with an exciting PR launch event in Los Angeles attended by Katy Perry. The launch of the shop was an exclusive opening party that was unlocked on Twitter for just 24 hours, giving fans the special opportunity to purchase Mad Potion before it hit stores in the US. Only fans that followed the feed had access and opportunity.

The launch event incorporated Twitter's new "Buy Now" functionality, which was a key feature of the campaign and allowed consumers to purchase Mad Potion directly from the Twitter platform. After clicking the "Buy Now" link on the Tweet, the user was able to type in payment and shipping information directly and seamlessly in Twitter. Coty worked directly with Twitter and Cult LDN digital agency to roll out this industry pioneering activation.

A key component of the fragrance launch event was the integration of KatyCat superfans who acted as shopkeepers to share fragrance and ingredient information as well as encourage purchase and spread awareness. Katy Perry's involvement propelled the growth of a substantial fan base and drove traffic on the day of the event.

To guarantee continued engagement throughout and after the event, the digital UGC campaign commenced. Followers were asked to share their selfies so a "splash of Mad Potion" could be added to their photo, which consisted of fun and whimsical illustrated elements taken from the advertising campaign.

After the 24 hour launch event, a sampling initiative on Twitter was implemented offering exclusive samples to fans who were unable to partake in the launch event. This initiative enabled Coty to accumulate a sizable database of fan information and demographics, all while sharing the fragrance with fans to generate buzz and drive purchase.

As a fragrance industry first campaign, Katy Perry's Mad Potion Twitter Pop-Up Shop had tremendous results as it successfully drove brand awareness, recruited a plethora of new fans, and converted fans to purchasers. Within 24 hours of the campaign launch, brand awareness skyrocketed as #MadPotion became the #1 topic followed globally on Twitter. #MadPotion trended worldwide two times during the campaign which is an enormous feat. With unprecedented results of 12 tweets per second, 73.5MM people were reached with 189MM impressions.

Regarding fan recruitment, what started as a community of just a few followers, grew to over 15,000. Today, the @KatyPerryPopUp channel has over 26,000 followers and continues to grow.

The Twitter Pop-Up Shop successfully empowered fans to purchase as the program used e-commerce to sell directly on Twitter's social media platform and 70 units of Mad Potion were sold in the first hour. The execution of an industry first e-commerce pop-up shop that unleashed revolutionary "Buy Now" technology combined with strong Katy Perry and fan participation was an unequivocal success. 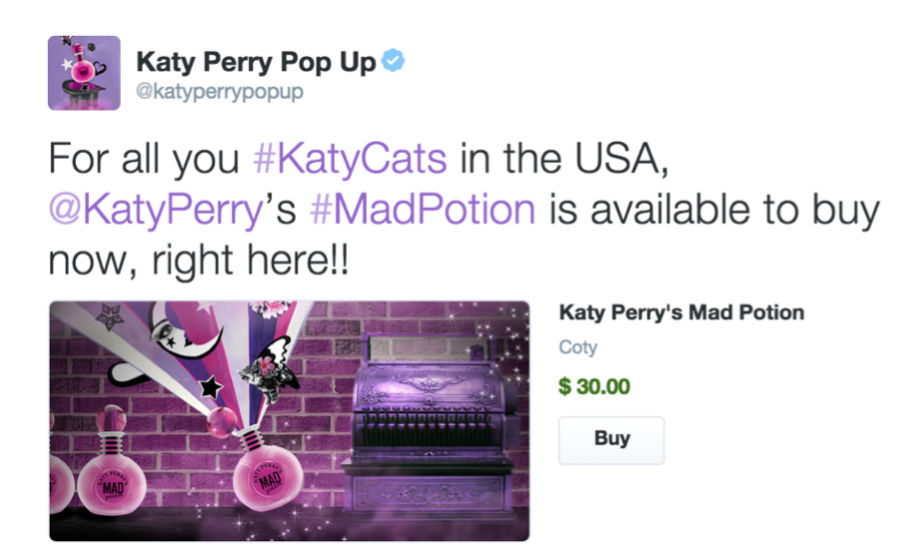 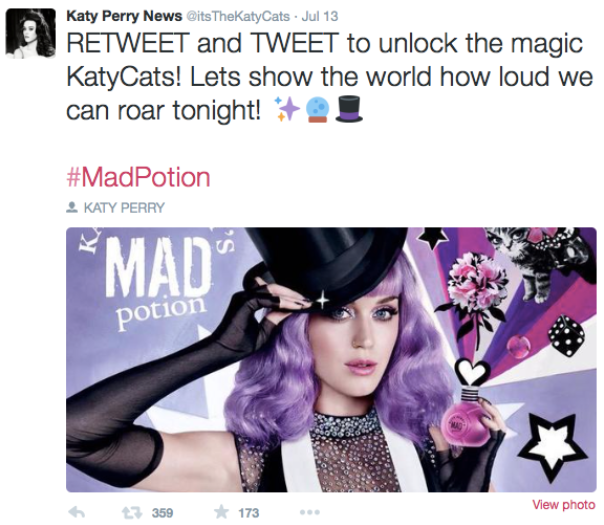 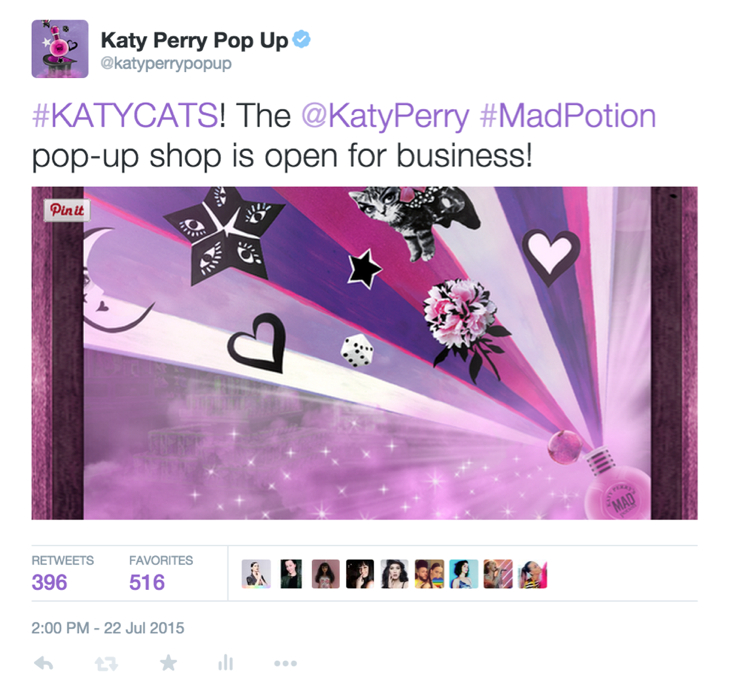 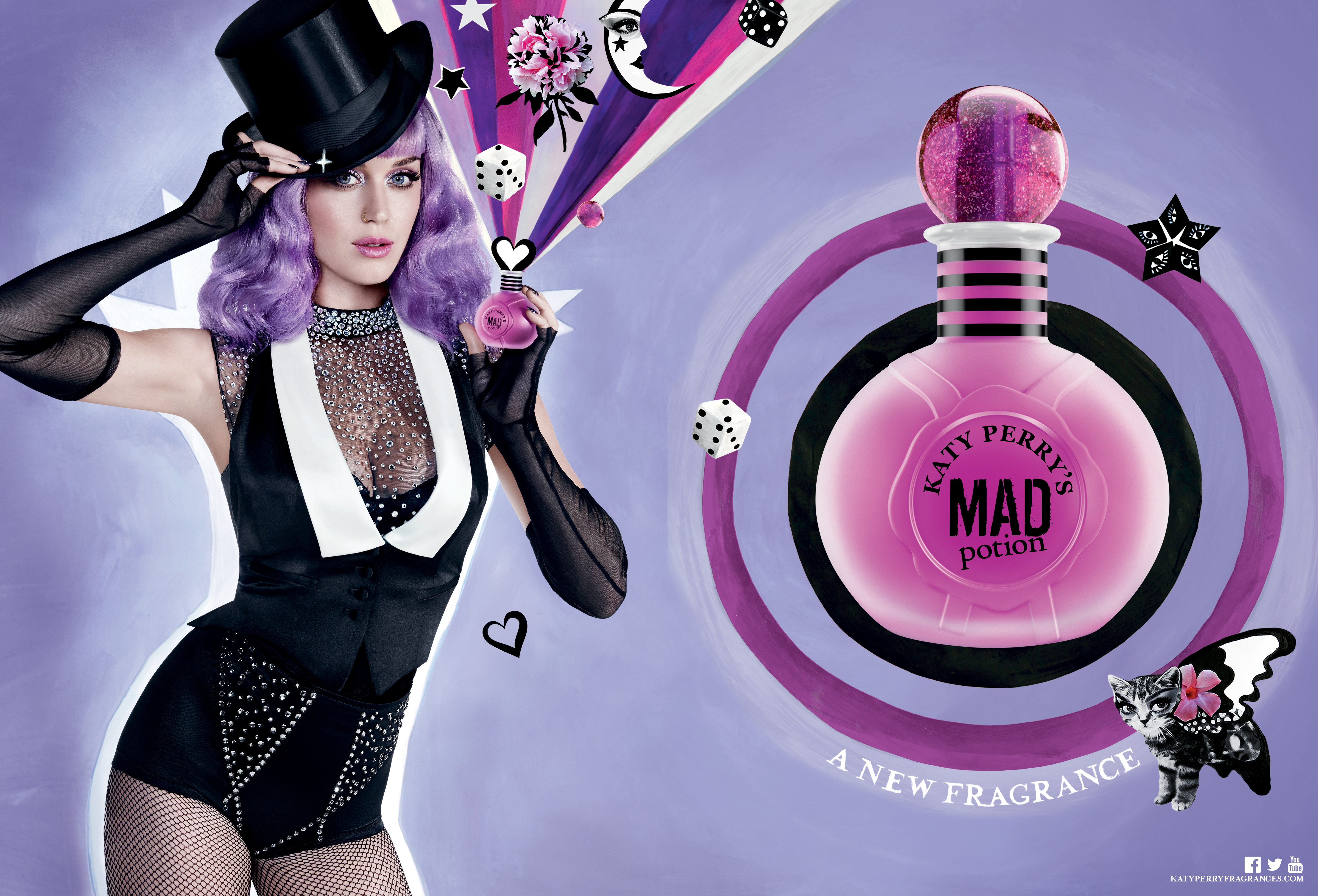