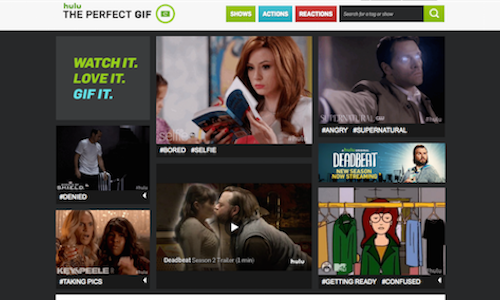 Nothing makes a point quite like a great GIF, but while the Internet is chock full of various GIFs, the moment often passes while searching for exactly the right one. Hulu decided to create a one-stop shop for TV fans to find high-quality, high-res GIFs, built for sharing: The Perfect GIF. Since Hulu's specialty is TV, they have access to a massive catalog of both classic and new TV shows. This allowed them to create a vast library of GIFs that provided something for everyone. By rotating the featured GIFs on the landing page, Hulu could nimbly highlight new acquisitions. The Perfect GIF aimed to leverage Hulu's substantial following of TV fans and provide them with a fun service, while building brand loyalty for both Hulu and the represented television shows. When fans are able to easily access The Perfect GIF, everyone wins.

The Perfect GIF was custom-built on Tumblr, a prime destination for sharing GIFs, and was designed to be easily accessible on both mobile and desktop. The website was intentionally modified to more deeply integrate with – and benefit from – the Tumblr platform and community. By hosting the GIFs on tumblr.com (vs. 3rd party servers) Hulu was able to capture valuable impressions from native Tumblr searches. Since Tumblr is a great place to find dedicated fans, hosting the GIFs there gave Hulu a chance to add to its following of TV fans and cement itself as the go-to destination for all things TV.

Hulu's team created thousands of GIFs from over one hundred featured television shows – but high quality GIFs were just the beginning. Ease of use was a key factor in making The Perfect GIF a success. To make searching seamless and simple, GIFs were categorized in three ways: by show title, action, and reaction. Fans of one particular show were only a click away from accessing the entire library of that show's GIFs. But where The Perfect Gif really excelled was letting fans search for the ideal reaction or action. For example, if fans wanted to show appreciation for a great tweet, they could click on the #clapping tag and pick their favorite applause GIF from shows like Scandal, Cheers, and SNL. If they needed to express themselves, fans could click on Reaction tags to find the ideal GIF for their feelings, from #LOL to #OMG and every #awkward, #aww, and #awesome emotion in between.

Because Hulu adds to its library frequently, a major objective of The Perfect GIF was to highlight new content with landing page takeovers. Over the course of the year, the main page highlighted new acquisitions like Seinfeld and the Adult Swim catalog, as well as Hulu original shows like East Los High and The Mindy Project. The site was able to provide bang for the buck, earning organic shares and raising brand awareness and affinity.

Within their larger social media strategy, Hulu used Perfect GIFs to communicate one-to-one with fans and participate in Twitter trends like #KissAGingerDay and #NationalHamburgerDay. Fans on Tumblr were encouraged to reblog, and reblog they did, especially when the content resonated deeply with the Tumblr demographic.

With the help of paid support and press, the site saw a very strong launch. Since then, the site has seen consistent traffic, and average conversion rates have increased and continue to perform at a high level. Attention from the press was a major factor in driving traffic to the site. The Perfect GIF was featured on blogs like Engadget, Tech Crunch, Refinery 29, and Mashable. Traffic from these articles produced some of the strongest conversion numbers.

The Tumblr staff has featured Perfect GIFs on their blog and in the "staff picks" section of the website multiple times. These placements have significantly boosted overall metrics with 46% of total Tumblr impressions attributed to featured GIFs – a reaction GIF starring Seinfeld's Elaine received over a million impressions alone.

The site proved to have a wide reach, garnering over 14 million impressions, 227k engagements, 30k Tumblr reblogs, and 60k likes to date. Fan reactions were extremely positive, with one fan even calling it, "THE BEST THING EVER." Tweets proclaimed that the site "you never knew you needed" "made my day".

Because fans used the GIFs to express their feelings, react to their favorite Hulu shows, and illustrate exciting events in their lives, The Perfect GIF allowed Hulu to participate in that conversation in a helpful and organic way. Providing a useful and continuously updated service to TV fans has proven key to earning the affection of GIF-a-holics and TV fanatics alike. 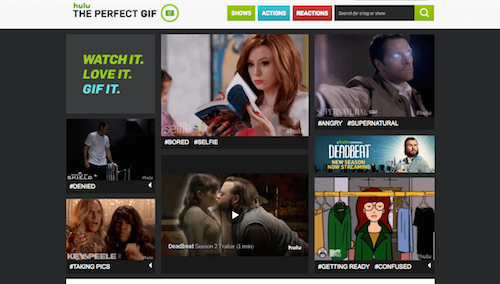 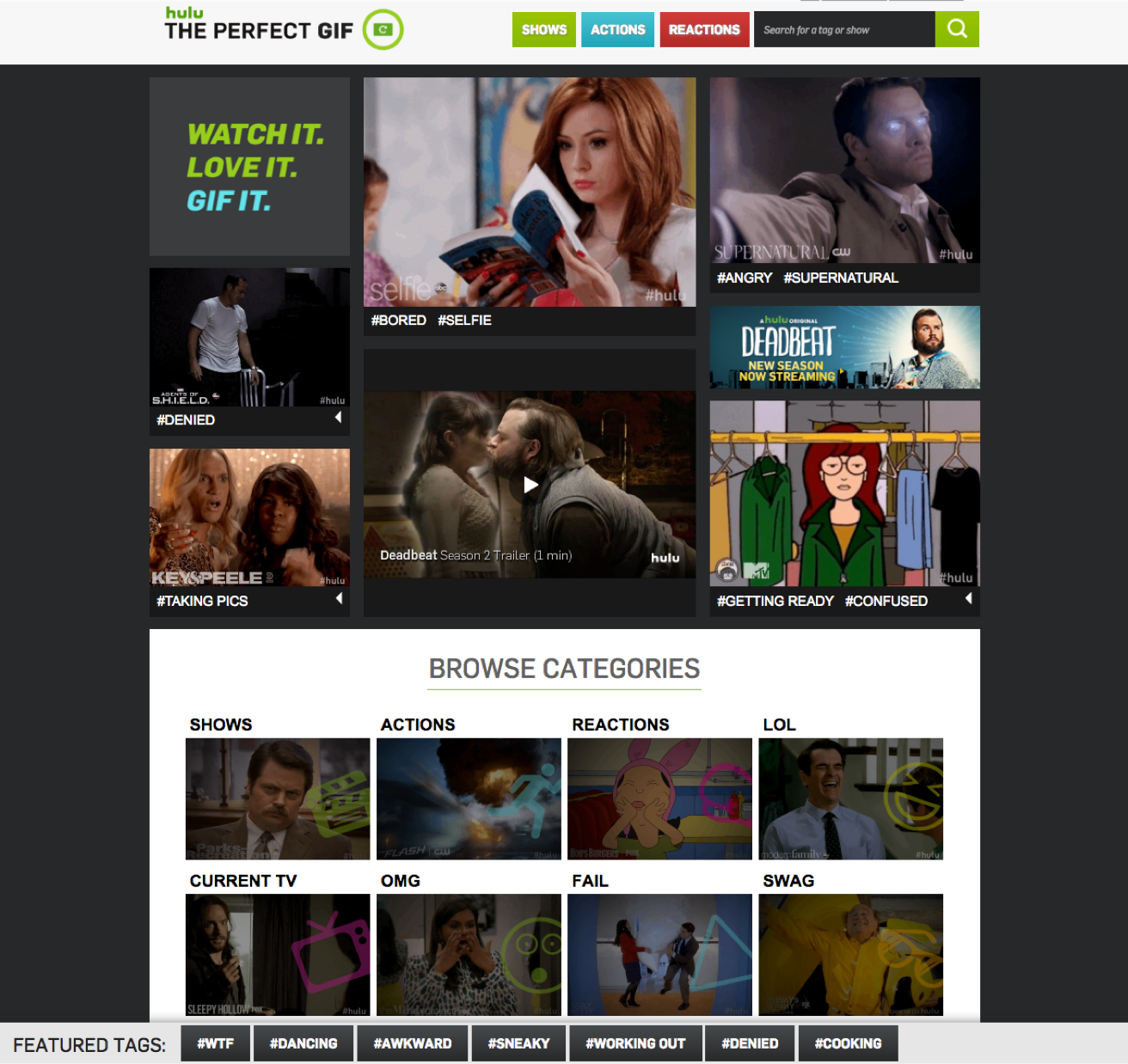 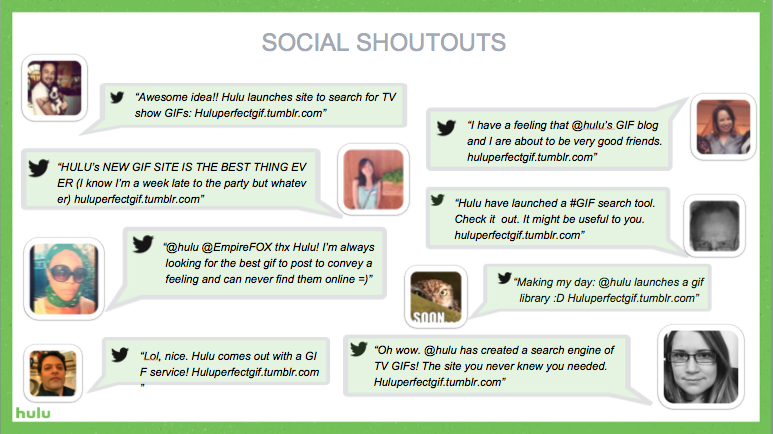 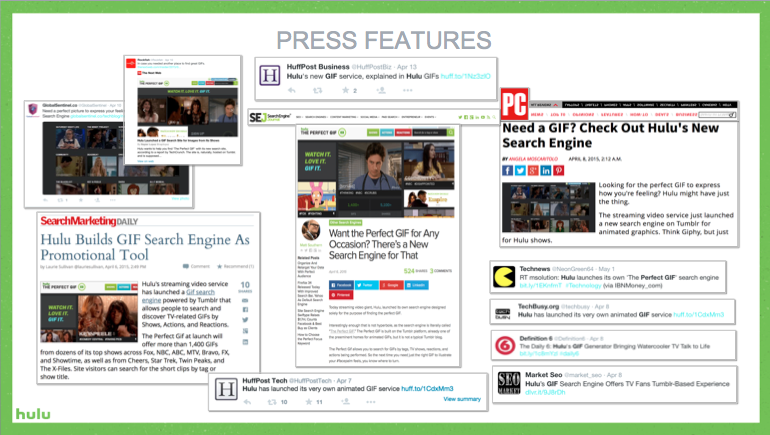 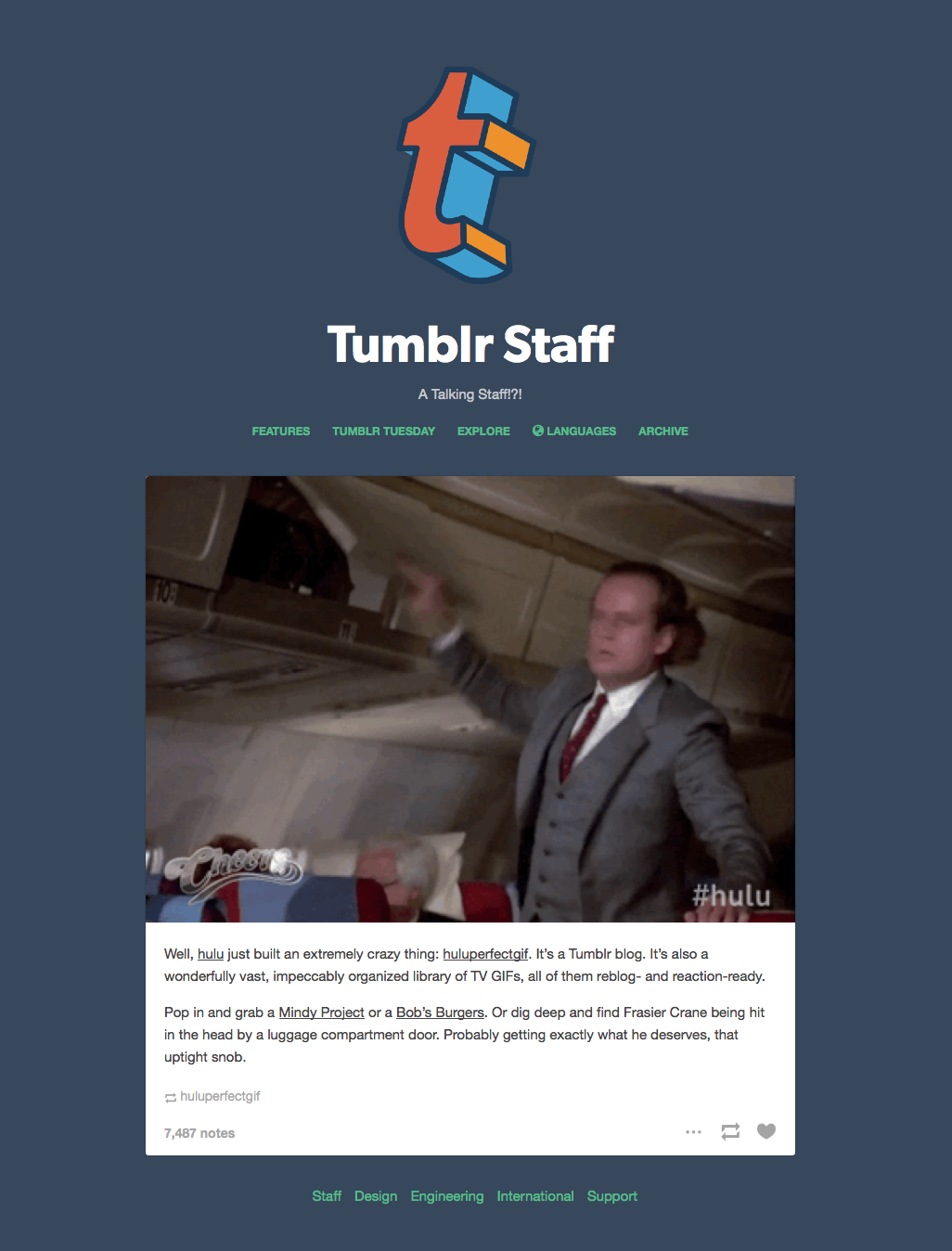