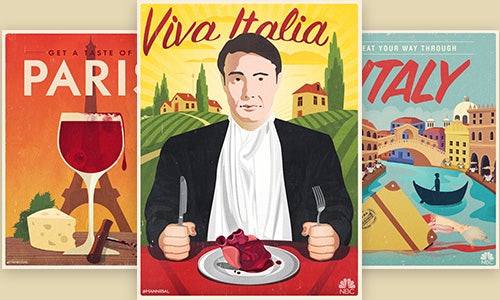 With fall launches around the corner, NBC turned to us for high-end social content. We dove in with an outsider's fresh eye, offering a slew of original looks for social graphics ensuring that explorations were in sync with the brand. Creative leaned forward through fresh animations, stylized typography and motion memes, all working together to set a new level for captivation and engagement.
By Season 3, Hannibal fans were intensely devoted to their show, in love with the intense characters, twisted dramatic scenes and the supremely dark humor. We looked to reward them on social with an elevated approach to original content, a series of art created in tribute to Lecter's sophisticated tastes. The objective was to turn them from passionate fans to active social advocates with content worthy of the show – and of their sharing.

In addition to the expected countdown and quote pieces showcasing the lush set pieces and sharp writing, bpg drove awareness leading up to the season and interest across episodes with a series of original "Illustrated GIFs" that took a graphic turn.

At the end of Season 2, Hannibal is seen jetting off to Paris after a gruesome murder. We teased his upcoming Season 3 movements with faux "travel posters" that showed Europe through Hannibal's eyes, designing cannibalistic twists into classic travel illustration. In Italy, his gourmet meal is, literally, a heart still beating on his plate. And the suitcase floating in the canals of Venice hints at the body stuffed inside. In Paris, a tempting glass of red in front of the Eiffel Tower endlessly drips with its true contents – human blood. These iconic illustrated looks were true eye-grabbers in social feeds, providing fans with vintage "posters" to claim and share across social channels.

Our original "Illustrated GIFs" enlivened official show pages, boosted engagement and triggered enthusiastic activity from fans and NBC executives alike. The creative was picked up and reproduced on everything from Refrigerator Magnets on Etsy to actual printed pieces available for purchase in the official NBC Store. 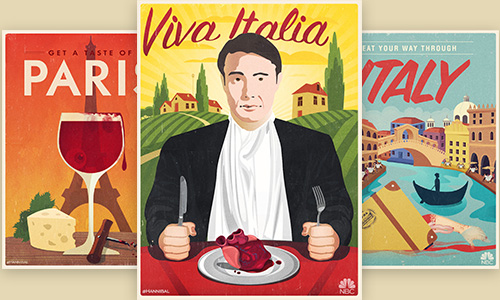