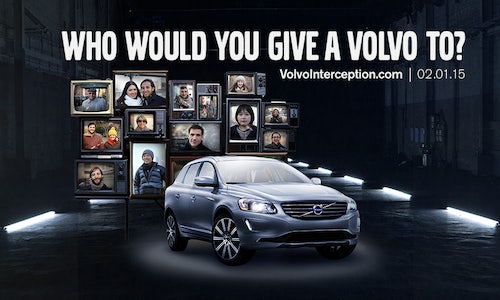 The Greatest Interception Ever

Our objective was to bring Volvo, a quiet and often forgotten brand, to the public's attention. To show our belief in the importance of people, proving to the world how we care about our consumers. Not only that, but on the biggest media day of the year, the Super Bowl, when brands spend $4.5 million for 30 seconds of airtime. We turned our challenge into a strategy. Take that ad momentum, and use smart digital second-screen tactics to swivel attention away from competitors. Not just once, but throughout the game. With a strong idea, we were confident in the media and promotional tactics to activate the nation.

With the ultimate goal of broader awareness and consideration for our brand, we needed to reach out to a new audience on a new stage. For current fans of the brand, they would see our messaging, but for those for whom Volvo was not top of mind, we used online video and targeted social advertising to get them ready for our Super Bowl Sunday activity. New activity from new users could mean a wider net of earned media, outside of our existing customers.

The idea was simple. Instead of focusing on spending money to get attention, we wanted to give consumers the opportunity do something for a person who matters to them. This was directly aligned with Volvo's position as a brand that focuses on what matters to people. All someone had to do was tweet with #VolvoContest nominating their loved one. The catch: the tweet had to go out during another car company's Super Bowl commercial. Every tweet generated an auto-response from the brand that drove people to the next step - a short nomination form, allowing them space to explain why their nominee deserved one of 5 new Volvo XC60s. Online video and earned media coverage leading up to the Super Bowl let people know what they had to do, and real-time tweets from Volvo corresponding to in-game moments kept people participating for hours.

Awareness came in multiple tactics. Support in digital video would ramp up one week before the Super Bowl. As we moved closer to game day, awareness was boosted with a custom network partnership. An exclusive partner was paramount to our success – a custom sketch on Jimmy Kimmel Live! Including an on-air giveaway of an XC60, drove massive awareness leading into the weekend. Coupled with aggressive in-game and post-game follow up, we ensured that the Volvo brand was mentioned alongside every other paid sponsor in the biggest media week of the year. Leading into Sunday, paid social media support hyper-targeted around competitor activity would drive on-platform Twitter actions and engagements on game day. Throughout Sunday, responses to in-game activity were promoted to keep the campaign active for several hours.

The response was astounding. All told, more than 80 stories were written about the work, and the campaign saw more than 230 million earned media impressions valued at more than $44 million. With more than 55,000 tweets during the 3 hour telecast, #VolvoContest was the most-tweeted automotive hashtag on Super Bowl Sunday. #VolvoContest trended 3 times on Twitter and "Volvo" trended globally. Volvo was mentioned nearly 114,000 times on Twitter, 3rd-most of any automotive brand, all without a Super Bowl ad. Our online video passed 3,400,000 views in a week, and our website saw more than 116,000 visitors in 2 weeks. People were tweeting their children to nominate them, and several joined Twitter just for this campaign.

It wasn't just the first step that people took. Of the nearly 20,000 unique users who tweeted, more than 10,700 people filled out the nomination form (54% completion rate), giving us all those unique, wonderful stories to choose from. Most importantly, the XC60 had the highest February sales increase of any car in its segment (70.7% year-over-year).

Video for The Greatest Interception Ever 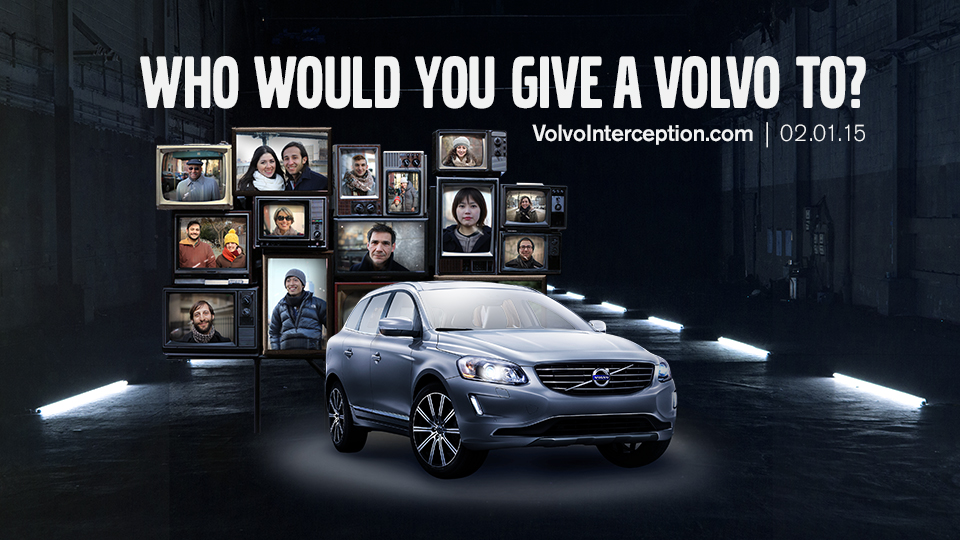