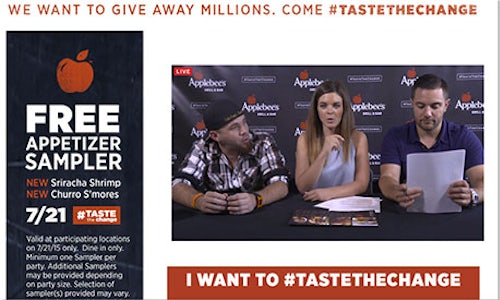 Applebee's has been around the social block a time or two. They have the trophies—and a few sexy scars—to prove it. It's that kind of experience and dedication that has enabled them to build one of the most devoted online communities in the business.

That kind of success also makes it tempting to rest of one's laurels, but not for Applebee's. They wanted to demonstrate that they out-love, that they're willing to try new and innovative things, and that they have a community in place who's willing to do the same things.

Over the past 18 months, Applebee's has been initiating a reinvention, a reimagining, of their menu and offerings. That kind of significant change needed some serious attention drawn to it; Applebee's had turned into that person who turns heads when they walked into the class reunion.

It was time for Applebee's to make an entrance in the largest online and offline ways possible. It was time to #TasteTheChange.

We coordinated events encouraging folks to #WatchApplebees and #TasteTheChange by incorporating a number of new social platforms to create an integrated and interactive experience. We started with a LIVE tasting event in Times Square and followed that up with a national tasting event where we broadcasted mobile LiveStreams featuring influencers trying our food.

On May 13, 2015, Applebee's occupied Times Square with live bands, free food and a takeover of its iconic billboards illuminating the New York City skyline. People were invited to try the new appetizers and Handhelds, all in an atmosphere they would never forget. Did we mention? Jason Derulo performed for guests!

In true Applebee's style, the experience didn't end there. Thanks to integrated social media platforms, guests who couldn't make it to NYC were invited to their local Applebee's to join in the Taste The Change Fest experience with a BIG incentive to do so.

The ABC SuperSign and the Nasdaq Sign in Times Square displayed a social media feed of Applebee's fan pics tagged with #WatchApplebees as they dined in their local restaurants. And Taste The Change Fest was broadcasted live via Periscope so fans could tune in from wherever they were. For the Periscope live stream, we connected fans across the nation with Jason Derulo in real time making them truly feel a part of the experience.

Prior to the event, Applebee's used a blended paid and organic strategy to drive awareness among both fans and skeptics. A trip to their local Applebee's and a photo from the visit could win them VIP tickets to the Taste The Change Fest. On May 11, we launched a microsite dedicated to the event that contained a countdown and sweepstakes messaging.

We invited a group of NYC Social Influencers and Fantographers to the event as VIPs in hopes they would talk about the brand favorably to their communities. As a bonus, we added a few of their selfies with Jason Derulo to the billboards and tweeted the links.

Hosts and social media influencers Brian Fanzo, Vincenzo Landino and Sunny Lenarduzzi invited viewers to visit their local Applebee's locations to #TasteTheChange. They cut to other influencers who were at restaurants in cities around the U.S. International viewers from Bangkok, London, Scotland and many others tuned in, making this a worldwide social media event. There were 19 total mobile livestreams from all over the country - all unscripted and all embedded into a live feed on Applebees.com. This may sound risky, but we believed in these new menu items, so we were OK with letting people give us their real time, genuine opinions to everyone tuning in.

For the entire length of the campaign, Word-Of-Mouth impressions were over ONE BILLION and restaurant traffic surged significantly increased during these activations. Here's how it stacked up overall:

- On the day of the event, the Taste The Change Sampling event garnered over 227MM Word-Of-Mouth impressions and 39.5MM in reach

- 69.2MM Word-Of-Mouth impressions (more than double that of all Applebee's competitors combined) on the day of the Taste The Change Fest

-An additional 15,000+ viewers were able to virtually experience the event through Applebee's live mobile broadcasting

-The #TasteTheChange sampling event had more than 80,000 RSVPs on the Facebook event page 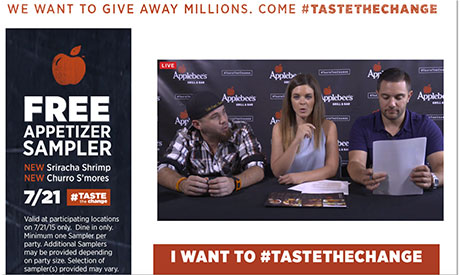