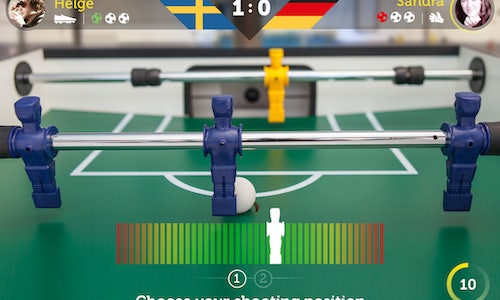 Entered in Most Creative Use of Technology

LIDL, the leading grocery retailer in Europe wanted to transfer their key message - exciting and successful shopping - from local stores into the digital world. And, as an official FIFA partner in 2014 they set out to place it in the context of football.

In every world cup emotions run high, especially during penalty shootouts. But sadly, there's little fans can do to influence the moments of decision. The truth is, they are relegated to being spectators. Recognizing fans desire to take action, we created the Lidl Fan Cup: "Play online. Shoot offline."

The Lidl Fan Cup was an enormous European foosball tournament. It was aimed at all football fans and Lidl Facebook Fans alike. Our goal? To transport the emotions of shopping at Lidl by letting fans experience the scoring of a goal for their own country.

In a 6-week tournament, fans from 23 countries engaged online, shooting offline on real foosball tables. To bring our idea to life, we did something never done before. We engineered 50 electromechanical, web-connected foosball tables.

In order to control the game, we developed a Facebook web-application. No installation and no plugins were necessary, letting fans play against each other for their own countries from any location and any device.

Over 10 Minutes player engagement. An increase of Fans over 500.000. The campaign earned 100-Million-Media-Impressions and 4-Million Euros in coverage. Lidl branded arenas generated 120.000 hours of branding.

The 50 tables, each with 2 playing fields, were branded with 25 Lidl product lines. After each move the playing fields were randomly switched. The banners were displayed as Arena Brand Names 2 seconds before the game started. The Intro of each replay included 25 different camera flights over the foosball tables. The replay itself showed the branded banners, which were visible for 6 seconds from three different angles. And at the end of the score, once again the arena brand name was displayed. Some countries additionally displayed Facebook-user targeted Intros with special brand cooperations. Finally, every user saw advertising for 84 seconds per game, but this was only seen subliminally and not perceived as actual advertisement, because to soccer fans are used to arena brand names as well as branded banners.

The 50 tables, each with 2 playing fields, were branded with 25 Lidl product lines. After each move the playing fields were randomly switched. The banners were displayed as Arena Brand Names. Some countries additionally displayed Facebook-user targeted Intros with special brand cooperations. Finally, every user saw advertising for 84 seconds per game, but this was only seen subliminally and not perceived as actual advertisement, because to soccer fans are used to arena brand names as well as branded banners.

In order to promote the Lidl Fan Cup, we documented every step of the development process and created 40 hours moving material and a huge collection of images. Everything was uploaded to a special content platform only available for press and media.

Lidl Italia hosted a massive PR event at the San Siro soccer stadium in Milan. Special Guest was the former Italian world cup winner and AC Milan star Fabio Grosso. During the press conference Lidl presented the world cup 2014 product range and the Lidl Fan Cup together with the testimonial. For this event a table was placed in the stadium and the media played against Fabio Grosso.

Bulgaria invited the current women's world foosball champion, Ekaterina Atanasova, to visit the arena with an entourage of TV and local News media experts. She played against the journalists, but also against strangers in the tournament. And of course she won some games for her country.

After testing and prototyping we started the analysis and chose third parties to help us with the serial production of 52 tables.

This was not an ordinary project for an agency, because it isn't just an application or a Facebook app or just a website. We had to use real hardware and machine controls to operate 50 tables with100 fields including steered motors. We implemented micro controllers that directly programmed hardware motors and read the sensors.

All in all, the software is a multi-layered construction. On the one side we had the web application, so the Facebook app, and then on the other side the tournament controls, where the tournament process is steered. Here the results for every game are collected.

They are intertwined and independent of each other, everything has to work together in order to create the overall effect, thus making it more complex than the usual applications. Using video technology is also not common for such a project. A database is included, which records all current scores and results. Then we also have the table controls, so 50 tables and 100 playing fields that need to be coordinated and reserved.

We made live film footages of the games, video recordings that are transferred to an asset server into the application and additionally equipped with trailers. Only a maximum of 10 seconds passed between the recordings and the viewing of the reworked videos.

In the arena we installed continuous LAN wiring between all tables and video recorders, which means all devices are available via standard LAN/ Internet. This means we actually had 50 tables and Internet wiring with routers and switchers. The infrastructure resembled a LAN party. 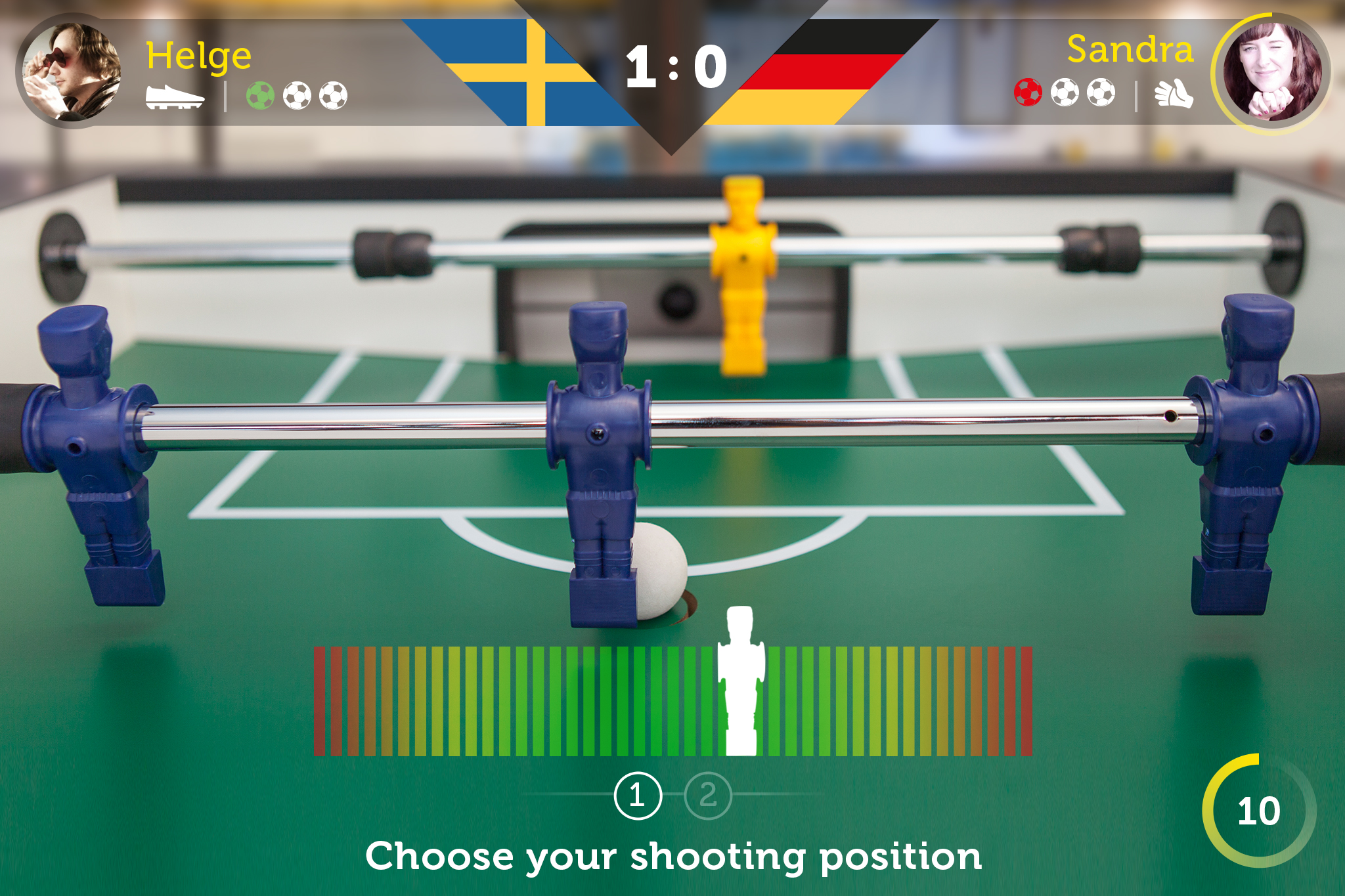 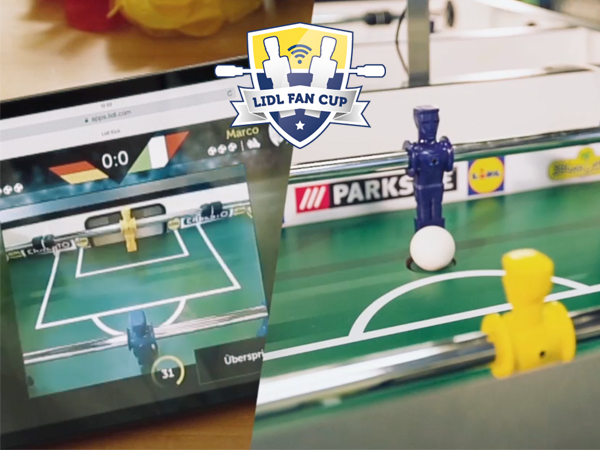 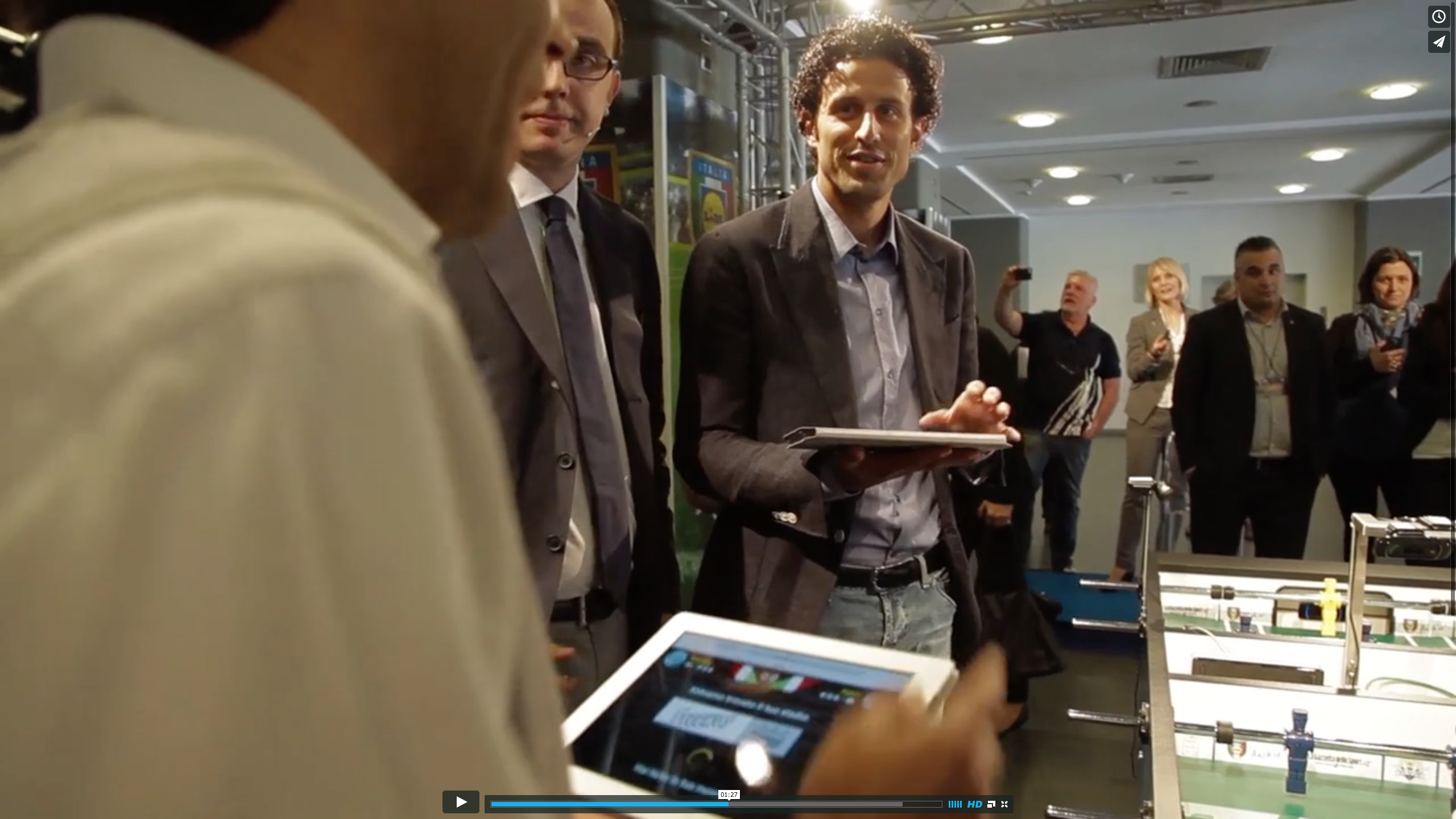 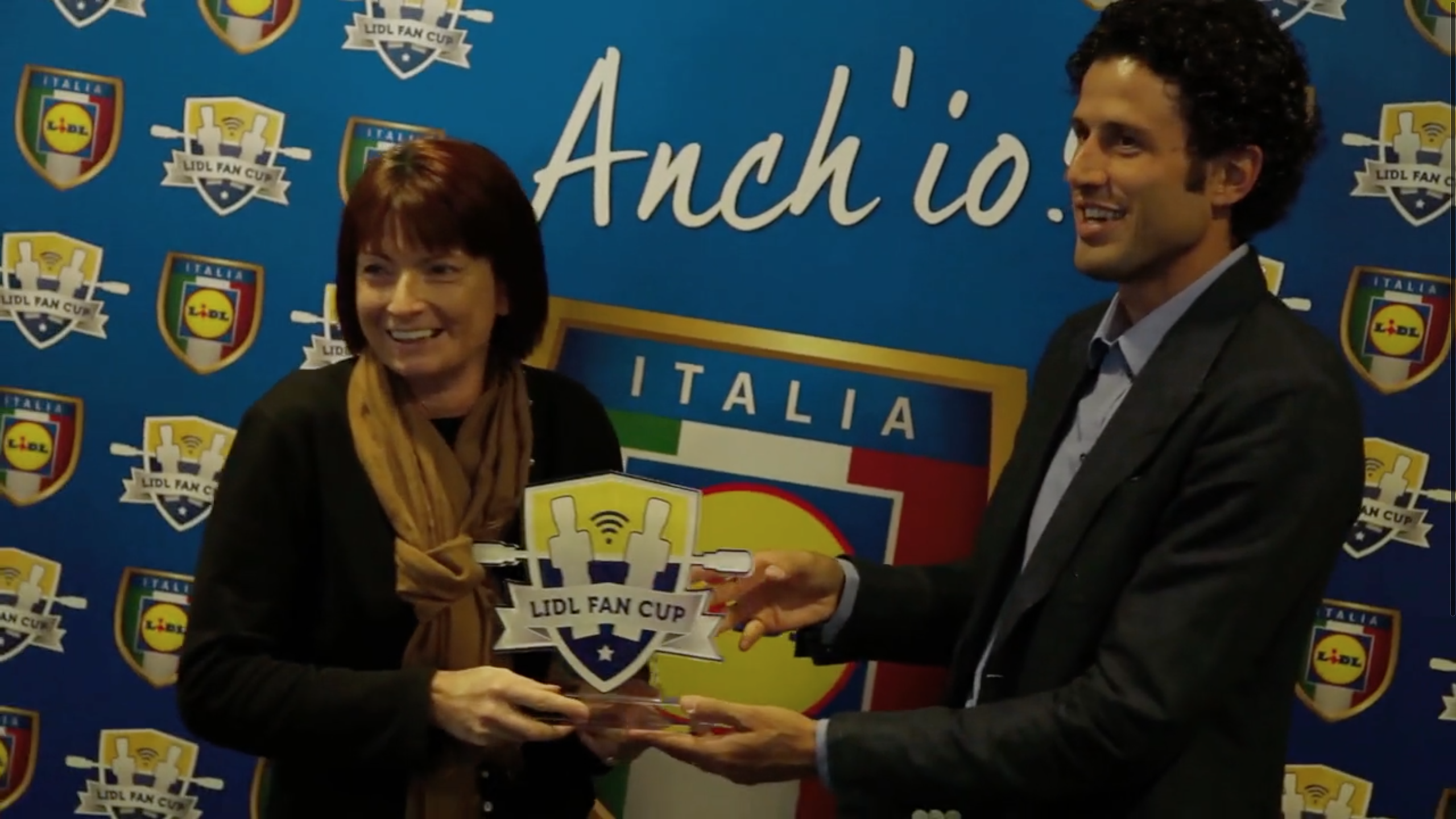 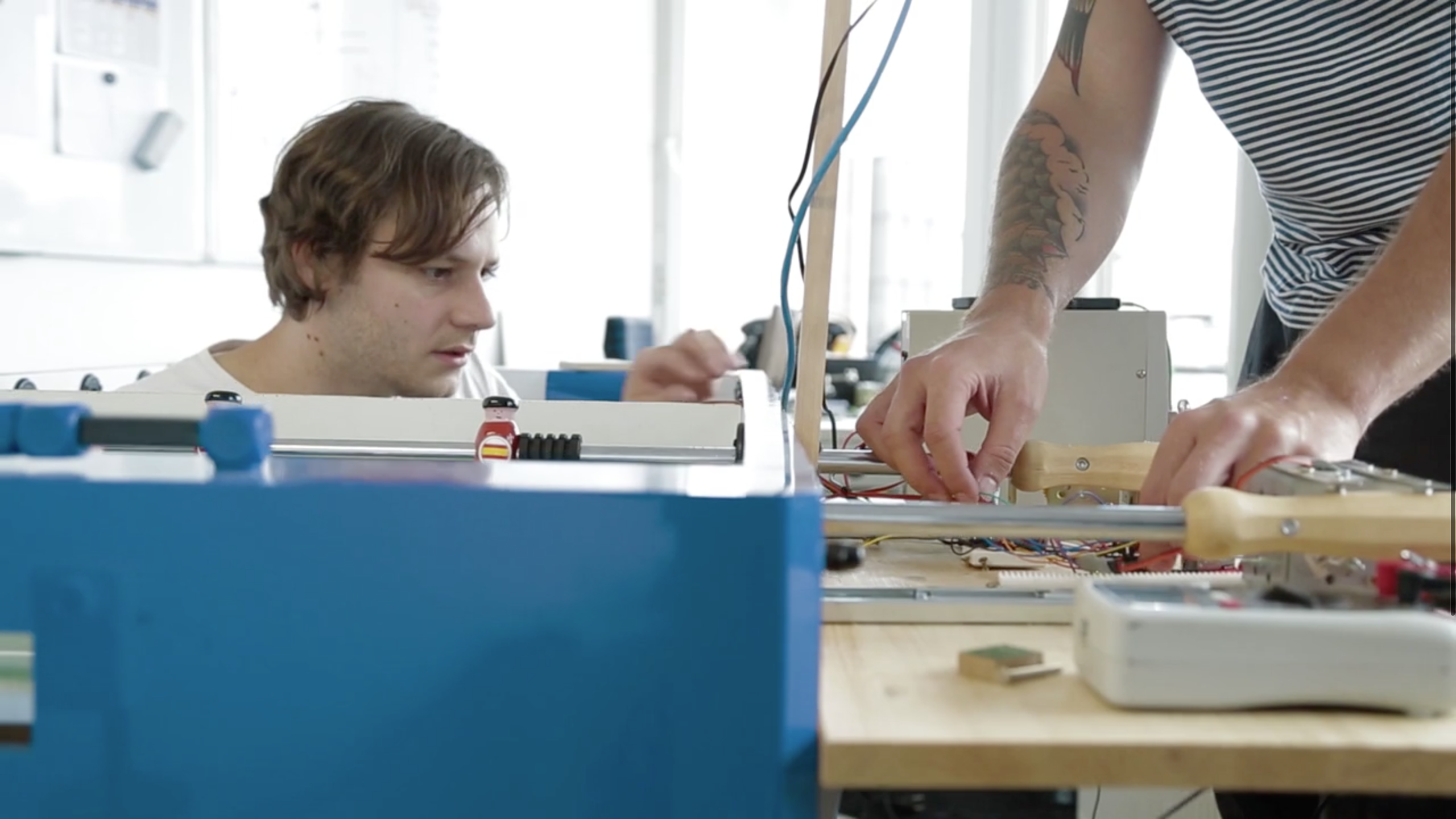 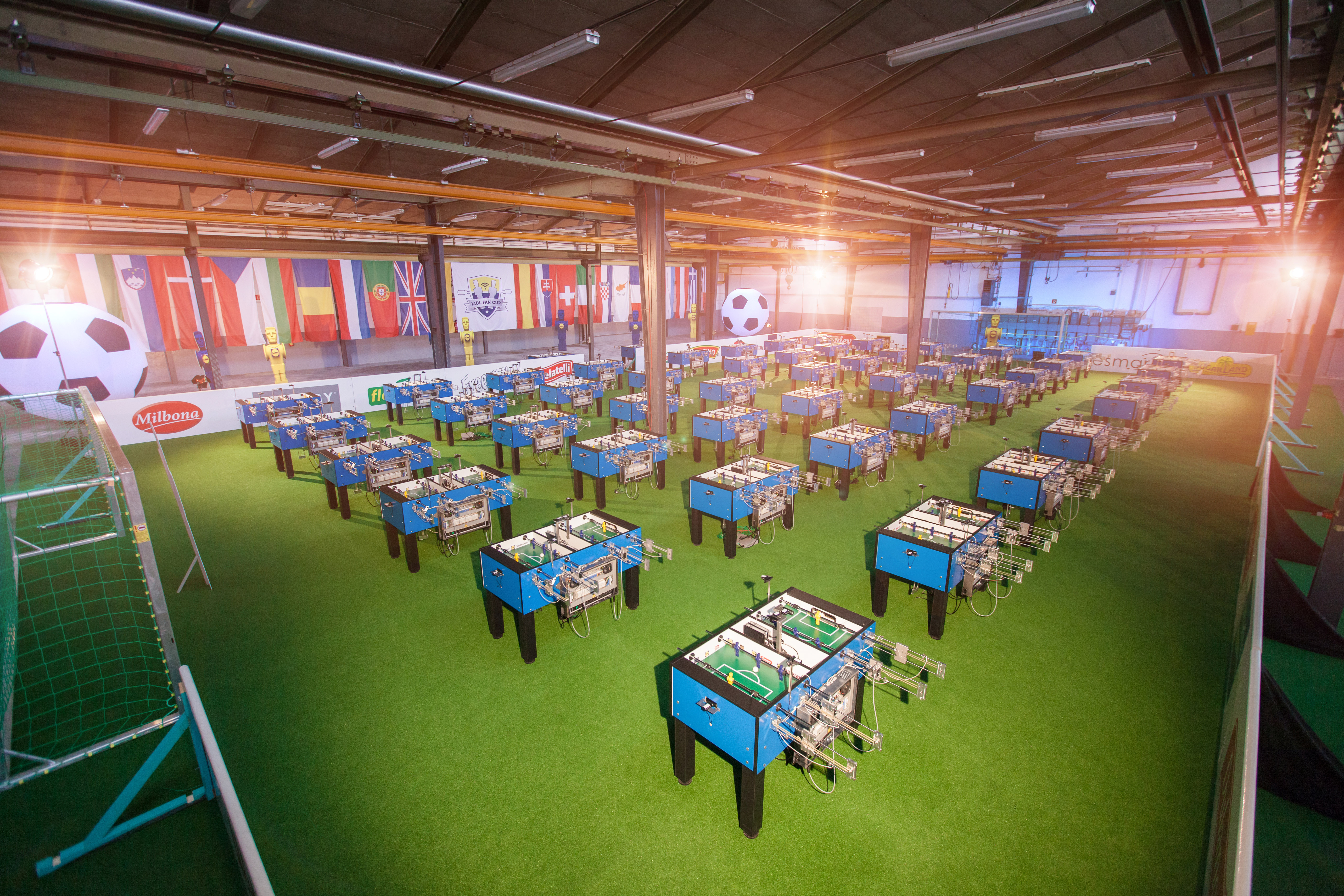