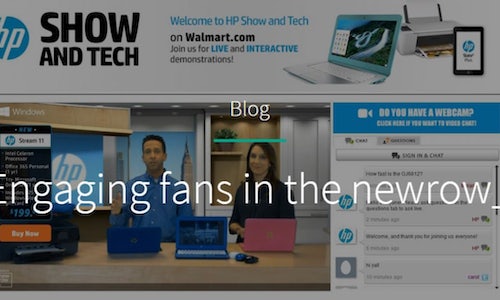 HP looked to newrow_ for a solution. newrow_ helped HP make its existing shopping channel on Walmart.com come to life with an interactive live video streaming ecommerce show hosted several times throughout the year, "HP Show and Tech." The campaign was designed to provide customers with a live "show and tell" type experience that replicated an in-store product demonstration.

This gave HP the opportunity to consistently reach consumers globally while still providing the same personal level of interaction that would be provided with an in-store promotion. Viewers and participants had questions answered instantly during the show in a fun, engaging way that kept them engaged and tuned into the program.

Every week, Walmart welcomes over 200 million customers through the doors of their 10,000+ stores and even more hit Walmart.com for their shopping needs. Walmart has hundreds of brands available to customers, especially in the consumer electronic space. Rising above the "noise" of other brands and capturing new audiences was a challenge that HP took on.

By harnessing the combined power of social media and future-forward video e-commerce tactics, HP created a personalized way for each customer to learn more about the electronic products they're interested in to further guide their purchasing decisions.

This campaign is unique because it connected viewers in real time with consumer electronic experts, allowing them to become guests on the show via their webcam, submit questions through Twitter, participate in live polling and interact directly with HP. On average, 42 percent of viewers engaged during the broadcast and participated in the chat, questions and social stream portions of the program.

Based on what they were learning through the show, HP also made it possible for customers to directly purchase products on Walmart.com during each show. This drove consumer brand engagement and sales, and provided HP with real-time consumer insight and feedback on their products to help them further refine their technology offerings.

Through the integration of a real-time social media stream within live video shows and manual culling of comments and questions via Twitter and Facebook interaction, HP amassed over 185 million impressions to the #hpshowandtech hashtag. Additionally, 31 percent of all viewership came from mobile and tablet devices supporting the trend of multi-device consumer-to-brand video engagement.

Overall, HP's embedded page on Walmart.com trafficked nearly 220,000 unique views throughout the series, reached 425,000 viewers on network with the targeted media buy and had over 80,000 unique shoppers watch on-demand videos and content throughout the year.

HP Show and Tech should win this award because it creatively engaged hundreds of thousands of viewers and directly tapped into a customer base that HP and arguably many other consumer electronic brands struggle to connect with beforehand.

Over the course of two pilots and five episodes spanning December 2013 to November 2014, #HPShowandTech amassed 425,000 viewers, 15 million impressions on Facebook and Twitter, and engaged an average of 42% of its viewers during each broadcast. 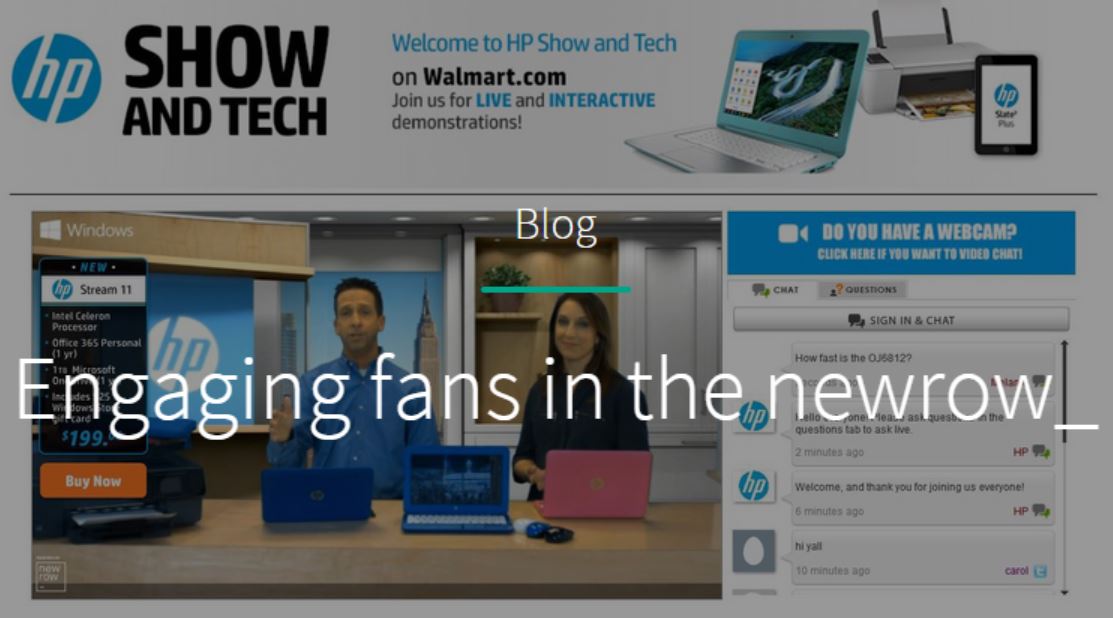