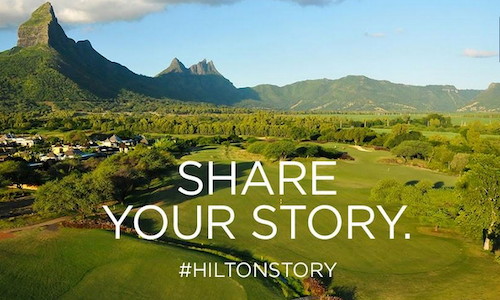 Hilton's: Our Stage. Your Story. #HiltonStory

Background: With over 560 hotels globally, Hilton is a household name and recognized as an industry leader. With nearly 100 years of experience in hospitality, Hilton has been the world's wingman for generations. Every day our guests are sharing their stories with us whether it be exploring a new city, playing photographer, eating something they can't pronounce or embracing a local custom. We wanted to thank travelers for sharing their stories with us and reward them with more nights to keep seeking adventure. We know that every day, everything we do is setting the stage for guests physically and virtually. Because while it may be our stage…it's their story.

Objective: To increase our social engagement on a global level.

Out of all entries, ten participants were selected to win 2 free nights to stay at any participating Hilton Hotels & Resorts property of their choice.

Results: The campaign ran from July 2014 through October 2014 generating over +18.8 million social impressions. #HiltonStory was mentioned +5.5 thousand times on Instagram and Twitter. Once the campaign was over, the total number of earned media impressions was calculated and totaled +21.3 million. Additionally, the winners and other Hilton community members continue to use the hashtag during their travels, when they stay with Hilton, even though there is no longer a contest incentive.

This was Hilton's first fully integrated social campaign and first user-generated marketing campaign. The campaign was activated in multiple languages and connected guests across 177 countries through their love of Hilton hospitality and wanderlust.

The beauty of this campaign was that it was simple, low-barrier and nostalgic. We weren't asking guests to do anything different than they typically would while traveling – capturing their best moments and sharing them on social. We tapped into a popular habit and connected it back to Hilton.

The amount of UCG submitted helped us gain even further insight into our fans and followers, by visually showing us how, where, and with whom they like to travel. The #HiltonStory pool of photos even served as a forum for travellers to connect with one another over shared experiences and passions – an unanticipated success. Entrants began building relationships with one another, which influenced them to participate further and continue to engage with us and other users.

The campaign garnered such great engagement that the campaign, "#HiltonStory Thanks" was launched in response. We selected and shared the best imagery onto our channels and even created video ads showcasing the UGC collected throughout the duration of the campaign.

The hashtag is still being used organically. The campaign ended, but the concept is evergreen. Stories never stop being written with Hilton. We all get a turn with a pen. Helping the world find new experiences and tell new stories isn't just what we do; it's who we've always been. #HiltonStory

Video for Hilton's: Our Stage. Your Story. #HiltonStory