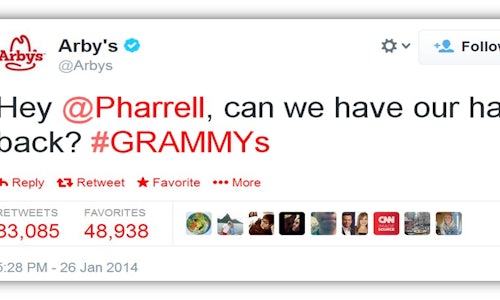 ADWEEK said it best, "Arby's Slayed the Grammys with This Tweet About Pharrell's Hat."

In early 2014, the perception of the Arby's brand among younger demographics needed a boost. Concerned about losing relevance among its core audience and a lack of recognition with younger guests, Arby's sought to re-introduce and re-position itself by inserting the brand into current pop-culture conversations and events through social media. The 2014 Grammy's provided Arby's with the perfect storm – an opportunistic occasion to leverage the power of Twitter and insert the brand into the conversation among a younger audience.

Social media history was made that night, showcasing not only the power of a real-time marketing "moment," but how to deliver sustained brand lift by amplifying and extending that "moment" over the better part of a year. Oreo won with the Super Bowl in 2013; but Arby's took social media superstardom three steps further in 2014 with its trifecta of tweets around the year's most talked about fashion accessory – a hat – and the younger generation took notice. The Wall Street Journal recognized Arby's tweet to Pharrell as the second best pop culture moment of 2014 and also declared it as one of the top fashion moments of 2014 as well.

No one could have imagined how a single tweet could leverage the power of social and traditional media to catapult a brand into relevancy and positively impact sales.

Research revealed Arby's key growth audience was 34 percent more likely to track celebrity happenings and share it in social channels. With this insight in mind, the Arby's team developed a strategic, real-time marketing/PR plan to drive engagement around a pop-culture moment in time (the Grammy's), while also looking to extend engagement and shift overall brand perception by:

The listening paid dividends when singer/songwriter Pharrell Williams wore a Vivienne Westwood mountain hat that bore a striking resemblance to the hat in the Arby's logo to the 2014 Grammy Awards. Seizing the opportunity, the Arby's team tweeted: "Hey @Pharrell can we have our hat back?" This tweet started an integrated communications program that inserted Arby's in an ongoing dialogue with the very audience the brand coveted, sparking conversations with a new generation of guests around a pop culture topic that interested them, through a channel they were actively engaged with.

Immediately following the tweet, a social media frenzy started, culminating with Pharrell tweeting back, "Y'all tryna start a roast beef?" In an effort to strategically extend the engagement beyond the first tweet and re-tweet, the Arby's team proposed additional program extensions, including Pharrell auctioning his hat off to benefit his charity, "From One Hand to Another." When Pharrell's hat went up for auction on eBay, the team tweeted that Arby's may be interested in bidding on the hat, which it eventually did, with a winning bid of $44,100. The brand tweeted: "@Pharrell You're welcome. We're HAPPY to support a great cause & get our hat back. Good luck at the #Oscars tonight!"

To sustain the positive engagement further and follow the strategic guideline to extend conversation around the brand, Arby's created a partnership with the Newseum in Washington, D.C. to temporarily house the hat as an artifact of social media history. Arby's announced the news with a Vine video, Twitter campaign and an exclusive with The Washington Post. A VIP hat unveiling event was hosted at the Newseum featuring speeches from Arby's executives, resulting in a behind-the-scenes exclusive with The Today Show.

Engaging tweets in social media and integrated amplification extended "the Arby's moment" into a year-long campaign that helped rejuvenate perceptions of Arby's, reposition the brand as creative/innovative, and ultimately contributed to tangible business results through sales growth. 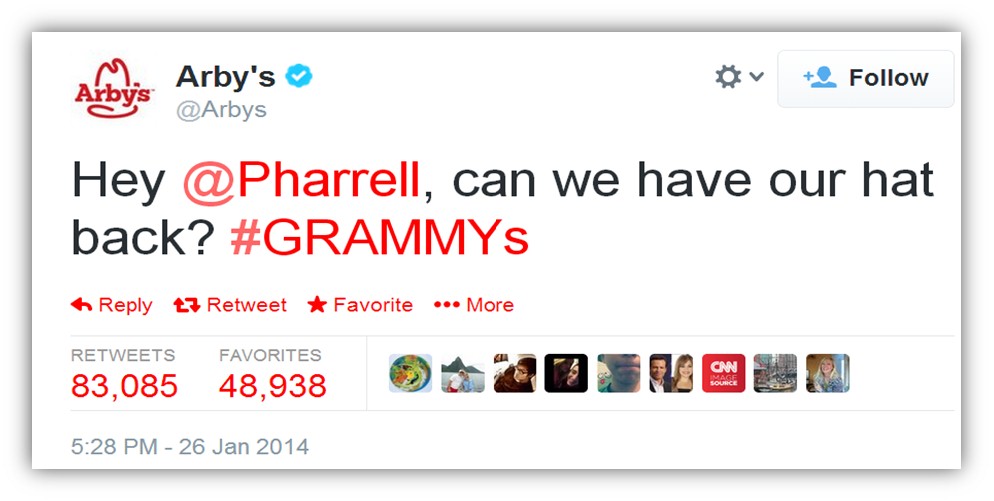