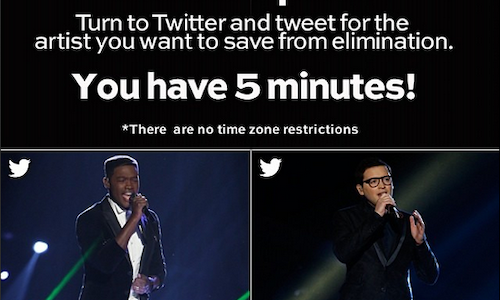 The Voice: Instant Save

The Voice hits all the right notes on-air, but what's happening on social really sets The Voice apart. The show is built from the ground up to have the most meaningful, entertaining social experience on television. Fans expect nothing less from the show that pioneered Social TV. During Season Five, The Voice introduced its latest social innovation: The Voice Instant Save, a fully realized TV/Social integration that empowered fans to significantly impact the on-air show by using social. In earlier seasons only Coaches had the ability to save a contestant from elimination, but with Instant Save now America could have its say by activating on Twitter. Here’s how it worked: each week, when the bottom three contestants were announced, the audience could choose which contestant would avoid elimination by tweeting their favorite using the hashtag #VoiceSave. The payoff was immediate, with the tallies announced five minutes later live on-air. In the past it wasn’t possible to use Twitter hashtags as part of voting. There just wasn’t a way to quickly provide numbers with absolute certainty. But by partnering directly with Twitter and Telescope, The Voice had a verifiable solution that met the expectations of the audience and the lawyers. The Result: A comprehensive, entertaining TV/Social integration that created excitement in the broadcast and unique audience engagement on Twitter. The Voice Instant Save redefined TV/Social integrations by empowering the audience to significantly impact the show by natively using Twitter. • The Numbers: According to Social Guide, the results were massive for a competition reality show such as The Voice: in just the first four episodes with Instant Save, The Voice generated almost 3.5 million tweets. And during the season, Twitter followers shot up almost 50% to 2.5 million, impressive for a show in its fifth season. • Why It’s New: Previous voting integrations for similar programs might have users register via social, or vote via methods such as Direct Message that aren’t really social. But Instant Save allowed the audience to vote using Twitter the way they actually use Twitter: by simply tweeting their selection. Previously, that simple functionality unavailable for a reality competition series to use because shows like The Voice require absolute certainty with voting results. It was only by working closely with Twitter and Telescope – the industry leader in social TV solutions – that a verifiable method was developed. • What Twitter Says: “From its first episode, 'The Voice' has pushed the boundaries between the show and the audience, using Twitter to break convention and engage fans in totally new and unexpected ways. And now, with the Instant Save, they're pushing the envelope again, giving fans at home as much power as the coaches." And: “The Voice's Instant Save will be the first time Twitter will be used for an actual voting decision during a show." --Fred Graver, Twitter Head of television partnerships • On-Air Integration: The Instant Save played out live on broadcast television. Each episode, host Carson Daly talked through the Instant Save, directed the audience to activate on Twitter, built the tension while America voted, and then announced the results live on-air. Not only did the Instant Save dramatically impact the results of the show, it actually filled a significant part of the on-air episode with social content. • Social Integration: The Internet rallied behind Instant Save. The official Voice accounts on Twitter, Facebook, Instagram, Tumblr, and Vine drove the conversation, and then fans, influencers, celebrities took to Twitter both to vote and to rally their followers. 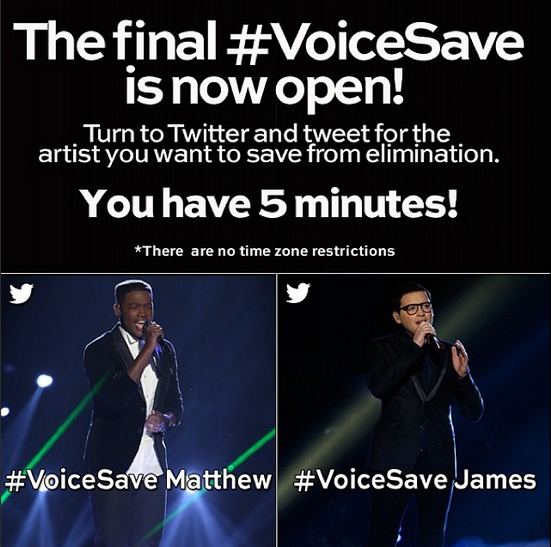