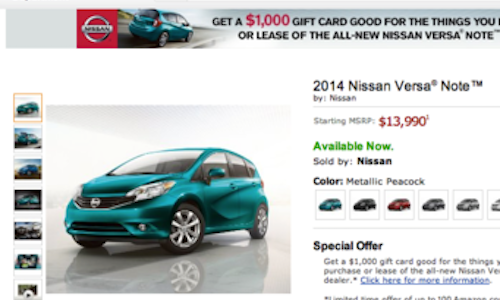 The Nissan Versa Note was a small car that needed a big introduction. So Nissan partnered with Amazon and changed the way consumers could buy a car by putting the Versa Note on Amazon.com. It was the first promotion of its kind in the world. The cars were gone in just 3 days. But we weren’t finished yet. We then made one special delivery in the manner that Amazon customers are accustomed to: we put the car inside of a cardboard box, creating the biggest Amazon box ever made. As the box made its way through Madison, Wisconsin, a bystander took a picture and posted it on Reddit wondering what Amazon could be delivering that was so big? It got everyone else wondering too, the story quickly becoming the #1 trending topic on Reddit. Even Jerry Seinfeld took a break from his “Ask Me Anything" to comment, wondering if the box was real or a hoax? The story leaped from Reddit and spread across the rest of the internet with everyone from the Huffington post to Buzzfeed asking the same question: “What’s in the Box"? Finally, Nissan revealed the contents of the mysterious box and released a film that documented the now famous delivery. The campaign was covered in 35 countries and on 5 continents making it a story that was almost as big as the box itself.In 2013, Nissan was looking for a big way to introduce the all-new Nissan Versa Note to the market. We decided to partner with Amazon to change the way consumer could shop for a car by putting the Versa Note on Amazon.com, which was a first of its kind. The offer was gone in just 3 days. We decided we couldn’t stop there. We then made a special delivery by delivering the Versa Note in a giant Amazon box. As the box was being delivered in Madison, WI, a bystander snapped a photo of the box and posted it to reddit. Within hours, the post had generated: - 60k reddit upvotes - Over 4k in comments - The photo even had Jerry Seinfeld talking about it in his reddit AMA. Without any paid promotions, everyone on the Internet from Huffington Post to Buzzfeed started to talk about the box and was asking one simple question, “What’s in the Box"? The story of the box was covered in 35 countries and on 5 continents, making the story of the box just as big as the box itself. Once we went live with the video, the buzz only increased when we went back to reddit it to thank them for sharing the video and showed them what was inside. The conversation then shifted from asking what was in the box, to “What would you do with the giant Amazon Box?" This garnered: - Over 26MM impression - 88k Clicks - 928 comments. The video itself took off on the Internet gaining over 390k in views on YouTube. The amount of buzz we received well exceeded our expectations. This multi-channel campaign (Facebook, Twitter, reddit) continues to be talked about to this day on social platforms and in news outlets and successfully tackled an uncharted territory on social, the reddit community. And it all started with a first of it’s kind, selling the Versa Note on Amazon.com. 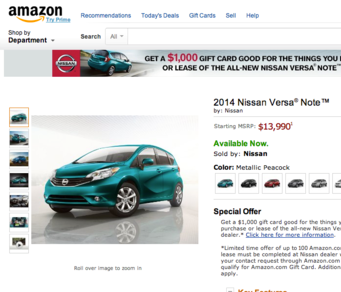