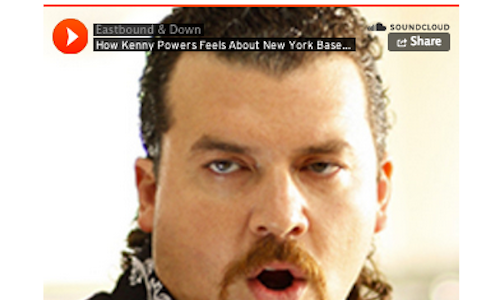 In support of Eastbound & Down’s final season on HBO, we gave fans totaling in the six-figures a most memorable reminder that Kenny Powers is back and badder than ever. Timed with the climax of a highly competitive MLB season, we ushered KP back to the zeitgeist in a big way: by broadcasting his personal insults to unsuspecting baseball fans. Publishing his bits of trash talk as Soundcloud clips and serving them directly to MLB fans on Twitter, we gained over 100,000 plays and made a major impression that Kenny wasn’t retiring from being awesome anytime soon.Before this stunt, fans of Kenny Powers had to tune into HBO to hear his most epic burns. In support of the Kenny’s swan song, were able to collaborate with Eastbound’s writer/star Danny McBride to extend the character’s voice to social media and give him a topical spin for the very first time. Though Kenny is no stranger to trash talk, these insults were written to directly send up specific teams’ ridiculous fan behaviors, “each one more ridiculous and outstanding than the next," according to Uproxx. Taking this approach, we made the recipients feel as though Kenny was onto them personally. The trash talk was served up in a most disruptive way, entering the feeds of the ample sports audience on Twitter. Working alongside analytics agency Mashwork, we isolated the keywords most used by fans of the 14 specific teams who we deemed to have the most social followings. Using these terms within Twitter Ads’ new Keyword Targeting product, we were able to hypertarget fans that were tweeting about their teams (or rivals) and “reply" back to them with an insult at key points during games. Choosing to place the clips on Soundcloud gave fans a seamless listening experience, as insults flew straight from an embed within a Twitter card. Whether following on a mobile phone or desktop, users were treated to a personal message without ever having to leave Twitter. Additionally, we surprised and delighted fans on the Soundcloud platform with this never-before-done stunt gaining positive comments and buzz on each of the sounds. 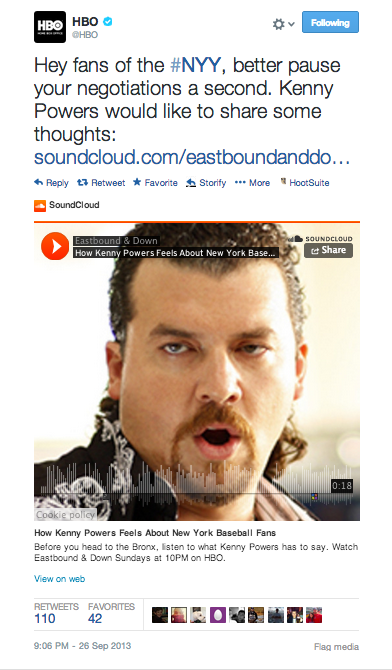