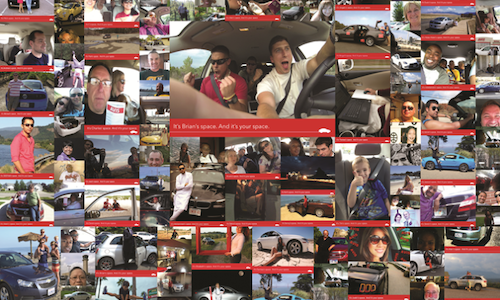 AVIS had just launched its newest US ad campaign called “It’s your space". The three ads featured celebrity ambassadors; PGA pro Steve Stricker, Volleyball star Gabby Reese and photographer Nigel Barker. Each were depicted in their AVIS rentals telling their AVIS rental stories. AVIS knew their current Facebook community was small but wanted to grow it by engaging their customers first. While using tactics like ‘open-to-all’ sweeps which would likely drive large acquisition numbers, AVIS wanted to put customers at the center of the experience and demonstrate their commitment to quality experiences in a somewhat commoditized marketplace. 1000heads were briefed to find ways to bring the ATL campaign to life across social media channels and encourage AVIS customers to tell their own rental stories and start a relationship with AVIS on Facebook. Using the “It’s your space" strapline and visual treatment as our inspiration, 1000heads developed an integrated social experience that inspired AVIS customers to share pictures of themselves on roadtrips across America with their AVIS rental vehicle for a chance to win a ‘permanent upgrade’ BMW 3 series. We built a custom app to dynamically generate the ad strapline, “It’s your space" and campaign look and feel over each uploaded image and allowed the community to vote and share their favorites. Friends, colleagues, families showed their brand love and shared some amazing moments from their AVIS rental experiences. Each submission effectively became an AVIS campaign ad. Each told a personal customer story – wherever they were currently travelling. We extended the reach of the campaign by creating digital takeover assets for AVIS.com, AVIS email blasts. We also created campaign toolkits for AVIS staff to promote the campaign across rental locations across the country. After a month’s promotion, the winning picture was handpicked by celebrity photographer Nigel Barker. The winner (a schoolteacher called Brian) was delivered the news personally by the AVIS CMO in a phone call that was filmed to capture that surprise and delight moment. The winning photo also became AVIS’s Facebook cover photo for a week. Kate Stanley, Social Marketing Manager at Avis, had this to say: “This was our first customer first engagement strategy in social media and the stories generated help present the brand in a new and fresh way. We were overwhelmed with the richness and diversity of our customer’s stories. Overall this project was a real success and we were very pleased with the results - surpassing our social goals for building our community and achieving over 10,000 Signature Series reservations." Over 10,000 customer images were shared through the app (and many more on the AVIS newsfeed), amassing over 35,000 likes, votes and shares – generating over 41 million social impressions in the US. This user driven activity created significant growth on AVIS’s social channels with 450% more Facebook ‘likes’, with an increase from 14,000 to 75,000. It’s your space was significantly more engaging than any competitor activities in social (over 10x the average), with 5x higher engagement levels to AVIS’s closest competitor. The campaign was AVIS’s most successful program to date growing the US channel into the best followed and most engaged AVIS social channel across the globe. Over 10,000 Signature Series rentals were attributed to this activity, representing a ROI of over 20X the campaign spend. This campaign drastically exceeded targets and engaged a previously passive audience in a purposeful way that made a difference to sales. 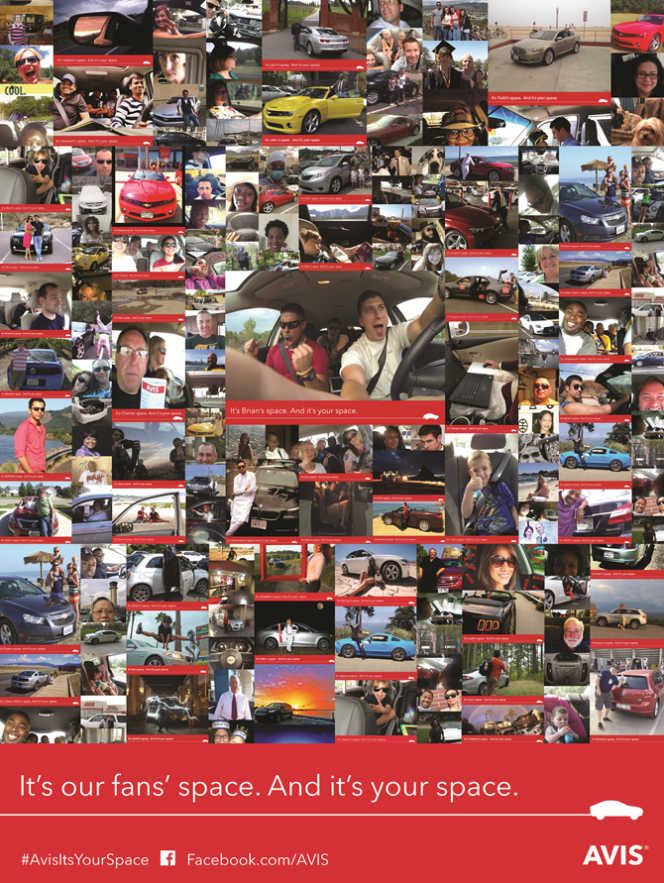