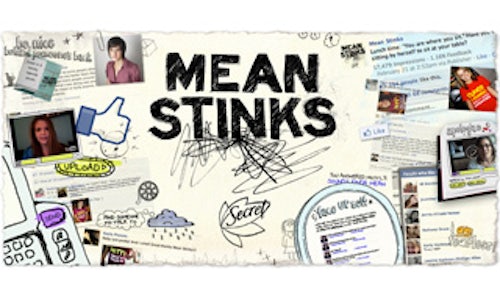 For teen girls worldwide, bullying isn’t a buzzword. It’s real. So why are girls mean to other girls? Secret, a brand whose purpose is to make women more fearless, asked that question and decided to make a difference. Secret came to imc² to create a social experience for its program called "Secret Mean Stinks": a statement of activism encouraging an end to girl-to-girl meanness. imc², in conjunction with Leo Burnett, Marina Maher Communications, Starcom MediaVest Group and iProspect, created a Secret Mean Stinks Facebook application to bring the program’s messaging to life. The focus of this program was directed at teens aged 13-17. Teens’ role models (women 18+) were also targeted to be a force for change. The Facebook program launched in early 2011 with three overarching objectives: • Help girls become more confident and grow up to be fearless women • Create brand affinity for Secret among young women • Create a safe hub for conversation The Facebook application includes the following: • 'Apology' section that provides a way to upload text and videos to make amends • 'Good Graffiti' area that allows users to say something nice behind someone’s back • 'Face Yourself', which allows users to analyze their Facebook posts in an effort to gain self-awareness • 'Sticky Situations', a place for users to pose questions they want Secret Mean Stinks to address Specific page tabs also highlight the brand’s purpose for the program, recognize program partners, and provide crisis hotline information. Also, the Facebook wall was used to surprise fans that were helping to make a difference by rewarding them with Secret Mean Stinks t-shirts. Campaign Performance & Results: The campaign struck a chord with women of all ages. In one day, Secret increased its collective Facebook fan base by more than 203,000, making Secret the second-fastest growing Facebook page globally that week. This purpose-driven program had a tangible effect—it started a movement of nice and it met its objectives. When the Secret Mean Stinks Facebook page launched, women of all ages opened their hearts with unprompted apologies on the Secret Mean Stinks wall. Hundreds more offered up apologies. They shared compelling stories and poetry. They offered one another support. They had fun sending good graffiti. It was a social campaign at its best—they made it their own. Additional results: • To date, the Secret Mean Stinks page has 337,000+ likes. Secret has over 1.3 million. • Women have read or watched 50,000+ apologies and sent 30,000+ pieces of good graffiti. • Facebook media increased brand favorability by 6% (Source: Brand Effect Campaign Effectiveness Study by Nielsen, February 2011). • Media drove over 85,000 click-throughs to Secret and Secret Mean Stinks pages. • 339,000+ engagement interactions from Facebook media units, including 18,000+ video plays and 40,000+ poll responses. • Secret Mean Stinks page generated over 1.3 million organic profile and newsfeed stories.

Please visit www.awardshow.us/meanstinks to view a brief synopsis of the Secret Mean Stinks Facebook campaign, including screenshots and a video demonstrating the page in action. 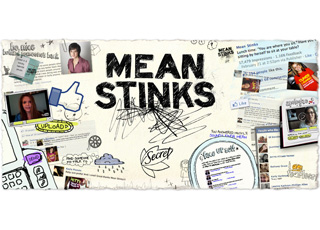