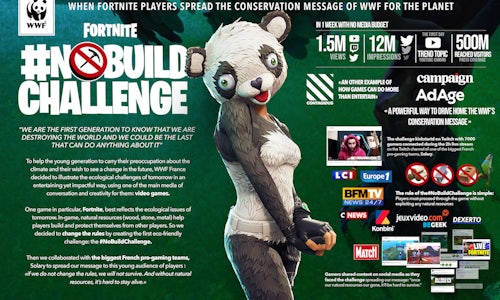 The depletion of the earth's natural resources is a major problem which humanity must fight against to save the planet and its inhabitants. Yet every year we continue to use more natural resources than the earth is able to offer.

Today some active young citizens who will inherit the planet left by the older generations are determined to make their voices heard. Following in the footsteps of the young Swedish activist Greta Thunberg, students all over the world have been actively protesting in the streets during  the past few months in support of the anti-climate change movement. They are united by the hashtag #FridaysForFuture and aim to spur our governments into action – but not all young people have the same awareness about the environment.

WWF France decided to help them take action and to carry this message loud and clear among them.

Young audiences are notoriously difficult to reach with traditional advertising. As they don’t react well to top down or intrusive brand messages, we chose another way to engage them where they are: within the Fortnite game they spend an average of six to 10 hours on each week.

The #NoBuildChallenge taps into behaviours of gamers who naturally create and share content: rules and tips of the game are conveyed by fellow gamers, conversations naturally occur in friends-chats and on gaming stream websites such as Twitch or YouTube. The partnership with prestigious gamers like the Solary team encouraged gamers to share content on their social feeds. And because the challenge was difficult to achieve, it was even more rewarding for the successful gamers to demonstrate their skills while communicating WWF’s message: if we do not change the rules, we will not survive. And without natural resources, it’s hard to stay alive.

- The #NoBuildChallenge campaign was kickstarted on April 5 on the Solary Twitch channel, one of the biggest French pro-gaming teams with 740,000 followers, before being broadcasted on Youtube.

- The Solary gamers then invited their audiences to challenge their best scores and raise awareness of ecological emergencies amongst their peers.

- More gamers followed suit, uploading footage their attempts to take on the challenge on social media, creating a snowball effect. Thanks to the comments section of the different social-lives, audiences were able to interact with streamers to share their vision of our ecological issues. Viewers and players were getting informed about WWF missions and sharing how they can change their behaviours to protect our planet.

- Live games and recorded content will be broadcasted until Earth Day on April 22.

- Over one week and without any media investment, the #NoBuildChallenge generated no fewer than 1.5 millions views on YouTube. #NoBuildChallenge was the number on trending topic on YouTube Gaming France on launch day, with hundreds of young streamers taking up the challenge.

- This challenge resulted in a long term partnership between Solary and WWF. And in June, when the team Solary wore the colors of WWF during a Grand Epic Games tournament , the E32019, and finished big winner, they collected in one evening 1 Million dollars for the NGO! 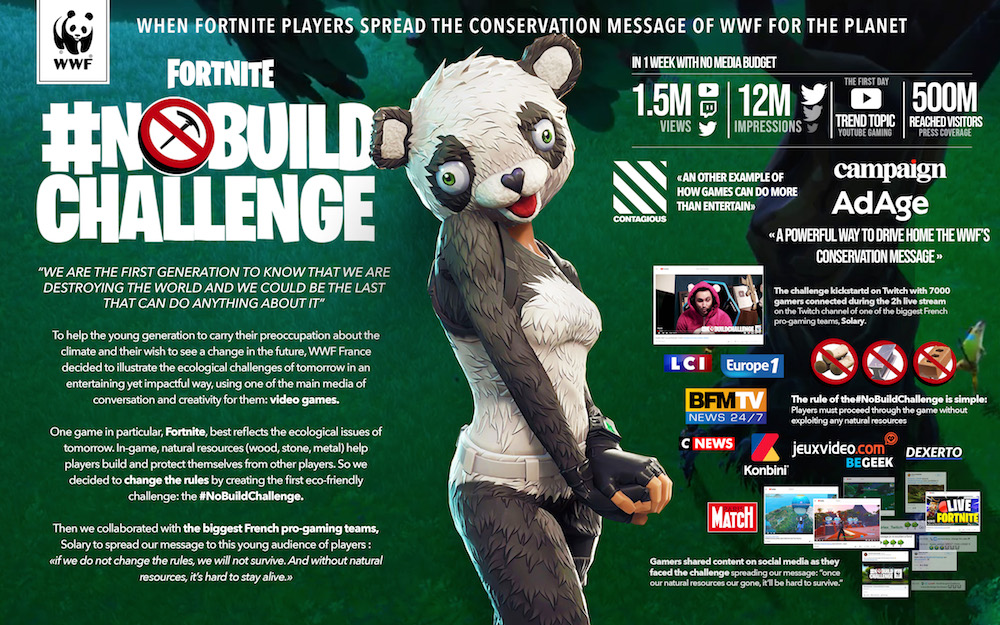 We Are Social, WWF FRANCE