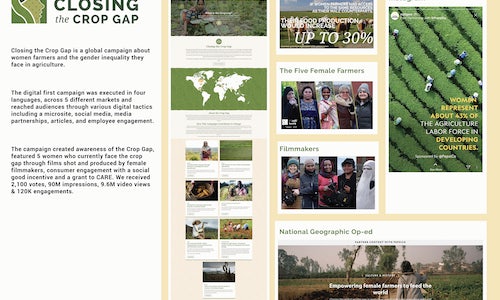 Through “Closing the Crop Gap,” we set out to raise awareness about issues related to the Crop Gap, highlight the importance of closing it, create content that evokes an emotional connection with our audience with an incentive for them to help be part of the solution and increase awareness of the brands involvement with sustainable agriculture, our commitment to empowering women and the action we are taking through grant to CARE.

Because this is a global issue we featured women from around the world – India, Poland, Egypt, USA and Guatemala and created a global campaign that is multi-lingual and multi-market.  We also partnered with CARE, an NGO that is already doing work in this space.

Our strategy was to raise awareness and create a shared purpose with our audience that inspires them to take action on a critical issue about gender inequality. Our approach was to feature voices other than ours, mainly the women that were impacted by this issue.

We worked with CARE and Food and Agriculture Organization of the United Nations to further research this issue and developed a campaign that was rooted in scroll-stopping stats and real voices. We strategically limited branding and our corporate voice and let the story of these women shine. In addition to highlighting women farmers, the filmmakers we hired to for each film was female.

We wanted to give a platform to women who typically wouldn’t be heard so we built the concept around 5 women farmers and their stories. The idea was to demonstrate the crop gap through the lens of these women. To tell their stories, we worked with female filmmakers to shoot and produce the videos.

We executed the campaign in three phases, beginning in February. In phase one we created awareness about the Crop Gap. In phase two we launched five videos, each about a woman that currently faces the Crop Gap & asked consumers to vote on the videos. For voting, a consumer received a $25 credit to Kiva.org.

We executed in multiple markets and in multiple languages. Our microsite functioned as the hub for the entire campaign and during each phase we leveraged paid, owned and shared media. Specifically; a media buy with National Geographic, a custom Twitter ad, organic and paid social posts on owned and partner channels and thought leadership articles.

We also announced an $18 million grant to a CARE program called “She Feeds the World” and phase 3 (to be launched in Q4) will feature beneficiaries from this grant though a docu-series created by the winning filmmaker.

Overall this campaign was very successful garnering 90M+ impressions, 9M+ video views, 120K engagements and 2,100 votes. Over $11,000 has been loaned on Kiva.org from consumers that voted. We received 19 media placements with an estimated 133M+ unique monthly visits (combined) for our grant announcement and campaign coverage. The custom Twitter ad campaign called "Like to Remind" successfully drove engagement - garnering more that 14K opt-ins and outperformed CPE benchmarks by 8.5%. YouTube had a high video view rate, outperforming CPV benchmarks by 70% and almost half of the viewers watched the video for 30 seconds or more.

Video for Closing the Crop Gap