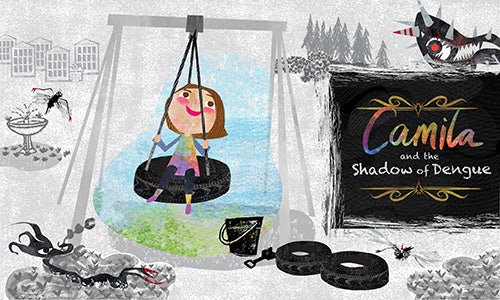 Camila and The Shadow of Dengue

2019 marked an important point in Takeda’s history as it concluded a major acquisition. Their annual Takeda Leadership Conference convened for the first time the top 400 leaders within the expanded organization to present the company’s key priorities across business units. During this crowded two-day meeting in Tokyo, our mission was to generate internal excitement around the company’s mission to develop innovative vaccines to fight infectious diseases and draw attention to the contributions Takeda is making to improve global public health. In order to be successful, we had to come up with an experience that was memorable and stood out beyond a typical PowerPoint presentation or bullet points.

Our strategy was to present something the audience wouldn’t expect at this meeting, full of corporate PowerPoint presentations. We created an illustrated world depicting the impact of dengue through the eyes of a little girl and narrated in the form of a children’s fable. The video emphasizes the stark contrast between a child’s naivete and the looming darkness of dengue, generating the sense of urgency to protect threatened communities from this mosquito-borne illness, which is one of the World Health Organization’s top ten threats to global health in 2019.

The team was inspired by Camila – a young girl living in Colombia who survived a dengue infection, and the subject of a real-life documentary video Takeda created a year prior. Her bright spirit, energy and optimistic outlook led to the creation of the little girl in the fable.

The fable mimics the cadence of a nursery rhyme and is written like a fairytale to symbolize threatening undercurrents, intense emotions and the literal elements of Camila’s dengue fever story. Stark “grown-up” facts on screen contrast the innocence of the rhyme and illustrations to create a parallel narrative that acts as a mirroring counterpart to the innocence of the child’s fable, and alerts viewers that this darkness exists in ways they might not imagine in their own surroundings.

Through animated storytelling, we join Camila on her day and notice the looming threat of dengue hiding in the shadows and its impact on her world and society at large. The video animations draw the audience in and leave us wondering what will happen to Camila – speaking to the fact that dengue is unpredictable.

The execution of the fable came together using carefully curated selections of illustration genre, animation style, voice overs and sound effects to deliver narrative drama and impact. The video opens with the familiar sound of buzzing mosquitos, surrounding the audience to the point of discomfort. These sound effects progressed throughout the fable, creating an immersive experience that became louder and more prominent up to the moment Camila was bitten by the mosquito – after which there was a deafening silence. The music and tone change from sadness to hope, for a world where people should no longer live in fear. The voiceover was strategically cast to represent a young Latina girl, like Camila.

The video was screened on a 65 x 15-foot, curved LED wall for a larger than life experience. Special ceiling lighting and sound system allowed for an immersive experience that transported the audience into an environment with a high risk for dengue.

The presentation opened with the original documentary of Camila, followed by the fable. After the fable, the business leader caught up with the real Camila, via a pre-recorded interview, who greeted all the leaders and shared her wish to end suffering from dengue. A massive selfie photo was taken, printed out and mailed to Camila to thank her for her participation and for inspiring Takeda’s leaders.

There was an overwhelmingly positive response from the audience and feedback indicated that this was the only session throughout the two days where the audience fully focused and physically leaned in toward the stage, waiting for what was coming next. The session was the most creatively advanced and memorable experience of the two-day leadership meeting.

In a follow-up survey, out of 297 survey respondents, the Vaccine Business Unit (VBU) presentation ranked the highest with 92% rating it ‘excellent’ and 7% rating in ‘good.’ The next tier of presentations came in around a 60% rating of excellent – pointing to the VBU as a clear stand out.

Feedback continues to come in, mentioning how inspired and motivated people feel after watching the video. Follow-up materials were created and are touring the Takeda offices around the world, sharing Camila’s experience with employees worldwide. The video will also be hosted on Takedavaccines.com in the coming weeks. Overall, the fable continues to inspire those developing safe and effective vaccines to combat infectious diseases around the world and protect people, like Camila and her family.

Video for Camila and The Shadow of Dengue 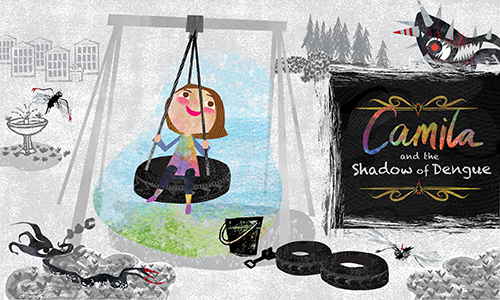