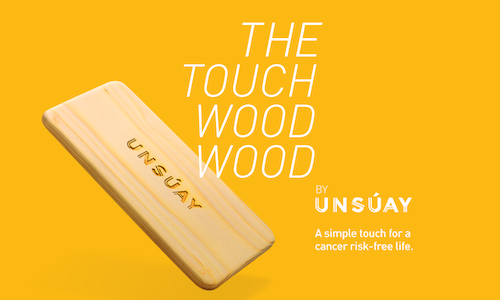 It is estimated that 1 in 4 Malaysians gets cancer by the age of 75 every year. Yet, more than 70% of young Malaysians are not insured today. To commemorate the launch of the Prudential's new PRUcancer X product, we wanted to launch a campaign that sparked a sense of urgency for cancer insurance coverage among our young millennials and Generation Z (aged between 18-30) in Malaysia.

It was quite the challenge, as cancer remains a taboo topic among Asians young and old.

What we did know, was that our internet-savvy target audience were immune to the tear-inducing and shock-and-awe tactics of typical insurance advertising.

The Insight: Superstitions are knee-jerk reactions.

It is no secret that Asian societies are a superstitious bunch. Even among the most educated, digitally connected generation, there is a persistent avoidance of taboo subjects like death and chronic illnesses, like cancer. This avoidant attitude is fueled by the belief that talking about a taboo subject invites the very thing we wanted to avoid.

So how do they react when someone broaches the topic of insurance, death and diseases?

These are the most commonly employed superstitious defenses Malaysians use to "ward off" or "reverse" the bad luck of having talked about the topic. This avoidant reaction is a huge barrier we needed to overcome in the campaign.

Strategy: We get them to laugh about it.

Malaysia's social-cultural sensibilities do not encourage a candid and frank discussion of the consequences and the possibility of a life with critical illness. Not being able to talk about it is the enemy that we want to eradicate.

To do this, we dropped the conventional 'insurance speak' and opted for a tongue-in-cheek approach to break the ice and induce a real response from Malaysians on social media.

We developed the campaign platform of "Superstitions can't cover you", delivered in a fun, upbeat, cheeky style to resonate with our young light-hearted audience. The idea was to take these superstitions to its extreme versions, in a humorous way to start the conversation around the need for coverage.

In Malaysia, the term 'Suay' is a frequently used adjective to describe a situation or person who brings bad luck. Ironically, we launched a fictitious sleek lifestyle brand online called 'Unsuay' (anti-bad luck) that sells a collection of products with cancer-warding powers.

To give the Unsuay brand a great dose of realism and legitimacy, we manufactured these products as merchandise, complete with fine-prints, disclaimers and manufacturing details. So for the first time, Malaysians were presented with the physical manifestation of their much relied-upon superstitions: the Touch Wood Wood, Choi Pin, and Suay Slapper.

1. The Touch Wood Wood - A simple touch of the wood and it will prevent any statements about cancer from coming true.

2. Choi Pin - Malaysians often spit out "Choi! Choi! Choi", a refrain meant to ward off any evil or bad luck. Now, we've got this pin that says 'Choi!' on the loop, yelling away the threat of cancer cells for you.

3. Suay Slapper - In Malaysia, when someone says something that could invite bad luck or misfortune, they reverse it with a slap on their lips. Our handy mouth slapper lends you an extra hand to remedy any suay slips of the tongue.

Knowing that Malaysians love to shop online, we took advantage of Facebook and Instagram e-commerce solutions and pushed out realistic online shopping ads of Unsuay products on social media. It looks, sounds and feels real.

We then developed a high-value production brand film that introduces the founder of Unsuay. We even produced a series of the making-of videos on YouTube that plays up how these "cancer-cancelling" products are made.

But then, we flipped the script on them, revealing the true message: Superstition can't cover you, but insurance can.

Our irreverent approach in this Unsuay campaign broke the taboo-cladded silence around the topic of cancer amongst Malaysians.

The campaign was very well received by the target audience, who applauded the twist and described the campaign as a "creative way to sell insurance". One even commented that "this is one of the best ads (he's) seen in Malaysia."

Our unconventional and kind of risky approach in this campaign successfully captured Malaysians' attention. The Unsuay products received 80% positive sentiment on social media. We even received requests from actual cancer patients wanting to buy the Unsuay products. The plot twists in the "making-of product" video clips captivated Malaysians, peaking at 6.1 million views with a 70% completion rate.

When we revealed that Prudential was behind this campaign, we continued to obtain an incredible 47% engagement rate with our social media ads. Our campaign appeared in more than 10 publications within the first week of launch and this secured us an approximately RM190,515 (~US$46,000) worth of earned PR value.

Our intention was clear - to broach a topic that no one would talk about, with an unconventional approach. Using humour and shared laughter, we managed to make the topic of cancer a little less scary and more palatable to Malaysians, getting them to voice their opinions on the taboo subject. We've also successfully demonstrated to Malaysians how easily they place their lives in the hands of superstition, giving Malaysians a true wake-up call. It was time to get real and get coverage against cancer with PRUcancer X. 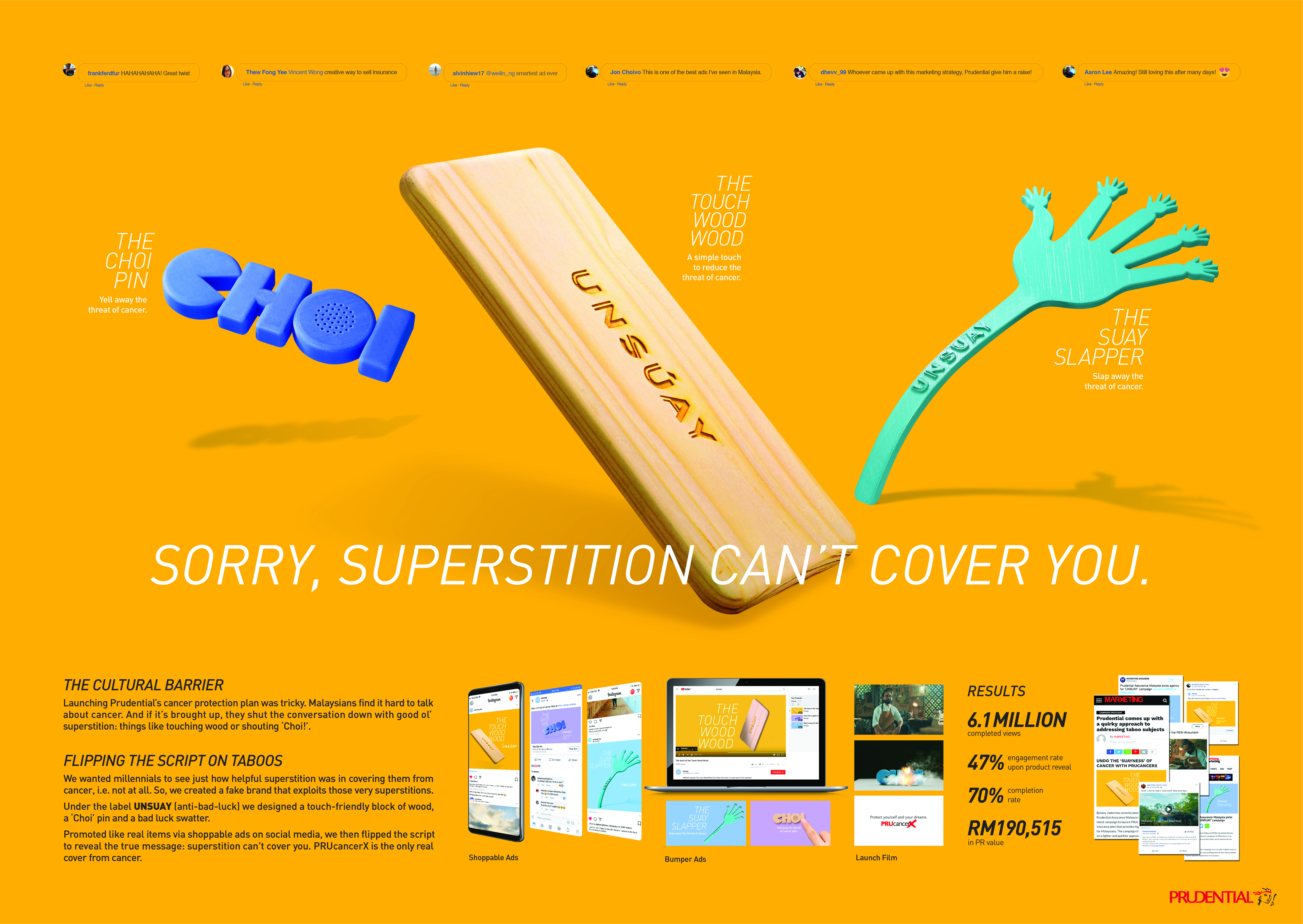 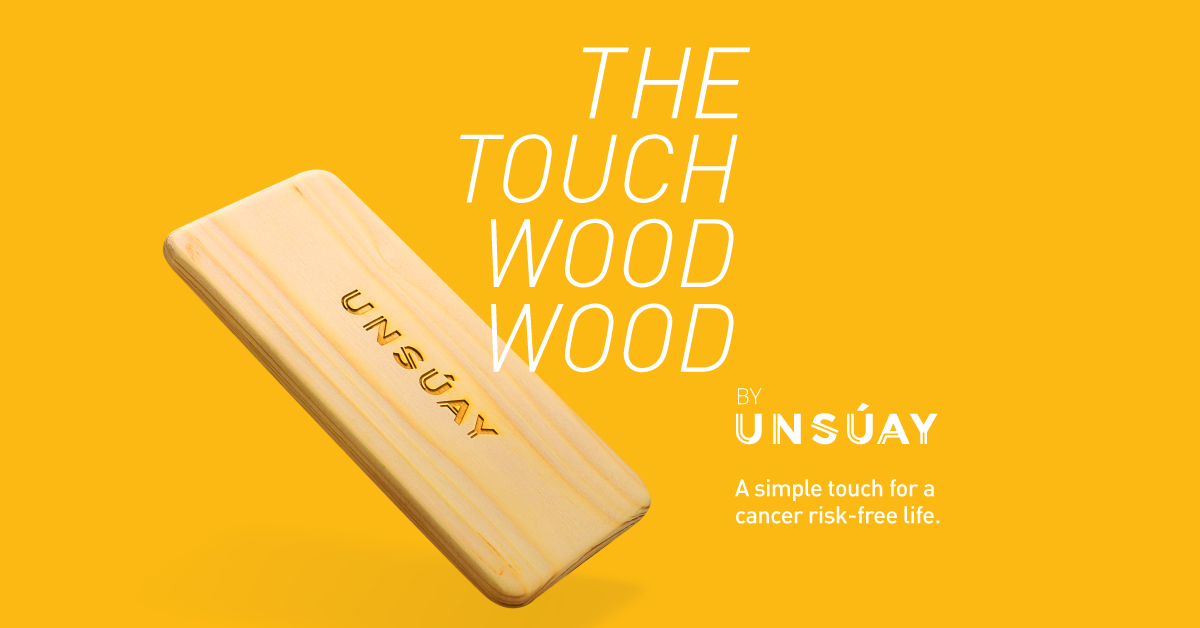