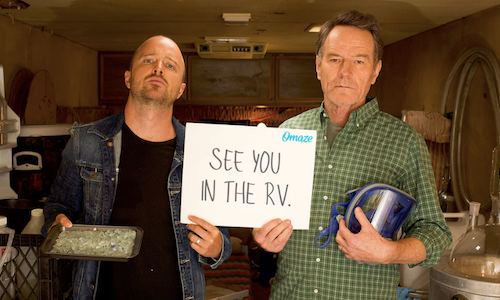 On the tenth anniversary of Breaking Bad's premiere, fans were hungry for content from the two iconic main characters, Walt and Jesse, played by Bryan Cranston and Aaron Paul. The two stars were eager to leverage the momentum of the anniversary for good, and teamed up with Omaze to offer fans a once-in-a-lifetime opportunity to relive the Breaking Bad glory days with them, all to benefit two amazing causes.

The objective of this partnership was to raise as much as possible for Kind Campaign, founded by Aaron's wife, and National Center for Missing and Exploited Children, of which Bryan has been a longtime supporter. Funds would be evenly distributed to the two causes, and then immediately put to use furthering their missions.

Omaze's platform offers people around the world the chance to win incredible experiences with $10 donations. In order to maximize funds raised, Omaze's creative team worked to develop a campaign that would resonate with the widest possible group of Breaking Bad fans.

To satisfy fan cravings for a cast reunion, Omaze, Aaron and Bryan offered one lucky fan the chance to be a part of the action - and win the chance to cook (breakfast) with them in the original RV.

Omaze timed the campaign to launch at the peak of fan excitement around the anniversary, when fan pages, social media and mainstream entertainment outlets would be buzzing with the anticipation of seeing the stars of the show reunite.

The launch video was the critical element to spread this campaign as far and wide as possible. It was important to not only capture the chemistry between the two actors, but also to satisfy audience cravings for new content from the duo.

To play into the theme of how badly fans missed the show, Omaze concepted a video and drafted a script around the idea that the stars miss it just as much as the fans do.

In the launch video, Aaron discovers Bryan has been living in the RV, obsessed with the idea of a potential reboot of the show. It's obvious that the two are trapped in the past, and desperate for someone new to talk about the show with. Together, they announce that they're offering fans the chance to come reminisce about the show and cook (breakfast) with them in the RV, to raise funds for two causes they're passionate about.

This video launched a 44-day campaign, and immediately engaged donors and media alike. At launch, Omaze engaged their PR team to kick off a comprehensive earned media strategy that ultimately garnered over 900 million impressions, as well as their email and performance marketing teams to make sure every channel was hyper targeting Breaking Bad fans. Bryan and Aaron also promoted the campaign on their own channels to engage directly with their fans and convert them into donors.

Throughout the remainder of the campaign, Omaze launched two additional videos - one to remind fans that there were only a few days left to enter, and a final video posted to Bryan's social pages.

These videos were strategically timed to sustain interest from fans and media throughout the campaign, and continually remind people that the more they donate, the more chances they have to win this epic experience.

The goal of this campaign was to reach as many fans as possible in order to maximize the funds raised to benefit these two causes. The campaign succeeded, going viral with three videos garnering over 15 million video views across channels throughout the duration of the campaign.

The viral nature of the experience and video also generated over 900 million media impressions across entertainment, lifestyle and broadcast outlets.

Over the 44 days that the campaign was live on Omaze.com, nearly 17,000 people donated for their chance to win. Donations poured in from over 105 countries around the world, helping Bryan and Aaron raise nearly $600k gross for Kind Campaign and National Center for Missing and Exploited Children.

Ultimately the campaign achieved the original goal of leveraging fan excitement for good, giving fans a way to engage with the stars, while also giving back to two causes they're passionate about.

And finally, Elissa from Stoughton, Massachusetts was randomly selected as the winner of this dream experience. She was flown to LA to cook breakfast with Aaron and Bryan in the original Breaking Bad RV in September 2018. 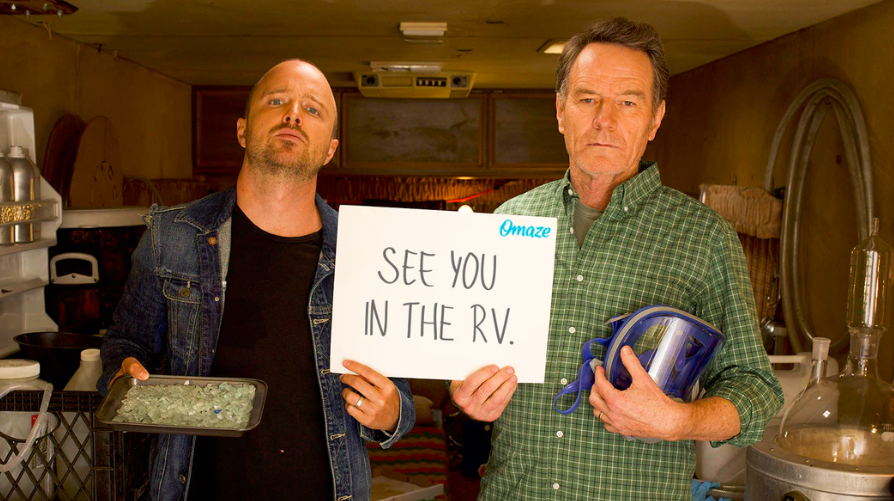