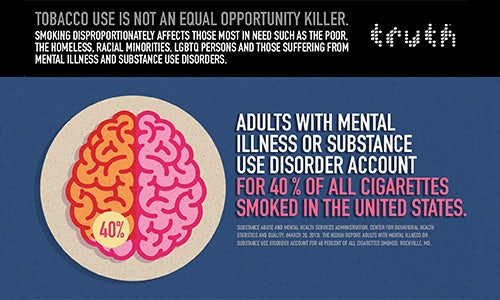 truth® is America's longest running and most successful national youth smoking prevention campaign, but many teen smokers have grown immune to warnings about their health. Lost is the fact that tobacco remains the number-one cause of preventable death in America, killing 540,000+ Americans annually. Our number-one goal remains unchanged: Decrease the smoking rate among U.S. teens. truth works to ensure each new generation of 15- to 21-year-olds doesn't start smoking. Engaging this audience is literally a matter of life and death.

Every year, truth revisits the challenge of finding unexpected ways to connect with Gen Z. Today's teens are the most inclusive generation that America has ever witnessed. Nothing fires today's youth up more than social injustice—and that insight fueled a new creative direction for truth.

For decades, the tobacco industry has exploited many populations—including African Americans, low-income communities and LGBTQ individuals—to sell its products. While the tobacco industry positions its practices as targeting and creating consumer choice, the facts reveal a darker pattern of exploitation. The much higher than average prevalence of tobacco use among these groups is not a coincidence.

What if today's inclusive generation were to learn this? Then be told they had the power to stop it? PR set out to expose and amplify this revelatory message by engaging and energizing the media, activist groups, teens and their influencers around one of the tobacco industry's darkest secrets.

The defining issue of Gen Z's time is social equality, so we had to showcase why smoking is a social justice issue. Today's teenagers don't like seeing themselves as tools of social injustice and corporate interests. The campaign would highlight the deliberate profiling of communities that face adversity and inequality, and the aggressive Big Tobacco practices that get them hooked on tobacco.

truth® exposed Big Tobacco's tactics by focusing on groups today's youth could unite behind to spread the truth and finish tobacco for good: the military and mental health. How would they feel knowing thanks to Big Tobacco's marketing efforts, like giving away free cigarettes to psychiatric facilities, individuals with mental health conditions account for 46% of U.S. cigarette sales? How would they feel that Big Tobacco targeted the military as "easy" prey for their marketing efforts, resulting in 38% of military smokers starting to smoke after enlisting?

PR would activate around a strategic pop-culture event, and energize the target audience to do what they do best: engage and share information via social and digital channels.

After seeding information with the help of influencers and an exclusive with The Washington Post, truth® leveraged a strategic pop-culture tentpole, the MTV Video Music Awards (VMAs), to debut the message on Big Tobacco targeting those with mental health conditions and military personnel.

Our goal is to decrease teen smoking. An annual study, released in December 2017, found that the U.S. teen smoking rate is at a historic new low of just 5.4%, representing a 9% decrease from a year ago – revealing thousands of potential lives saved.

New research published in the International Journal of Environmental Research and Public Health in December 2017 also finds that building brand equity among teens not only improves message recall, but also influences behavioral outcomes. Youth and young adults who feel more favorably toward the truth® brand are less likely to be current smokers, and for those who do smoke, the research shows that they are more than twice as likely to report intentions to quit within one year. Notably, the campaign achieved an awareness level of 81%, exceeding the 75% minimum awareness threshold to shift attitudes.

Gained support from Former Secretary of the Navy Ray Mabus, who spoke out against Big Tobacco's exploitative marketing practices.

Video for Business or Exploitation? 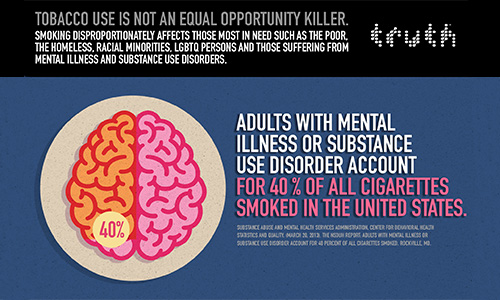